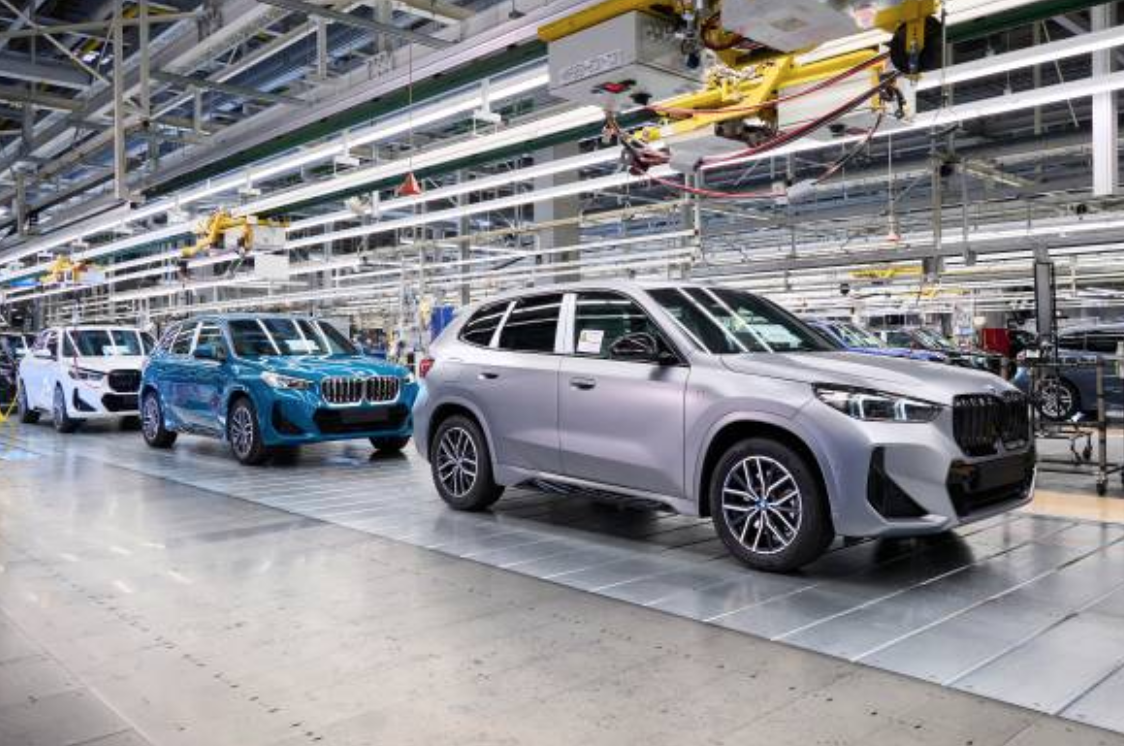 BMW has started series production of the iX1 electric SUV at the plant in Regensburg. Meanwhile, new details about the electric car platform New Class have been revealed by BMW development board member Frank Weber. At the same time, BMW will apparently continue to have electric cars produced in England for the Mini brand and will convert the Oxford plant for this purpose.

With the start of production of the iX1, ICE cars, plug-in hybrids, and fully electric models will be built on one line in Regensburg. In the case of the iX1, production in Regensburg makes additional sense: the high-voltage battery for the compact SUV is also built at the plant, so the transport distances for the ready-to-install battery are minimal.

Vehicle assembly is based on the principle of the ‘BMW iFactory’. A digital twin is to enable highly efficient planning of future plant structures and production facilities. The plant’s paint shop relies on the benefits of artificial intelligence, and AI is also used in vehicle assembly. Specifically, AI-assisted image recognition methods are there to support employees during quality inspections.

“We are delivering the goods. By 2024, at least one in three BMWs coming out of our Bavarian plants will be an electric car,” says Board Member for Production Milan Nedeljković.

Carsten Regent, Head of the BMW Group Plant Regensburg, adds: “The electrification and transformation of the plant give me optimism for the future. Our aim now – also with the new BMW iX1 – is to continue to impress customers all over the world with cars made in Regensburg.”

According to BMW’s R&D chief Frank Weber, the platform of the ‘Neue Klasse’ is flexible enough to cover electric cars from the 1 series to the large SUV X7. It is already known that the New Class will rely on round cells with a diameter of 46 millimeters at two different heights and a system voltage of 800 volts.

The abandonment of modules in favor of a “pack-to-open-body concept” was also already known. “Our highly focused pack-to-open-body concept pioneers for instance a truly innovative approach to battery integration and final assembly,” Weber now says. The ready-to-install battery packs should have an energy content of between 75 and 150 kWh, depending on the model. The battery can be varied not only in fixed module steps but much more flexibly.

There is also new information about the drive concept: According to this, up to four electric drives and outputs between 200 and 1,000 kilowatts are possible. However, most models will be offered with “a simple RWD and AWD configuration”, i.e. with one electric motor per axle. For particularly sporty models (such as BMW M), however, two motors per axle with torque vectoring are also possible. BMW relies on current-excited synchronous motors as it does in the current fifth generation.

Despite such battery sizes and performance, Weber does not want to neglect efficiency. “Going big on cell power and extreme range is not the solution, because the size and weight penalty are counter-productive,” BMW’s chief developer is quoted in the English magazine Car Magazine. “Instead, we must get the best out of every watt-hour by further reducing the rolling resistance, improving aerodynamics, and increasing the on-board energy efficiency.”

Weber’s latest statements do bring some further insights into the technology but do not end the communication fog surrounding the New Class. Every now and then, information about the ‘Neue Klasse’ is released that can sometimes be fully contradictory to messages delivered earlier.

Financial and other analysts have already criticized the unclear and partly contradictory statements by board members on the New Class: They’re now asking the question if they all really know exactly what this platform is all about.

According to a media report in the German newspaper Frankfurter Allgemeine Zeitung (FAZ), the board of directors of BMW Group wants to make a decision on whether the production of EVs in the Oxford plant (UK) will be continued before the end of the year.

Most recently, it was reported that Mini would stop producing electric cars in England in 2023 and relocate to partner Great Wall in China. “Oxford is not equipped for electric vehicles. It needs to be renovated and invested in,” the head of the Mini brand, Stefanie Wurst, said in The Times.

This is exactly what BMW is now apparently planning to do, contrary to earlier statements. Because the site in China and the plant in Leipzig, where the Mini Countryman is also to be produced as an electric car, are not sufficient on their own to meet the demand expected by the board, the assembly lines at the plant in Oxford are to be renewed. There’s no official comment yet from BMW on this allegation.

According to figures in the FAZ, BMW recently built 40 000 Mini Cooper SE and 140 000 Mini models with combustion engines in Oxford. This parallel production is currently still possible because the electric Mini is based on the combustion engine model.

With the upcoming switch to the new electric generation, which is being developed with Great Wall, the electric model will change platforms. Parallel production at the plant, which was built in 1913, was long considered inefficient and too costly because of the necessary investments. Apparently, this is to be reconsidered in Munich.