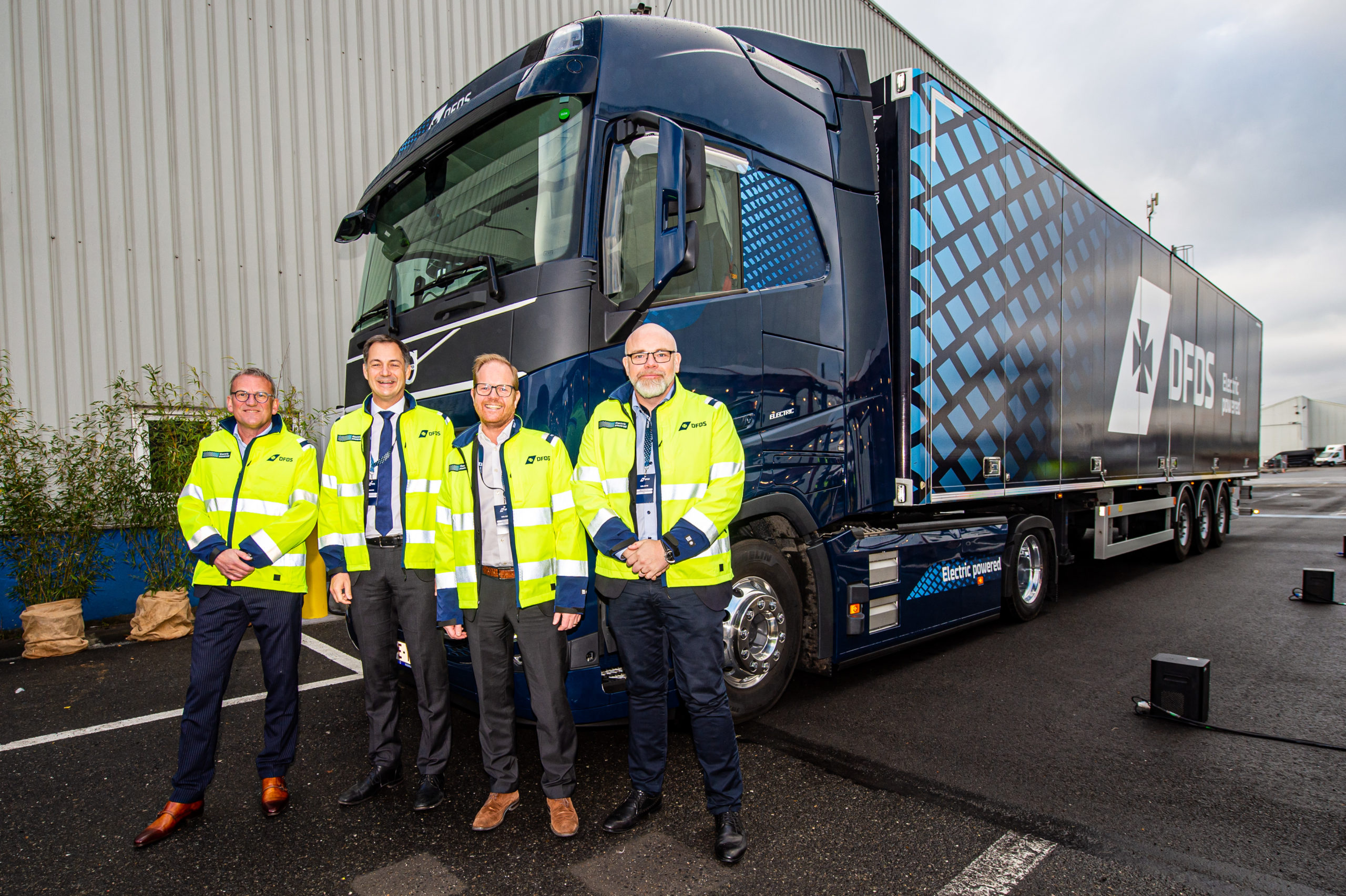 The Danish shipping company DFDS has ordered 125 e-trucks from Volvo Trucks. The first new Volvo FH Electric Truck was delivered in Ghent (Belgium) on Wednesday during a launch event in the presence of Prime Minister Alexander De Croo.

DFDS, one of the largest shipping companies in northern Europe, intends to run one-quarter of its fleet on batteries by 2030. The company already has some of its trucks running on LPG and wants to test the possibilities of hydrogen.

In 2021, DFDS and Volvo Trucks initiated a joint project for sustainable road transport. After an initial trial period in Gothenburg, Sweden, the new Volvo FH Electric Truck was delivered at a launch event in Ghent on 16 November.

“Just like we’re looking for alternative fuels for our ships,” explains Jelle Van Koevorden, managing director of DFDS. “A huge challenge. But we need to make the transition as quickly as possible.”

About twenty of the 125 e-trucks will be riding on Belgian territory, in the port of Ghent area, to be specific. “They will transport trailers and containers, arriving by train or inland boats, to the customer,” says Van Koevorden, “and for local transport, for the last mile.”

DFDS operates a multi-modal logistics hub out of the terminal in Ghent with six ships a week between Ghent and Gothenburg, handles 20 trains between Sweden, France, Italy, Austria, and Belgium, and six container barges between Ghent, Rotterdam, and Antwerp per week.

DFDS wants to create sustainable ‘green corridors. The company, therefore, wants larger ships, smaller barges, and green trucks. For the electrification of its trucks, DFDS asks for long-term commitments from partners and governments.

“Green transport corridors across the Delta region and indeed across Europe are central to delivering on the European Green Deal. For green corridors to become a reality, we need innovative partnerships and strong commitments from the industry as well as governments to invest in key infrastructure such as electric charging stations and hydrogen refueling stations,” says Niklas Andersson, EVP Logistics in DFDS.

Volvo Trucks started series production of the fully electric range of its popular heavy trucks, the Volvo FH, Volvo FM, and Volvo FMX, in the Tuve factory in Gothenburg, Sweden, and is prepping its Ghent (Belgium) factory to follow next year.

Ghent will play a significant role in the group’s electrification, including battery manufacturing. By 2030, more than half of the 50 000 trucks that will be built in Ghent by then will be battery-electric (BET). Electric and hydrogen trucks will be mixed on the same production lines as diesel trucks.