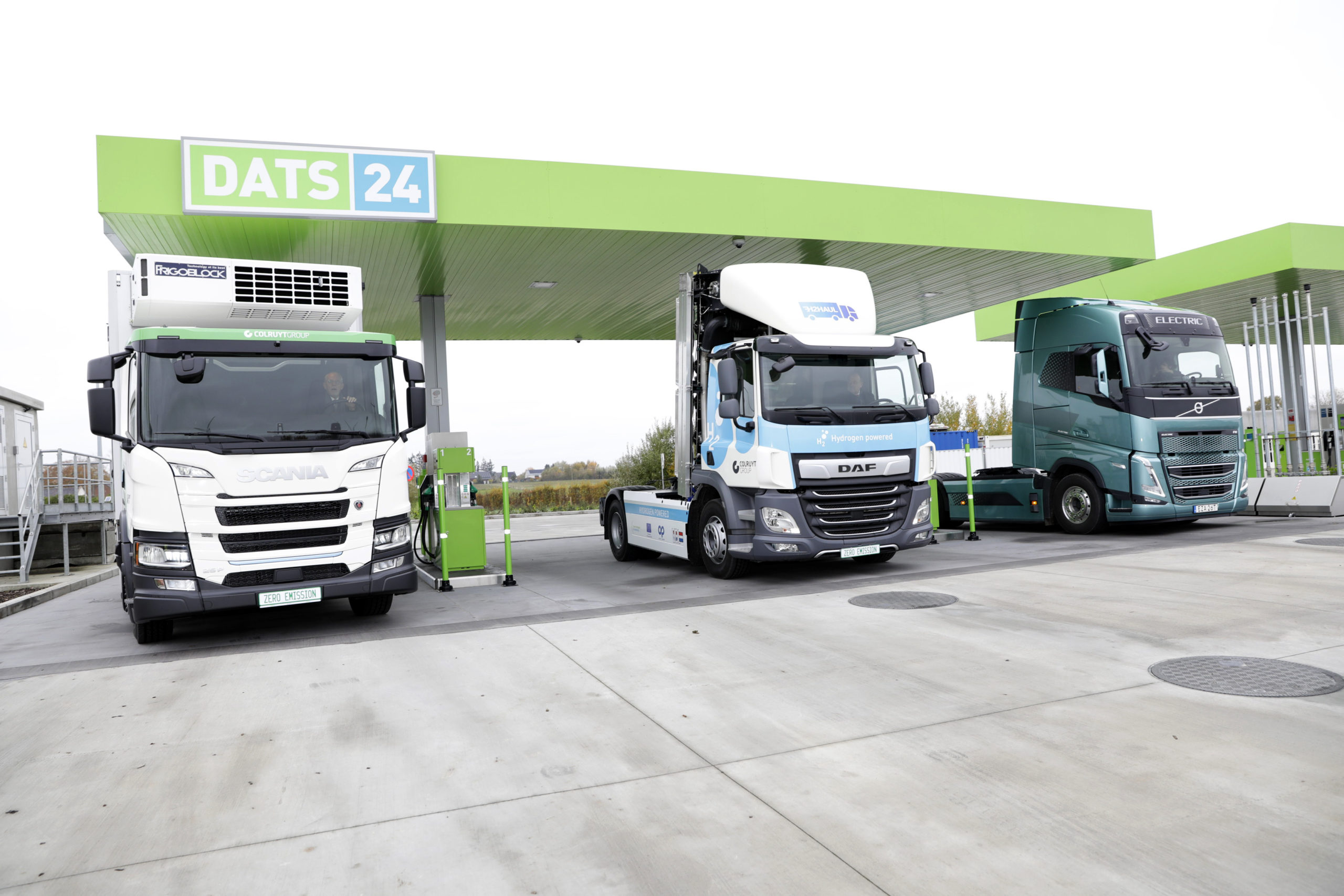 Colruyt Group believes in the future of electric trucks for greening its transport chain, but also in hydrogen as it opened its fourth H2 public filling station in Belgium /Colruyt

Belgian retail giant Colruyt Group will have its own truck fleet running on electricity or hydrogen by 2030 and forces all its suppliers to deliver using zero-emission transport by 2035. CEO Jef Colruyt announced the latter at the opening of the group’s fourth DATS 24 hydrogen station near its distribution center in Ollignies.

According to Colruyt, some 640 000 client push carts a day are rolling out of its retail stores in Belgium. To supply them, 700 drivers are doing daily, on average, some 200 000 km in total. Colruyt wants them all – those supplying the supermarkets and those bringing the goods from the manufacturers to the distribution centers – to do that with zero-emission trucks by 2035.

For Jef Colruyt, who has been a forerunner for environmental change for years, it’s very important that the whole supply chain follows the company’s example. “It is very important for us to have an impact throughout the chain. We do this not only by looking at ourselves but also by actively engaging with our transport partners and suppliers“, the CEO adds.

“We really want to focus on that actively. We put our money where our mouth is and even want to inspire our customers to do the same with an eco-savings program on products for local environmental projects.”

By 2030, Colruyt Group wants to decrease its total carbon footprint caused by refrigeration, heating, energy, and mobility by another 42%. More than a quarter of all emissions are linked to its transport fleet’s fuel consumption.

The Belgian retailer has a long history of pioneering with renewable energy. It started experimenting with electric trucks in 2005 and has its entire forklift truck fleet in its central distribution center in Halle, running on green hydrogen, self-produced on-site with wind energy.

It’s Virya Energy daughter was founded in 2019 by Colruyt Group and the family investment group Korys to combine their respective renewable energy holdings. It currently participates in off- and onshore wind parks of Parkwind, Eurowatt, and Eoly Energy. It delivers extensive in-house expertise in the production of green electricity and hydrogen.

Hydrogen to be complimentary

Jef Colruyt believes electric trucks will play a significant role in greening the transporter chain, but hydrogen will be complimentary. “We believe electric driving can become the broad norm; it is becoming more and more established, also in a professional context,” he explains.

“Hydrogen will also play an essential role in the industry, in logistics processes, and in transport activities. Ultimately, the most important thing for us is that there is an evolution toward efficient and smooth transport with the smallest possible ecological footprint.”

Colruyt’s belief in hydrogen for transport is shown on the field by opening its fourth DATS 24 hydrogen filling station in Belgium, at Ollignies (Hainaut province). DATS 24, Colruyt Group’s energy and fuel supplier, opened its third H2 filling station at the Researchpark in Haasrode (near Louvain) in July 2022.

Two others are located at Halle (near Brussels) and Wilrijk (near Antwerp), and two more are to open soon at Erpe-Mere (East-Flanders province) and Herve (Liège province). It will bring the total number of hydrogen stations in Belgium to eight.

A recent study by PwC endorses the claim that electric trucks are the future. BETs are expected to outperform classic diesel trucks with an internal combustion engine (ICE) from 2025 onward in the total cost of ownership. The study shows that fuel cell trucks (FCT) will reach that point in 2030, while the cost advantage for the battery-electric truck will be 26 to 34%.

Another study by the Dutch technical research institute TNO about the possible uptake of zero-emission trucks to replace diesel in the coming years confirms that. It shows the battery-electric truck (BET) is the most cost-effective (only) option from 2030. This study warns that fuel cell trucks will play a marginal role due to higher costs.