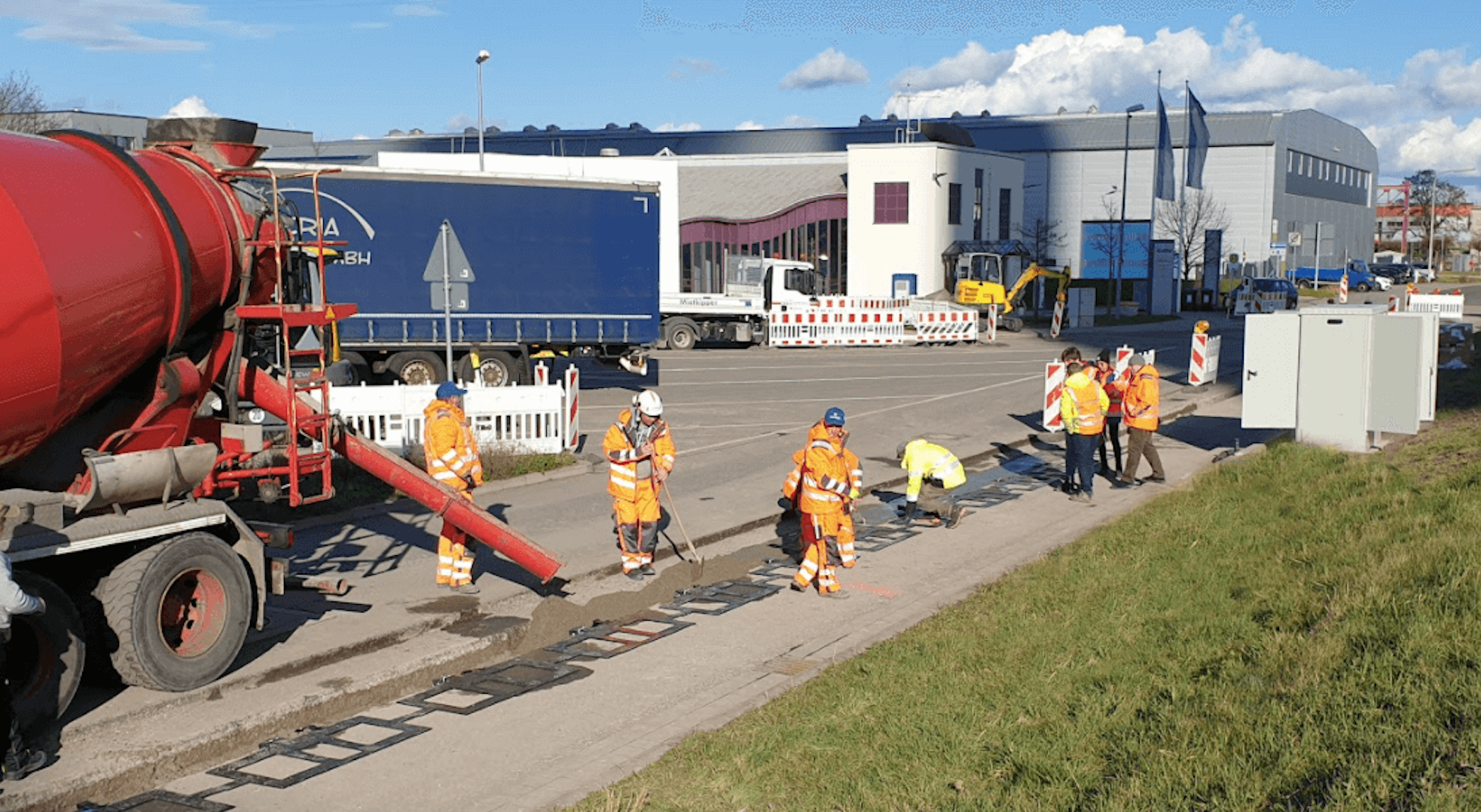 Workers laying the wireless road in Karlsruhe, another ElectReon project in Germany /ElectReon

For the first time in Germany, dynamic wireless charging technology for electric vehicles is being tested in practice. The main actor of the pilot project in Balingen is a shuttle bus for the Garden Show 2023, which is to charge its vehicle battery while driving.

The Israeli company ElectReon, which specializes in inductive charging of e-vehicles, will set up an initially 400-meter-long Electric Road System (ERS) under the asphalt for the project, as well as two inductive stationary charging stations. In a later phase of the project, it is planned to extend the appropriately prepared road section to one kilometer.

In addition to ElectReon Germany, the project partners are EnBW, the Karlsruhe Institute of Technology (KIT), and Stadtwerke Balingen. The entire project is also under the auspices of the German Aerospace Center (DLR) and operates under the title ELINA (Einsatz dynamischer Ladeinfrastruktur im ÖPNV).

The shuttle bus route for the Garden Show leads from the car park on the exhibition grounds to the city hall bus stop. According to a statement by EnBW, the dynamic charging process will take place in the Wilhelmstraße. There, the magnetic coils are inserted under the roadway.

“When the bus approaches this point, high-frequency magnetic fields are generated there. These induce an electric current in receiver coils on the floor of the bus, which is used to charge the battery,” EnBW describes the charging process. Inductive stops are also planned at the final stops, city hall ‘Stadthalle’ and the exhibition center ‘Messegelände’. There, the bus will charge by induction while stationary.

In the aforementioned second stage, those responsible for the project want to equip further routes in the Heimlichenwasen and in front of the Lauwasen school with magnetic coils – and thus extend the Electric Road System to one kilometer. In addition, another inductive stop is to be set up in the bus depot, thus extending the project to regular service.

While ElectReon provides its Dynamic Wireless Power Transfer (DWPT) technology, KIT contributes a planning tool that optimally coordinates the line’s route and the charging stations’ locations. “The software combines traffic modeling, vehicle simulation, and optimization of the charging infrastructure,” specifies Markus Tesar from KIT. “Our goal in the ELINA project is to validate the new planning tool with data from real operations in Balingen.”

Meanwhile, Stadtwerke Balingen is taking care of the electric bus operation, and EnBW is managing the project and setting up and operating the charging infrastructure. “The project in Balingen shows how innovatively and consistently we are promoting e-mobility in Germany,” emphasizes Alexander Pöllauer from EnBW’s Research and Development division, who is leading the trial.

“We have a holistic approach and want to make wireless charging technically fit for German public transport. This also includes convincing authorities, energy network operators, bus operators, and the general public of the opportunities,” he adds.

According to ElectReon, this is not the first pilot test of DWPT technology in Germany. The Balingen project follows a successful pilot project with ElectReon technology in the city of Karlsruhe in cooperation with EnBW, the company says in its statement: “An electrified road was installed at the EnBW training center, which supplies a public bus with electricity at peak times.”

ElectReon and the road construction company Eurovia are planning another project in Germany. Specifically, it is a project funded by the German government called E|MPOWER. This project, which started in July 2022, aims to integrate ElectReon’s technology on a one-kilometer section of a highway in northern Bavaria.

For now, the focus is set on Balingen. Within the framework of this project, ElectReon says it will receive up to €3,2 million for its part in the project.