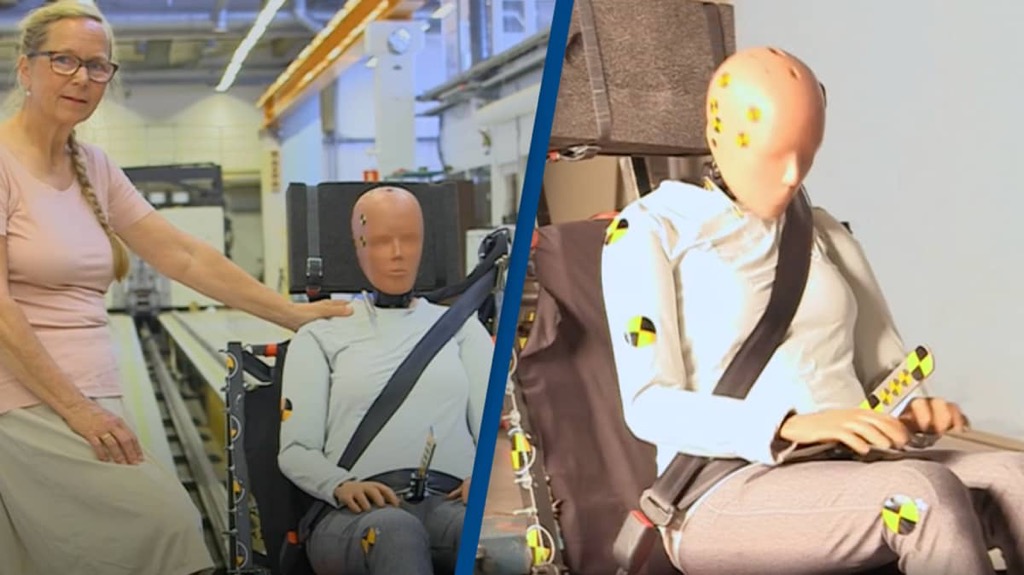 The female dummy Astrid Linder created is based on the average of a woman. The figure is 166 cm tall and weighs 62 kg /inulad.com

Swedish engineer and researcher in motor vehicle safety, Astrid Linder, has developed the world’s first female crash test dummy. Linder and her team are convinced that this research can help shape the way cars will be built in the future by highlighting key differences between men and women. Some of them include females being shorter than males, with different muscle strengths.

Passenger cars have become safer, but women are still 73% more likely to be severely injured or die in a frontal crash than men and three times as likely to experience injuries such as broken bones. According to Astrid Linder, injury statistics show that the gap between men and women isn’t decreasing despite significant improvements in crash safety.

Until now, the standard crash test dummy was based on an average male model weighing 75,5 kg. When trialing car safety for women, some manufacturers used a smaller version of the male dummies. A pregnant crash test dummy was developed in 1996, but testing with it is still not government mandated either in the US or in the EU.

After calling on the government to take action, Dr. Linder and her team stepped up to the challenge by creating the dummy, known as a ‘seat evaluation tool’.

‘Women should be angry’

In November, Linder and her team wrapped up a 4½-year project funded by the European Commission and Volvo Car AB to create and test the dummy in a laboratory in Linköping, Sweden.

“Frankly, women should be angry,” Christopher O’Connor told the Bloomberg agency. He’s the chief executive officer of Humanetics Group, the Farmington Hills, Michigan-based industry leader in crash test dummy manufacturing, which has supplied automakers globally since the 1960s. “A car should be safe regardless if you’re a male or a woman in every seating position.”

The female dummy Astrid Linder created is based on the average size of a woman. The figure is 166 cm tall and weighs 62 kg. The team accounted for differences in joint stiffness and strength between men and women. It mainly focused on the motion of the spine, neck, and shoulders to replicate as much as possible how a woman’s body would interact with a car seat in a crash.

Car manufacturers, like Volvo, are interested but relatively restrained about buying them. Some prefer to continue to work virtually. Moreover, dummies represent a significant investment; the price of such a device usually is about one million dollars.

It’s encouraging that protecting car occupants has moved “beyond that of a midsize male,” says Jessica Jermakian, head of vehicle research at the Insurance Institute for Highway Safety (IIHS), a nonprofit financed by the US insurance industry. “But simply putting a female dummy in the driver’s seat won’t automatically result in safety improvements for women,” she says.

“We need to think of ways of how we can reduce speeding, ways to prevent crashes altogether, ways that we can remove that incompatibility between larger and smaller cars.”

Research published last year by IIHS found that much of the heightened risk for women in crashes is related to the types of vehicles women drive and the circumstances of the collisions rather than physical differences.

Women tend to drive smaller, lighter cars, and they’re more likely than men to move the struck vehicle in side-impact and front-into-rear crashes, according to IIHS.

Who is Astrid Linder?

Astrid Linder is an Adjunct Professor in Injury Prevention at Chalmers University and Research Director of Traffic Safety at the Swedish National Road and Transport Research Institute (VTI), responsible for developing the research area crash safety and biomechanics.

Traffic safety, models of the human in crash testing, injury prevention, and crash-related countermeasures are the main fields of her research activity, in which she has extensively published and presented around the world during the last two decades.