Except for a teaser image on the website where people can already join a waiting list, little is known of the Lightyear 2, which was only ‘masked’ unveiled at CES Las Vega /Lightyear

Hours before the official ‘unveiling’ of the first teaser pictures of its second solar car at the Consumer Electronics Show in Las Vegas, the Dutch scale-up opened on Thursday the waiting list for the Lightyear 2.

This one, a more compact ‘grid-independent’ sedan with integrated solar panels and a range of +800 km, gets an ‘affordable’ target price of €40 000, way below the €250 000 of the Lightyear 0. At CES, the company said production of the Lightyear 2 would start at the end of 2025. Nevertheless, it claims it has already 21 000 pre-orders from international leasing and ride-sharing companies, including LeasePlan, MyWheels, Arval, and Athlon.

The free and non-binding waiting list promises people a guaranteed ranking when ordering opens. Still, timing other than that the car is expected in 2025, one year later than initially suggested, isn’t available yet. Since November 2022, the Dutch start-up has been building at contract manufacturer Valmet Automotive in Finland, the Lightyear 0.

Of this one, 946 will be built, a symbolic number referring to the length of a lightyear, 946 trillion kilometers. The prototype, Lightyear One, became the Lightyear 0 (zero), with the initial list price of €150 000 beefed up to a whopping €250 000, and production, initially to start in 2021, was ultimately delayed until late 2022.

With a drag coefficient of 0.175, the Lightyear 0 today is the world’s most aerodynamic series production sedan. Like or lump it, despite the Chinese brand Aion, a subsidiary of GAC, claiming its hyper GT in development to be the sleekest one, but featuring a Cd value of just 0.19. Mercedes’ visionary EQXX cleaves even better through the air with a Cd of 0.17, but this is a one-off concept car.

Thanks to Lightyear’s patented technology, the Lightyear 0 has five square meters of double-curved solar panels. It consists of 782 IBC monocrystalline silicon solar cells arranged in 28 groups and can provide up to 70 km of additional range per day in sunny regions like southern Spain.

The car has a 60 kWh battery pack aboard, contributing 350 kg to the vehicle’s 1 575 kg total weight, which is made to a great extent out of carbon fiber. That battery ensures 625 km of (WLTP) range on a single charge. On a very sunny day, this could be pushed up to 695 km with solar panels.

Wait and see what the Lightyear 2 will have to offer exactly, but the company promises future owners a +800 km range and three times less charging at the grid will be needed than a conventional EV.

“By harnessing the power of the sun, Lightyear 2 elevates the electric driving experience and reduces reliance on strained electricity grids. In fact, while Lightyear 2 vehicles require less charging from the electricity grid than a conventional EV, they also flip the script by providing clean energy back into the grid,” says Lex Hoefsloot, CEO and Co-Founder of Lightyear in the press release. 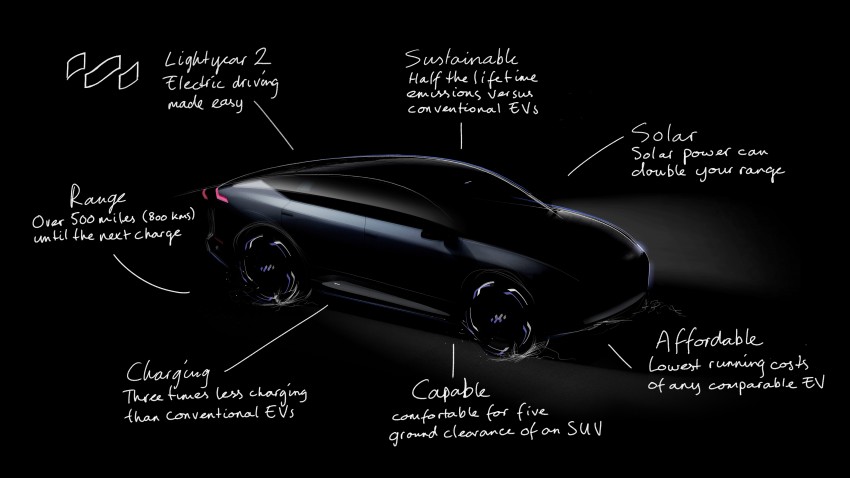