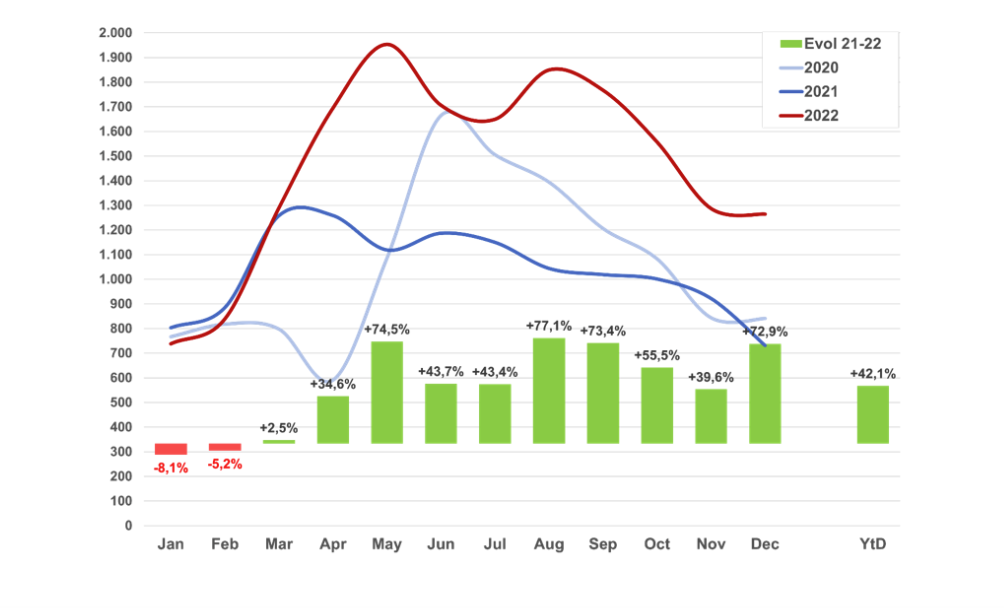 Also, second-hand speed pedelecs are breaking all records. In December, Traxio listed a record number of 337 vehicles (+34,3%), bringing the total number of used speed pedelecs sold in 2022 to 5 671 units, representing an 87,8% growth compared to 2021.

Remarkable is that the number of registrations is growing in all provinces. Antwerp was always a forerunner, but other provinces are catching up. Last year, East Flanders, with a total of 4 187 registrations, even took first place before Antwerp (4 103 units), usually the most speed pedelec-minded province in Flanders.

Brussels and the Walloon provinces are also gradually showing more interest in the speed pedelec: Liège (+45%), Hainaut (+43%), and Namur (+43%). The Brussels Capital Region registered a 36% growth.

According to Filip Rylant, spokesperson for Traxio, the registrations of speed pedelecs in 2022 continued to surprise month after month. “December, usually a dark and cold month, ended the year with a record number that was 72,9% higher than last year. In this way, 2022 became an absolute top year. Never before have so many high-speed bicycles been sold.”

Stefaan Lampaert, general secretary of Traxio Velo: “The car is increasingly coming under pressure from taxation, and we see a further shift to electric bicycles, which is beneficial for employers and employees. In December, we also noted a strong increase in the number of leased bicycles, possibly due to the introduction of ‘cafeteria plans’ in many companies and the attractive mileage allowance for employees.”

Private individuals still accounted for almost half of sales last year: 46,9% (8 247 units) were private purchases. In addition, leasing is becoming increasingly popular, with 6 701 units or 38,1% of the market. An increase of +52%.

“More and more companies discover the ease of use of leasing: less administration, no worries about maintenance, insurance, or residual value because everything is neatly arranged for them and the employee,” explains Lampaert.