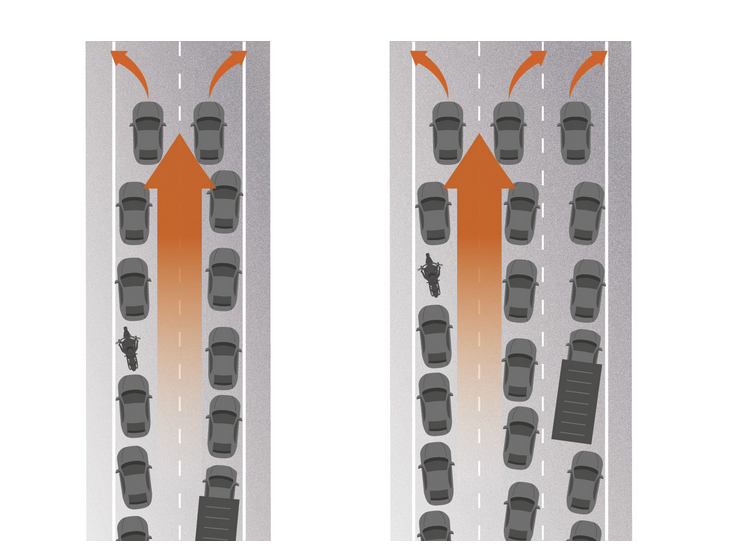 As soon as a traffic jam forms and traffic slows down, drivers should steer to the extreme left and right to create a clear path for the emergency services /wegenenverkeer.be

According to the mobility organization Touring, Belgian drivers still don’t understand the principle of the emergency lane. Despite the information campaigns the authorities conducted, many road users still are unaware of the regulation introduced in Belgium two years ago.

Forming an ’emergency lane’ to give priority vehicles a clear path through traffic jams became mandatory in Belgium from October 1st, 2020, on all roads with at least two lanes in each direction. Both on highways and regional roads and within city areas.

As soon as a traffic jam forms and traffic slows down to a walking pace, drivers should steer to the extreme left of the left lane and the extreme right in the other lane to create a clear path. By the time Belgium introduced it, the measure already existed in Germany, Austria, the Czech Republic, and Hungary.

It was Touring who launched the proposal some years ago. However, a recent survey shows that the principle does not take hold yet, and that hardly anyone spontaneously clears the road to let the emergency services through. That is why the organization welcomes and supports the new sensitizing campaign of the Agency for Roads and Traffic (Agentschap Wegen en Verkeer, AWV).

According to Touring, awareness-raising remains necessary. “It is important that information is also provided abroad since Belgium is a transit country where much foreign traffic passes.”

If every road user respects the ’emergency rule’, the emergency services will be on-site much faster. Furthermore, it increases the chances of survival of people involved in accidents. Fines for not respecting the emergency regulation can cost up to 174 euros.