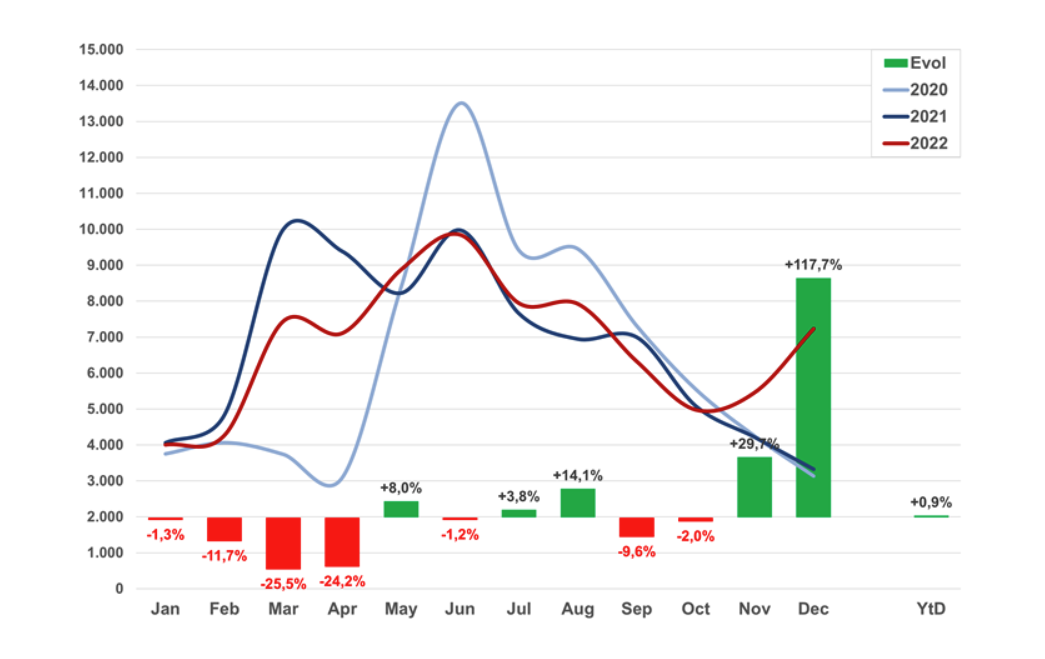 This illustration shows the evolution of second-hand motorbike registrations in 2022 /traxio.be

According to mobility federation Traxio, the market for second-hand motorbikes experienced an exceptional end of the year. In November 2022, the number of registrations went up by 29,7%. In December, figures even increased to 117,7% (+7 235 units), bringing the annual total to 81 436 registrations (+0,9%).

Why this peculiar final sprint? “This unusual year-end is due to the technical inspection of second-hand motorcycles, mandatory since January 1st, 2023,” explains Filip Rylant, spokesperson for Traxio.

The measure led to the fact that, on the one hand, many used motorbikes were quickly resold before the end of the year, and, on the other hand, non-registered motorcycles quickly were matriculated by their owners to avoid the mandatory inspection.

As a consequence, Belgium will register fewer second-hand motorbikes in the coming months, and more used motorcycles will probably be shipped abroad, mainly to the Netherlands.

Sales of new motorcycles declined slightly last year (-2,9%), mainly due to shortages and delivery problems. “As a result, we saw a shift in the market to second-hand vehicles, and the prices of used motorbikes, therefore, peaked to unprecedented heights. Candidate-buyers probably opted for faster purchase and registration before the technical inspection was introduced.

Traxio’s figures for the second-hand market in December 2022 show that, among the top 10 brands, a disproportionate number of second-hand Ducatis (+208%) and Harley-Davidsons (+166%) were registered. Japanese brands, BMW, and Triumph also did well. It’s also remarkable that Honda is number one in all classes of less than 1 000 cc, followed by Yamaha.

Accident statistics, however, show that technical defects represent only a small minority (less than 1%) of cases at the root of accidents. A better road infrastructure, protective motorbike clothing, and, above all, better driver training can save much more grief.

In April 2021, hundreds of motorcyclists protested in Brussels against introducing a compulsory periodic motorbike inspection similar to the one for cars. The activists stated that motorists maintain their motorbikes very well because their safety depends largely on the vehicle’s technical condition. They also pointed out that the greatest dangers of motorcycling lie in the inattention of other road users and the often poor road surface condition.

Also, France announced it would implement the European directive and force motorbikes to undergo a technical inspection every two years, but the measure, which is primarily designed to combat accidents and pollution, was badly received by French motorcyclists. France is still one of the few European countries that have not yet introduced controls for motorbikes.

In the spring of 2021, several thousand motorcyclists demonstrated across France against implementing this technical control, demanding the State to derogate from this European directive.

In the meantime, France has buried its plans to impose this technical inspection of motorbikes. President Macron buried the decree the day after its publication on Tuesday, July 26th, in the Official Journal, as he had assured in the past that it would never be applied. For the President of the Republic, “this was not the time to bother the French”, an adviser to the executive explained.

Meanwhile, figures show that the risk is lowering in countries where roadworthiness tests (16 times in Germany, 17 times in Spain) are implemented.