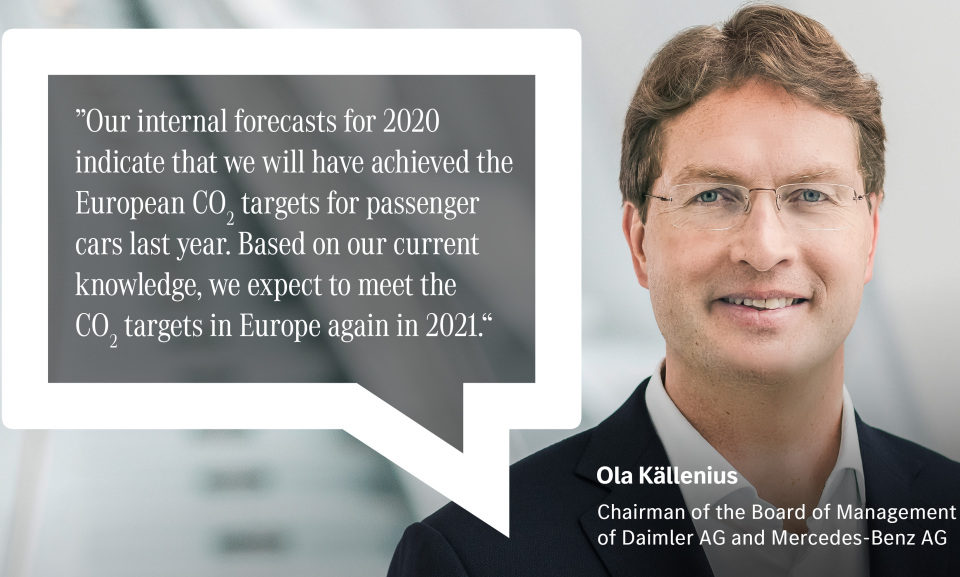 Ola Källenius, the man at the wheel at Mercedes-Benz AG, is confident Daimler gets the EU targets. Thanks to Angela Merkel’s government, partly /Daimler

“Our internal forecasts for 2020 indicate that we will have achieved the European CO2 targets for passenger cars last year. Based on our current knowledge, we expect to meet the CO2 targets in Europe again in 2021,” says the man behind the wheel at Daimler, Ola Källenius. And this comes somewhat as a surprise as analysts feared that Daimler wouldn’t make it a few months ago.

Actually, it was the fourth quarter with a tremendous ramp-up in what they call ‘xEVs’ that saved Mercedes’ skin. Government incentives in France and Germany did the trick. Of the total of 160 000, more than half (87 000) xEVs were sold after summer. It increased the xEV share from 2% in 2019 to 7,4% last year.

Based on figures of half 2020, according to NGO Transport & Environment, Daimler still had to bridge a gap of 9 g/km to get the 95 g/km targets set by the EU to avoid monster fines.

Out of the danger zone

Daimler, which is still selling many high-performance premium cars and heavy SUVs, sat clearly in the danger zone. Accompanied by Jaguar Land Rover that was also limping behind with an even bigger problem of 13 g/km, despite its effort with PHEV versions of its bestsellers and the full-electric i-Pace.

Time for action, they thought in Stuttgart, and started restructuring and intensifying the electrification of the entire portfolio. And with a little help from Angela Merkel’s government, introducing an incentive program for EV sales after summer, it worked.

BEVs increased by 206% in Germany

Despite an overall regression in new car sales of 20% in Germany, alternative drive systems (battery-electric, fuel-cell, plug-in hybrids, and gas) took up a quarter of all new registrations in 2020.

A total of 394 940 electric-powered cars were sold, with all-electric cars (194 163) seeing an increase of 206%, according to the KBA (Kraftfahrt-Bundesamt), the German Federal Motor Transport Authority.

Mercedes-Benz saw its sales of PHEVs almost quadruple, with more than 115 000 sold. The PHEV versions of the E-Class, A-Class, and C-Class were in demand the most. Shortly after the introduction of the premiums, the plug-in A-Class sold out at a given time. Not surprising, as the price of the A250-e with the premium deducted, dropped below that of the gasoline A180.

In the field of all-electric cars, the Mercedes EQC accounted for sales of approximately 20 000 units, the EQV for 1 700, and the electric Smart topped at 27 000 units. The latter nearly doubled its figures (+45,6%) compared to the year before. In 2021, four new all-electric models will be introduced:  the EQA, EQB, EQE, and EQS.

Mercedes’ main competitor in Germany, BMW, already achieved its goals in July of last year, before the actual boom in Q4 in Germany. According to T&E’s analysis, PSA, Volvo, and Tesla-FCA have achieved their 2020 targets also in summer already. For FCA, this was entirely due to ‘buying’ credits from Tesla. Otherwise, it had trailed by 17 g/km at that time. 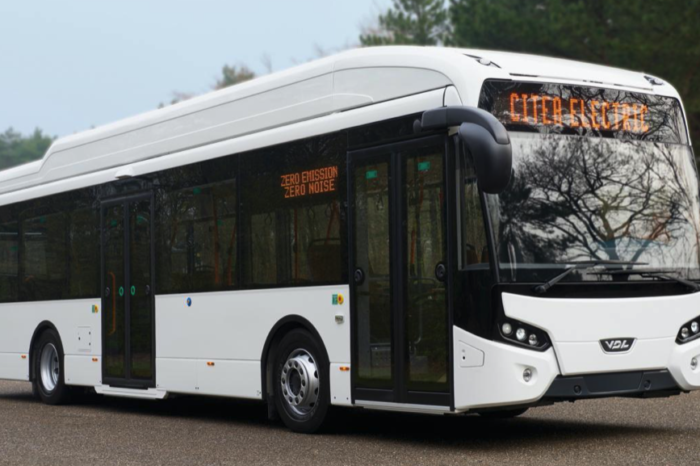 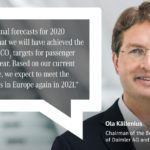