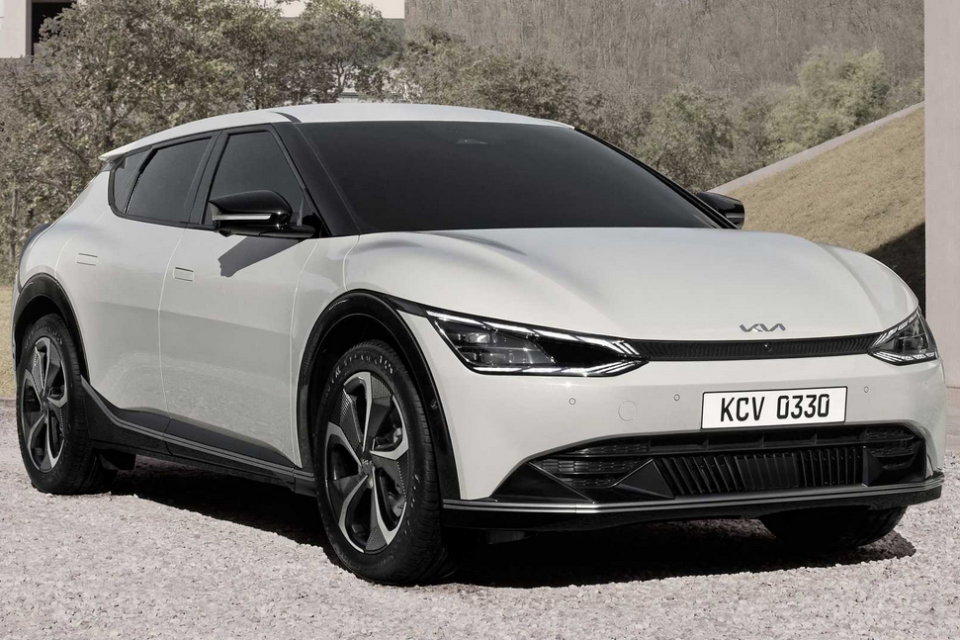 The new full electric EV6 is a milestone for Kia on several technical levels, but also on the new design language of the South Korean carmaker. Kia uses an abundance of highfalutin terms to describe the philosophy behind it, but it is simply beautiful /Kia

On Monday, Kia disclosed its first fully electric car EV6’s design details, designed as such on the new E-GMP platform. It’s a milestone for the South Korean carmaker’s future models, featuring a new sleek design for the brand’s future. And one has to admit it’s quite appealing.

Although technical details are yet to be unveiled at the end of this month, expectations based on the E-GMP platform, shared by the new Hyundai Ioniq 5, are high. That includes long-range capabilities up to 500 km and ultra-fast charging due to the 800-Volt technology.

The EV6 marks a new electric era at Kia in several ways. Beginning with naming all-electric Kia models in the future, starting with ‘EV’, succeeded by a number to indicate their position in the future line-up. The EV6 is the first to be built on the new dedicated Electric-Global Modular Platform (E-GMP).

It’s also Kia’s first 800-Volt-based EV, which will be capable of fast-charging 100 km range in five minutes or from 10  to 80% of its battery capacity in only 18 minutes. And there is the new design that will be the brand’s signature for the future.

The EV6 is, as expected, a sleek five-door crossover with ample legroom inside. That’s one of the benefits of the E-GMP platform and the car’s flat floor housing the batteries. The whole car has a modern, sleek, and aerodynamic design. The latter is amplified by the air being channeled through and under the car’s flat floor. 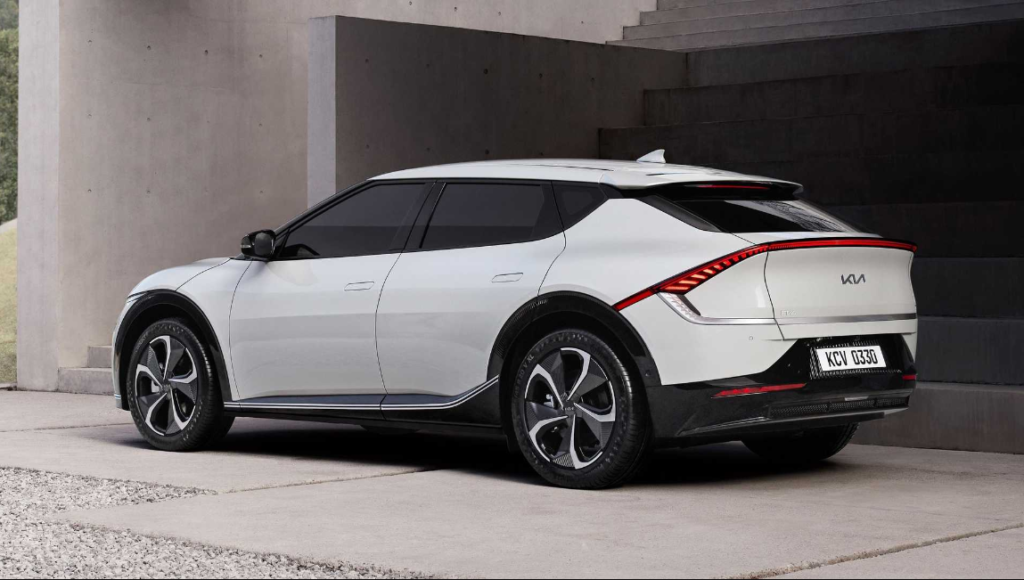 Kia’s design teams in Namyang (Korea), Frankfurt (Germany), and Irvine (California, US) have thought up under global chief designer Karim Habib a completely new design philosophy based on five pillars.

According to the press release, the first is Bold for Nature, which is “based on interaction with nature, informed by the details, shapes, and proportions found both in the natural and human worlds.”

“Joy for Reason focuses on the feel and ambiance of Kia’s future vehicles. Future designs will fuse the emotional with the rational, creating vehicles that influence passengers’ mood by relaxing and inspiring. It will also influence the adoption of new organic materials and more daring colors, expressing a sense of youth and playfulness.”

“Power to Progress builds on the brand’s current design strengths. By drawing on and developing the skills and expertise learned throughout Kia’s recent era of design-led transformation, the designs and layouts of the brand’s future products will continue to evolve.”

“Technology for Life embraces new technologies and innovations to foster positive interactions between humans and machines. The brand’s future vehicles will adopt a next-generation in-car user experience (UX) through design, innovation, and advancements in lighting, feel, and in-car connectivity – to help customers engage with their cars.”

“Tension for Serenity evokes the tension between opposing forces and creative contrasts and recognizes the design equilibrium that comes from two opposing forces. It delivers striking design concepts that use sharp, highly technical details to create surface tension – and realize a harmonized, future-oriented design vision.”

Suppose you ask us; a lot of highfalutin terms to describe what has to be viewed to be appreciated: a beautiful sleeky design that has the ability to seduce. Not only the exterior but also inside the cockpit.

Dash-screen curved toward the driver

What catches the eye is the high-definition audiovisual and navigation (AVN) screen, slightly curved toward the driver. It reminds of the BMW E39’s of the past, among others, with their console turned to the driver. A curved screen like this also surfaced in the BMW iNext concept and the iX. 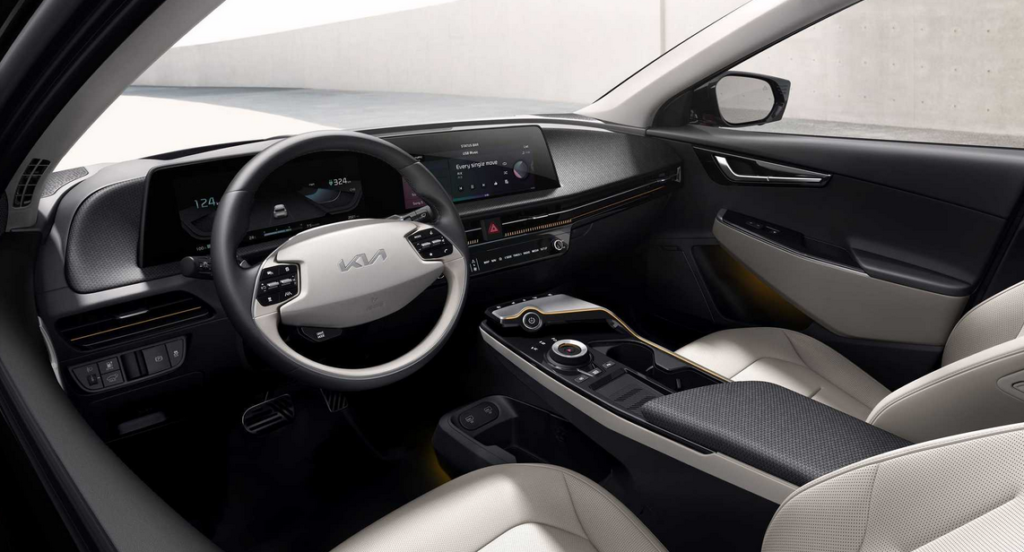 There are a minimal number of physical buttons, which keeps the design sleek and uncluttered. ‘Haptic’ touch buttons beneath the curved screen for the ventilation, heating, airconditioning, the usual buttons on the steering wheel, and a simple rotary knob on the center console to select the driving mode, where also the start button is located.

Kia plans to disclose the full features of its ‘milestone’ EV6 on Tuesday, 30 March, with an exclusive online event for 300 media. If prices are right, this new Kia EV6 could become an instant success, like the enthusiastic preordering run on its sibling, the Hyundai Ionq 5, seems to predict. 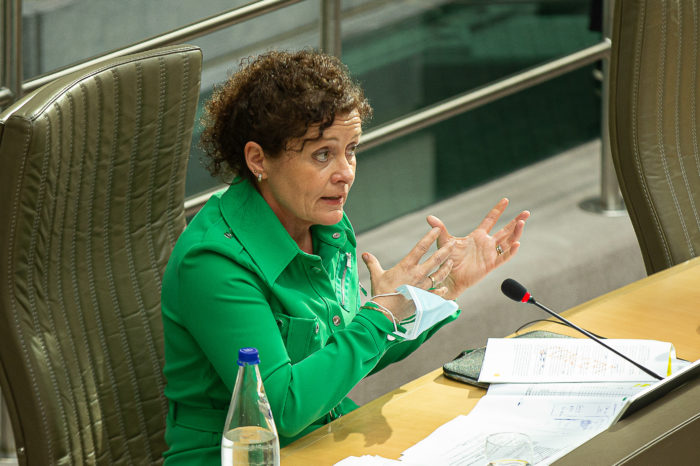 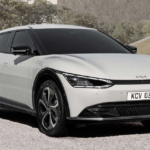