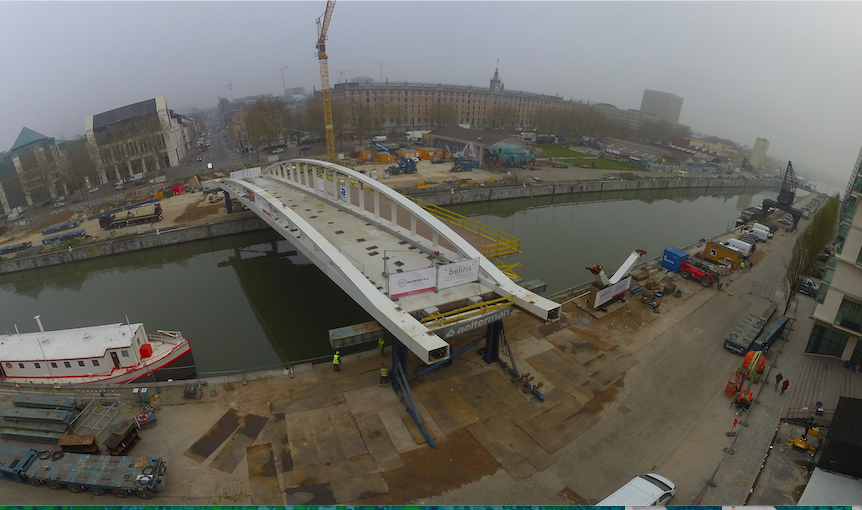 On Friday, a spectacular move took place on the Brussels canal between the Tour & Taxis site and the North Quarter. The central bridge deck of the Suzan Daniel bridge was moved across the canal by boat to connect the two banks of the Quai des Métiers and the Quai des Péniches.

The central bridge deck is 60 meters long, 13 meters wide, and weighing 1 200 tons. This section was installed over the canal with the help of transporters and barges and thanks to the contractor’s De Nul, Aelterman, and their subcontractor Sarens.

In the coming weeks, the central bridge deck will be placed on two pillars, and additional connecting pieces, such as the secondary decks, each 30 meters long, will then be built.

They will span the quay on either side of the canal to reach the Avenue du Port and the Quai de Willebroeck. The bridge will then be completed: asphalting, railings, lighting, etc.

Elements of the bridge had been assembled on the Quai des Matériaux over the past six months. Its steel arches were manufactured in the Aelterman workshop near Ghent and transported by barge, while the main girders and the bridge deck were reinforced and concreted.

The steel structure of the pedestrian section was built in the workshop near Kortrijk and then assembled to the structure. The work should be completed by the end of 2021. The total amount allocated to this project is 9,4 million euros.

The bridge’s arrival will create a shorter route for active road users between Simon Bolivarlaan and the intersection of Havenlaan and Picardstraat, thus creating a more logical route between the North Station and the areas around Tour & Taxis.

The bridge, which will eventually be 200 meters long, will have two traffic zones: a seven-meter-wide roadway for public transport and a six-meter-wide cycle and pedestrian zone. After a participatory process, the Suzan Daniel bridge was named after the LGBT activist Suzan Daniel. 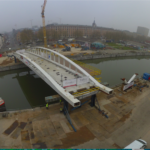