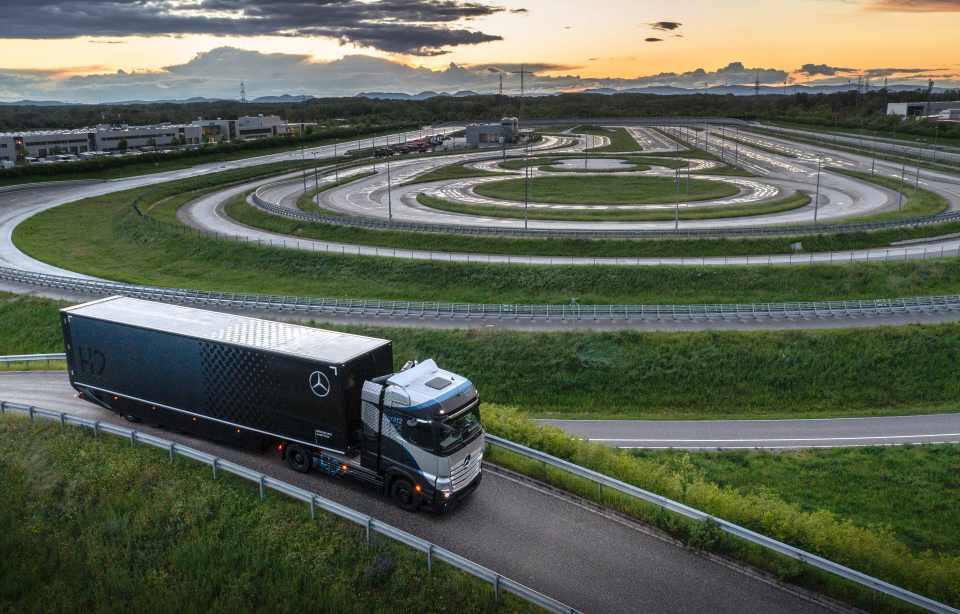 Currently the Mercedes-Benz GenH2 Truck is running rigorous test laps on the internal circuit, prepping for road test by the end of this year /Daimler Truck

Since April, Daimler Truck’s heavy-duty hydrogen truck, the Mercedes-Benz GenH2 presented as a prototype in September last year, is doing ‘rigorous’ test laps on the circuit, prepping for road tests by the end of this year.

Meantime, Daimler Truck joins forces with Dutch Shell for a ‘hydrogen-powered freight corridor’ with 150 fueling stations between Rotterdam, Cologne, and Hamburg and 5 000 Mercedes-Benz heavy-duty fuel cell trucks by 2030. On Thursday, the latter was announced on Daimler Truck’s inaugural ‘Strategy Day ‘ for investors, setting its ambitions as an independent company.

Both companies are among the founding members of the H2Accelerate (H2A) alliance. Truck manufacturers Daimler Truck, Volvo Group, and Iveco are teaming up in this H2A alliance with oil and gas companies Royal Dutch Shell and Austrian OMV to accelerate the rollout of hydrogen trucks in Europe. They want to put hundreds of fuel cell trucks on the road and set up 20 high-capacity fueling stations in the first phase by 2025.

Daimler Trucks aims with its GenH2 truck at a range of at least 1 000 km without refueling. Customer tests are expected to start at the beginning of 2023, with the first series-produced GenH2 Trucks delivered in 2027. According to the press release, the current prototype is loaded during the tests with a payload of up to 25 tons for a gross vehicle weight of about 40 tons, as the final specs foresee.

The fuel-cell truck has to meet the same durability requirements as a comparable conventional Mercedes-Benz Actros. This means 1,2 million kilometers on the road over a period of ten years and a total of 25 000 hours of operation.

Mercedes launched its heavy-duty truck Actros back in 1996, which, after three generations, was completely redesigned from the ground up in 2011 to start a new generation. The hydrogen-powered Mercedes-Benz GenH2, which again is designed starting from white paper, has two 40 kg tanks with minus 253° C cooled liquid hydrogen and two fuel cells.

Daimler Truck believes in liquid hydrogen rather than its gaseous form, which requires compression (usually 350 bar for trucks) but needs far larger storage tanks. Smaller and lighter hydrogen tanks give the truck more cargo space and a higher payload, says the manufacturer.

“At the same time, more hydrogen can be carried, which significantly increases the trucks’ range. This makes the series GenH2 Truck, like conventional diesel trucks, suitable for multi-day, difficult-to-plan long-haul transport and where the daily energy throughput is high.”

But for the time being, until the liquid hydrogen tanks system has matured in development, Daimler Trucks is using a gaseous system for rigorous internal testing. It demonstrates that both variants – gaseous and liquid – can be technically implemented, the truckmaker says.

And the ‘industry’, is, in this case, also competitor and partner at the same time, Volvo Group with the Volvo and Renault branded trucks. A month ago in April, Daimler Truck AG and Volvo Group outlined their plans for their Cellcentric joint venture, envisioning starting mass production of fuel cells for trucks as soon as 2025.

Both truck builders now hedge their bets on both hydrogen and battery-electric to “offer customers the best genuinely locally CO2-neutral vehicle options, depending on the application.” Battery-electric trucks like both are offering already in different sizes, won’t do the trick alone.

Daimler Truck presented in September 2020 its battery-electric version, the eActros LongHaul, which will have a range of about 500 kilometers and should hit the roads in 2024. It intensified its partnership with Chinese battery manufacturer CATL to deliver the lithium-ion battery packs for its Mercedes and Freightliner trucks beyond 2030.

“Battery power will be rather used for lower cargo weights and shorter distances, while fuel-cell power will tend to be the preferred option for heavier loads and long distances,” Daimler Truck’s CEO believes.

From this year, Daimler Truck will launch a series of smaller battery-electric trucks. Volvo Truck just opened this year, the ordering of a complete line-up of electric trucks, up to 44 tons, and depending on the battery pack with a range up to 300 km 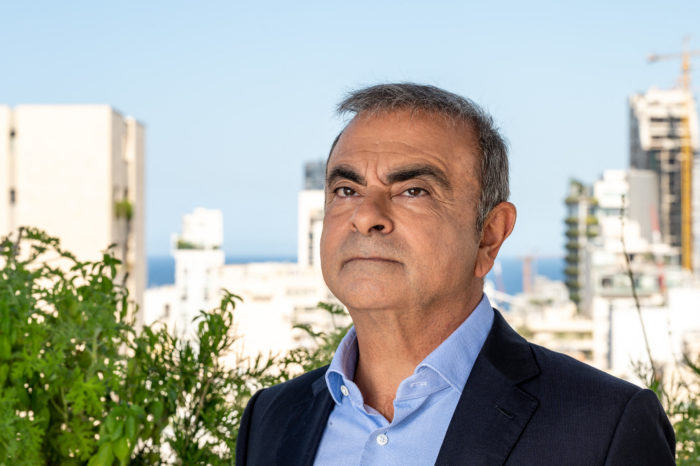 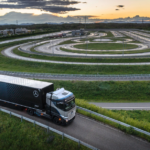