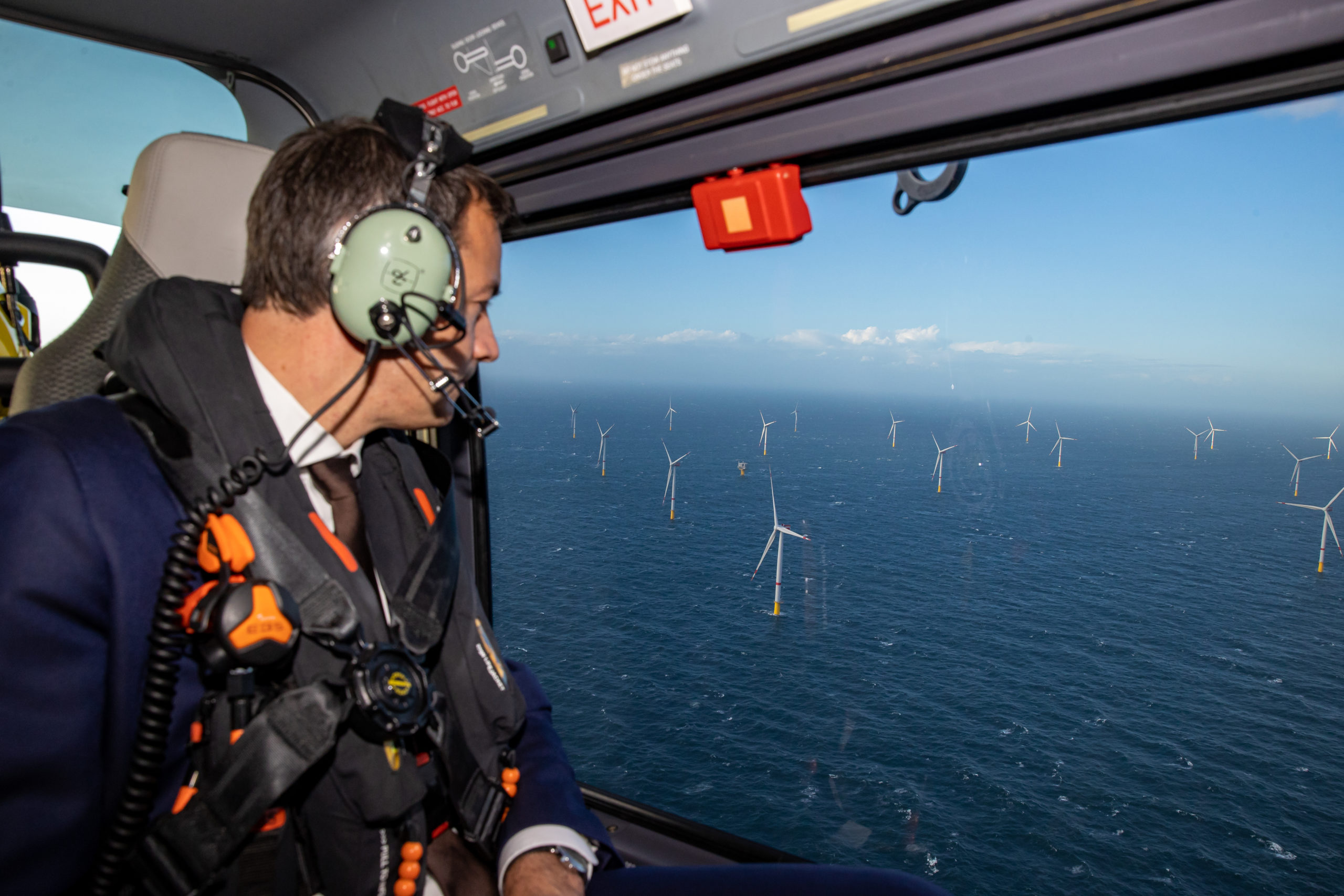 Together with Denmark, Germany, and The Netherlands, Belgium will increase the capacity of wind turbines in the North Sea tenfold by 2050, to a total capacity of 150 gigawatts. Prime Minister Alexander De Croo (Open VLD) signed an agreement on this on Wednesday in Esbjerg, Denmark.

The sky-high energy prices and the ongoing military conflict in Ukraine are forcing European countries to replace fossil fuels with renewable energy more quickly. So the fact that the four North Sea countries are combining their efforts is, of course, welcomed by the European Union.

To make Europe climate neutral by 2050, 300 GW of offshore wind energy is needed in the North Sea. The project that has now been launched already accounts for half of that. President Ursula von der Leyen had traveled to Esbjerg, especially for the ‘North Sea Summit’.

The largest green power plant in the EU

The ambitions of the ‘Esbjerg Declaration’, also signed by Danish Prime Minister Mette Frederiksen, Dutch Prime Minister Mark Rutte, and the German Chancellor Olaf Scholz, are considerable. The aim is to increase the total capacity of the four countries’ offshore wind farms to 65 GW by 2030. This is equivalent to a fourfold increase.

By 2050, the aim is to double that capacity again to 150 GW, or ten times the current capacity. That corresponds to the electricity consumption of 150 million families.

In addition to electricity, the turbines must also generate green hydrogen. The target for this is 20 GW by 2030.

The aim is to connect the various wind farms as far as possible into one extensive network. A planned power cable between Belgium and Denmark – Belgium’s Minister of Energy Tinne Van der Straeten (Groen) has been a driving force here – is considered an essential backbone for this large green power plant in the North Sea.

Electricity to the whole of Belgium

Currently, the total capacity of Belgium’s eight offshore wind farms is 2,2 GW, the equivalent of the country’s two largest nuclear reactors (Doel 3 and Tihange). It accounts for 10% of Belgium’s total domestic energy needs.

The Belgian government wants to increase the current capacity of wind turbines at sea to 6 GW by 2030 and 8 GW by 2040, enough to provide every Belgian household with power from the North Sea. By comparison, the Netherlands wants to have 21 GW of offshore wind turbines ready by 2030; Germany aims for 30 GW by 2030 and 70 GW by 2045.

In Belgium, the 67-kilometer-long coast is, of course, limited when you want to build many wind farms. Belgium is therefore firmly committed to the planned interconnection with other countries, not only with Denmark but also via existing interconnections with The Netherlands, Great Britain, and Germany. In time, Belgium will also look further afield – to Norway, for example – to introduce green power.

As De Morgen writes, a significant problem is that it is not windy all the time. In addition to wind turbines and cables, two ‘energy islands’ are therefore on the drawing board. One just off the Belgian coast and one off the Danish west coast. These islands can temporarily store the power generated and then transport it to the mainland at the right time.

At the heart of the project for Belgium are the future Princess Elisabeth zone and its artificial island. Expected by the government to be completed by 2028, this new zone should add 3,5 GW to Belgium’s offshore capacity, which would triple to 6 GW by 2030, and 8 GW by 2040, through the repowering of existing wind farms.

The other notable feature of the area is that hybrid interconnectors will connect it to a 10 GW Danish artificial island and the UK via the new Nautilus cable. Like the other major offshore projects, the Belgian-Danish connection, called Triton Link, will be orchestrated by Elia, the electricity transmission system operator, and should be operational by 2030.

All the power that the North Sea countries want to generate at sea must, of course, be fed into the electricity grid. To this end, the Belgian high-voltage manager Elia is planning a new high-voltage line in West Flanders, the Ventilus.

But there is a lot of protest against this project. Campaign groups want the high-voltage line to go underground, but experts point out that this is technically difficult to achieve. So it is up to the Flemish government to decide overground or underground.

Prime Minister Alexander De Croo assumes that the Flemish government will find a solution for the high-voltage line. “It is not an easy decision, but there is no other choice. Everyone agrees that we must emit fewer greenhouse gases, that we must become energy independent, and that we must support our industry. In that case, the electricity has to come ashore”, says De Croo.

De Croo is, however, “reasonably reassured” that the Flemish government will find a solution.

Belgium has played a prominent role in the agreement, and it intends to benefit from a real comparative advantage. “Our companies are leaders in offshore wind energy and contribute to the construction of large wind farms in Scotland, France, and the United States,” minster Tinne Van der Straeten says. “They are praised for their technical expertise, know-how, and capacity for innovation.”

This is why the Belgian delegation in Esbjerg also included a strong representation of companies, including Deme (dredging), the port of Antwerp, the gas and electricity network managers Fluxys and Elia, as well as the shipping companies CMB and Euronav, and the John Cockerill group, which has made green hydrogen an essential vector for its growth.

According to Belgian estimates, wind energy, which currently accounts for 14 000 jobs, could account for almost twice that number by 2030.