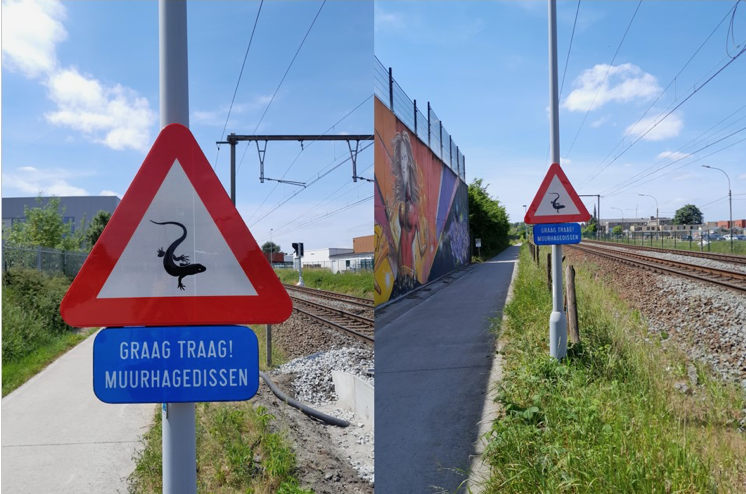 A fast-growing population of wall lizards in the railway bed has urged the city of Wetteren to put up warning signs on the nearby cycling path. /Benedicte Vispoel

Road signs warning for crossing toads, ducklings, or deer are a familiar sight on Belgian roads. But in Wetteren, commuters on the cycle highway alongside the railway are now warned of a new species: wall lizards. Their growing population led to a casualty rate demanding precautionary measures.

The population of wall lizards living asides from the railroad from Wetteren to Kwatrecht is relatively young, but it is proliferating. Consequently, a critical number of them are being run over by cyclists on their way to one of the train stations. The small animals love to dwell on the warm stones of the railway bed but tend to roam around.

Monitoring the fatality rates, nature conservation organization Natuurpunt counted a toll of 103 dead wall lizards in 2020 and 31 in 2021. The city of Wetteren decided to act on these numbers, regarding them as ‘fairly high’, even if it remains unknown how these rates influence the lizard population.

After requesting a study by Natuurpunt, the city of Wetteren has chosen to put up road signs reading ‘Please slow down! Wall lizards’. Raising awareness was deemed the optimum solution to speed-blocking measures or infrastructural changes.

The signs must urge cyclists to reduce speed and cautiously pass the sector. However, with the placement of wooden stakes and more rocks on site, Natuurpunt hopes to minimize the little animal’s urge to roam around. The project remains under watch for a more extended period.

The wall lizard is a heat-loving species found mainly in rocky areas. It is one of the three native lizard species in Belgium, alongside the viviparous lizard and the sand lizard. The species occurs in Belgium and the Netherlands at the northern limit of its distribution range.