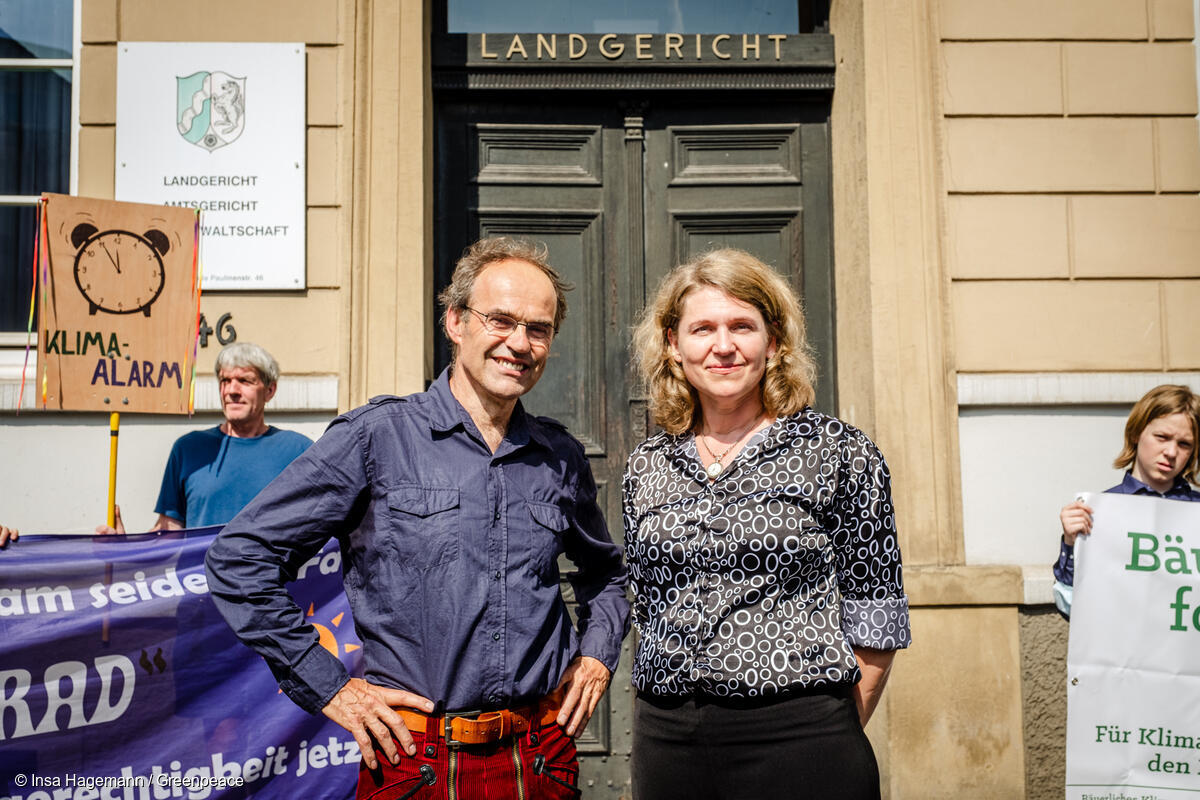 In a historical court case, farmer Ulf Allhoff-Cramer and lawyer Roda Verheyen are suing Volkswagen over its responsibility for climate change. The car company responds that its current tactics are compliant with the law. /Greenpeace

The district court of Detmold started a historic court trial against Volkswagen on Friday. The accusor is Ulf Allhoff-Cramer, a German organic farmer who claims that the German car giant is responsible for the demise of his farm, with his crops and animals suffering from global warming. Greenpeace supports the court case.

Allhoff-Cramer is a 61-year old East-Westphalian farmer who is witnessing his farm withering. Because of increasing adverse weather conditions, crop failures are rising, his forest is fading, and he needs to buy supplementary fodder for his animals, who used to feed solely on the meadows, which don’t provide enough grass anymore.

According to the farmer, car manufacturers have a significant hand in this growing threat, in the past and in the present, because of their CO2 emissions. Allhoff-Cramer accuses them of destroying his livelihood and has decided to take Volkswagen, the world’s second-biggest carmaker, to court. The case is historical and carries a lot of symbolic weight, since it is the first time a carmaker is being sued over climate change. It has already inspired and triggered more cases.

Allhoff-Cramer demands that Volkswagen immediately shrinks its share of combustion-engined cars to 25% and that it stops selling ICE cars entirely as of 2030. Volkswagen is one of the few car companies that has signed the declaration on accelerating the transition to 100% zero-emission cars and vans at COP26 in Glasgow last year, meaning that sales of vehicles should be emission-free by 2040 globally and as from 2035 in key markets.

The struggling farmer and Greenpeace are being represented by Roda Verheyen, one of Germany’s most renowned lawyers in matters of climate lawsuits. She puts forward the case with the argument that Allhoff-Cramer has a fundamental right to health and that Volkswagen is violating his freedom by excessively emitting greenhouse gases.

According to Greenpeace, the German industrial group emits as much greenhouse gases as Australia (582 million tons). However, a large amount of those emissions are produced by the owners’ vehicles so it remains to be seen if the manufacturer can be held responsible.

Volkswagen responds that it is being wrongly accused, pointing to the fact that combustion engines are legally allowed in Europe until 2035 and that its current strategy complies with the law. On Friday, Volkswagen stated that “it is the task of the democratically elected legislature to shape climate protection with its far-reaching effects.” In other words, politicians are the main actors to fight climate change.

The court will announce a decision on September the 9th, 2022. Volkswagen is also facing court summons in Braunschweig, also by Greenpeace, while the German Environmental Aid is suing BMW and Mercedes.