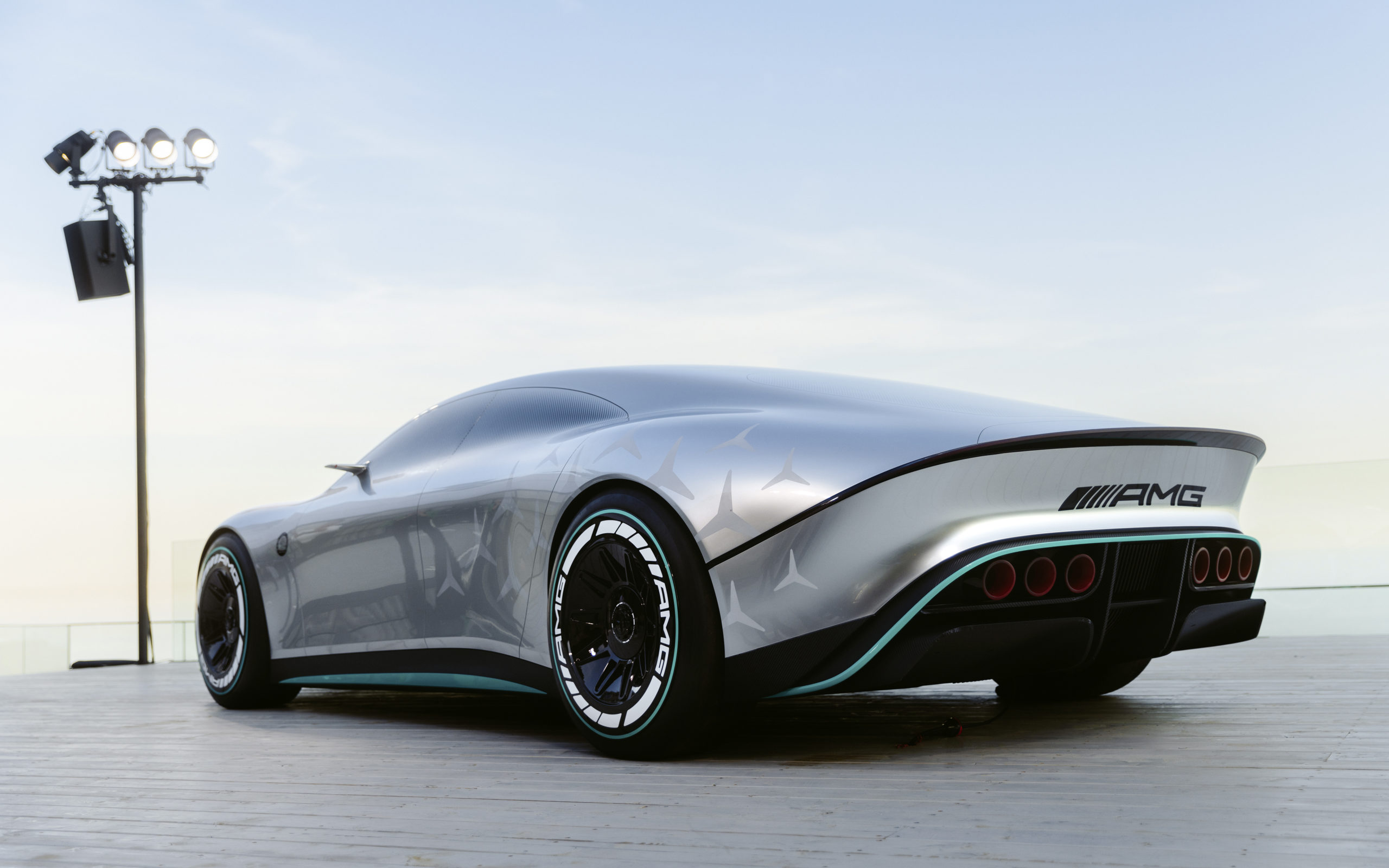 The AMG Vision is very much a design study hinting at more propriety models for the performance branch in the wake of electrification. /Mercedes

Mercedes has unveiled a design study guiding the electrification strategy for its performance brand AMG. CEO of Mercedes-Benz Ola Källenius also announced that the brand would move away from lower-margin models and reap more profitability from luxury models.

With sleek lines and a long profile, the Vision AMG takes several cues from the Mercedes EQXX, an all-electric experimental sedan capable of covering more than 1 000 kilometers on a single charge. The sophisticated aerodynamics must help the sports car cut through the wind as fast as possible for the lowest consumption possible but is also very reminiscent of long-tail racers like the Porsche 917 Langheck or, more recently, the McLaren Speedtail.

Mercedes doesn’t release any technical details on electric motors or battery packs – if there are any yet. Instead, this concept serves as a styling exercise whilst simultaneously conveying the message that the mission for AMG will shift more to the adoption of propriety models instead of tuning and adapting existing Mercedes models. With its four doors and sedan shape, this Vision AMG might be the future successor to the GT 4-Door and materialize into a competitor for the Porsche Taycan.

Mercedes does unveil that the car sits on the AMG.EA underpinnings, an all-new architecture for electric performance cars. Interestingly, the lights on the back of the car are shaped like exhaust pipes.

From seven to four

At the same time, Mercedes CEO Ola Källenius has unveiled plans for his company to focus more strongly on luxury and higher-margin models during a meeting with possible investors last week under the name ‘Economics of desire’. The new strategy will affect the lower classes in the range, notably A- and B-Class, where the line-up will be thinned out from seven to four models.

However, he refrained from commenting if this would ultimately mean that those series would reach a dead end but divided the brand into ‘Top End’ (S-Class, G-Class, EQS and AMG), ‘Core Luxury’ (E- and C-Class) and ‘Entry Level’ (A- and B-Class).

No competition to mass producers

Currently, Mercedes is already forced to pursue this business conduct. With supply shortage and the semiconductor crisis ruling over production output, the German carmaker prioritised the models with the highest margins. The decision is paying off. Whilst sales slid by 10% during Q1 of 2022, profit has risen by 20%

Källenius presented targets that by 2026 60% of the company’s revenue must be generated by sales of top-end vehicles. Moreover, whereas the average retail price in Germany now is 28 000 euros, it must rise to 33 000 euros. “It is not the goal to be a competitor to mass producers,” he added, “That is not what the Mercedes-Benz brand means.”

The precept ‘fewer cars, higher margins’ is pursued by more carmakers, like Renault and its Renaulution plan, to respond in flexibility to the new market conditions.

Mercedes’ more pronounced luxury switch is reinforced by the inauguration of a new branch, called Mythos, which sits above Maybach and braces for customers with the deepest pockets who can order tailor-made, low-volume or one-off cars. Mercedes showed a teaser image of an SL Speedster to introduce Mythos.

Ofcourse, there’s little doubt that the luxury strategy for Mercedes is a suited one. On Friday, an ultra-rare 300 SLR Uhlenhaut Coupe, one in two, was sold for 135 million euros at the Mercedes museum, making it the most expensive car ever sold. The proceeds from the auction will fund a global scholarship program.