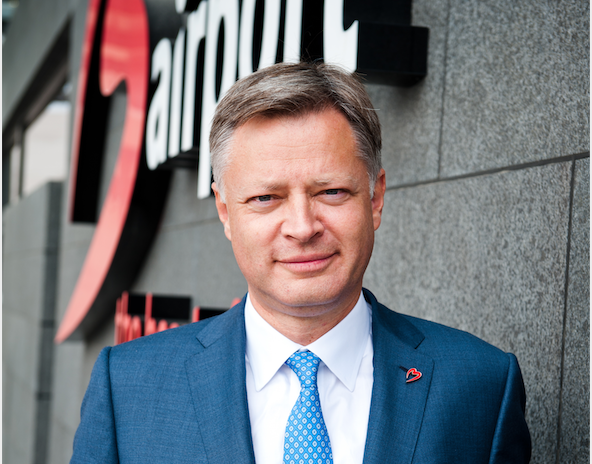 In an objective to renew the airport of Zaventem into a multimodal hub based on a more environmental-friendly strategy, her CEO Arnaud Feist wants to exchange short-haul flights with high-speed train connections. While pointing at how Brussels Airport was one of the first in Europe with an integrated train station, he also puts the ball in the hands of the authorized politicians.

Because of the pandemic, the Belgian national airport went through some bumpy years. Peaking at 26,4 million in 2019, the number of passengers dropped in the subsequent years to 6,7 million in 2020, with a mild increase to 9,4 million in 2021. Cargo took a high flight, but those sunny figures couldn’t compensate for the dive in passenger transport.

These plummeting figures are also reflected on the balance sheets, with turnover and profitability tipping to losses of € 111 million in 2020 and € 49 million in 2021.

A new road map leading to 2027 wants to redeem the better times. It pivots around a sustainable and more efficient airport that will harvest income from novelty, still durable activities dealing with green kerosine, new landing procedures, and a hotel.

The most critical ax of the new strategy is the target of minimizing short-haul flights and replacing them with high-speed train connections. The airport, equipped for the arrival and departure of those trains, has been there. From 2013 to 2015, the Thalys between Brussels and Paris also reached passengers landing or departing in Zaventem, but the subsidizing airport laid off the project after profitability issues.

CEO of the airport Arnaud Feist revealed to Walloon newspaper La Libre Belgique: “I told the minister in charge of the file at the time that it was up to him to take over. We’ve been putting this file on the table for years, but there’s nothing concrete happening.” Feist also says that he is contacting train operators NMBS/SNCB and the Federal Agency for Mobility and Transport to materialize the project.

Scrapping the short-haul connections would mean no more flights from Brussels to Paris, Amsterdam, or Frankfurt, but Feist adds that it is what the airport wants if there is an alternative by rail. Furthermore, the detour from Brussels to Amsterdam isn’t that far, about ten minutes, and according to Feist, this shouldn’t be just about profitability but also about environmental impact.

The train is, of course, a more durable means of transport than kerosine consuming short-haul plains. The airport CEO hopes that the Federal Government will now take its role.

Meanwhile, Thalys is going through a transitional phase as well to recuperate from low passenger traffic caused by the pandemic. The merger with Eurostar is almost completed, while the company announced the cancellation of its budget branch, IZY. In 1958, the airport of Zaventem was the first in Europe with an integrated train station.