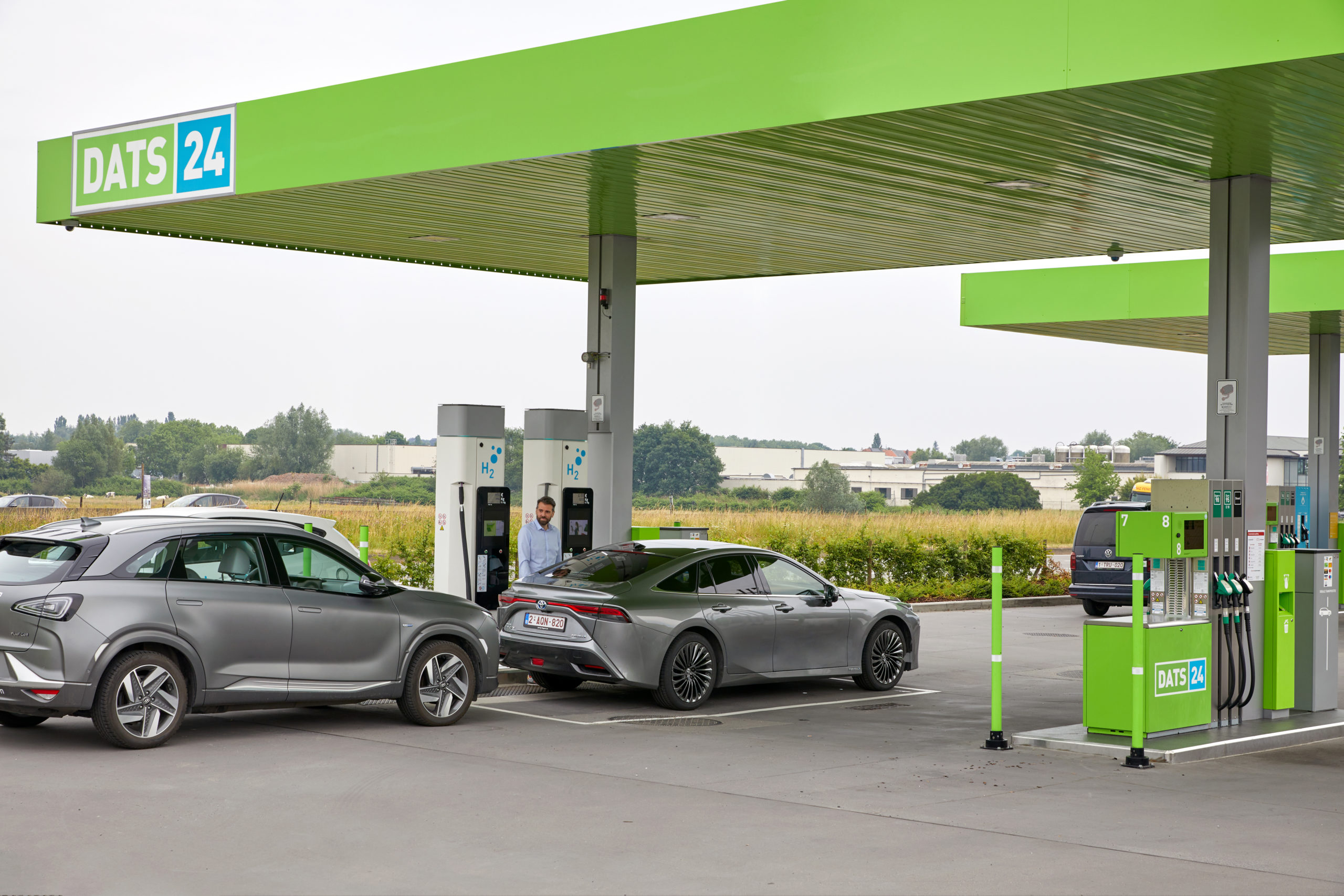 With the opening of a second filling station for hydrogen by DATS24 Belgium now has four sites available for FCEVs. To secure nationwide coverage a total of 25 is needed. /DATS24

As part of a complete network of five hydrogen filling stations, DATS24 opened a second unit in Wilrijk yesterday. The forecourt lies along the busy lanes of the A12 and not far from the city of Antwerp, where garbage trucks drive on the emission-free fuel carrier.

The plan for DATS24 to roll out several hydrogen stations was already presented in 2018 when the fuel provider opened its first hydrogen station at the headquarters of parent Colruyt, which was also the first integrated fueling station in Europe. At the DATS24 stations, drivers of fuel cell cars (or FCEVs) line up at a regular pump where they can find the appropriate filling pistol next to those for petrol or diesel.

Belgium now counts four hydrogen stations. CMB runs one in Antwerp, DATS24 has two, and there’s one in Zaventem from Liquid Air. However, what sets the stations from DATS24 apart is offering hydrogen produced from renewables, better known as green hydrogen. The grey variant, extracted from natural gas and available in Zaventem, doesn’t result in significant greenhouse gas advantages because of CO2 emitted during production.

DATS24 is partnering with Hyundai, Toyota, WaterstofNet and ALD Automotive for the project. Construction of the station took a cost of 2 million euros, but it is part of a much larger investment plan by Colruyt into hydrogen, while Europe provides funding as well. With Fluxys, the supermarket group is constructing a hydrogen plant in Zeebrugge, and with VoltH2, another one is planned in Terneuzen, The Netherlands. For nationwide coverage, 25 stations are needed in Belgium.

DATS24 regards the roll-out of a hydrogen station network as an investment for 2030. With currently only two brands offering car models (Toyota Mirai and Hyundai Nexo), the choice remains very limited, making a rush on the stations far from near. The cars are also expensive, especially for private customers.

The Hyundai Nexo costs € 73 999 while the Toyota Mirai starts at € 64.470. Therefore, the uptake of hydrogen for passenger cars will be initiated by corporate leasing, where these cars are offered from 800 euros per month. Ann Larosse, CSR and Innovation Manager at ALD Automotive: “New technologies need time to find their way to the public. We are proud to collaborate with DATS24, Hyundai, and Toyota in this ‘early adopters’ story. By expanding the offer, we hope to stimulate demand.”

Larosse is convinced there’s a place to take also in the professional fleet sector: “At ALD Automotive, we believe in the role hydrogen can play in greening our mobility. We want to offer complimentary forms of energy apart from pure electric drives. We aim to create an ecosystem where the offer, infrastructure, and price are in line.”

Passenger cars or not?

Nevertheless, using hydrogen as a fuel carrier for personal transport is under much debate. Because of limited quantities available, even after future scaling up of the technology, it is often claimed that it should be reserved for heavy transport, industry, and domestic heating, leaving battery-powered technology for cars. The struggle for hydrogen-powered cars was illustrated recently when Hyundai froze the activities of its R&D department working on their next-gen fuel cell.

The distinct advantages of fuel cell cars are long ranges, some 600 kilometers or more, and quick filling times, balancing around 5 minutes. However, modern development in battery technology for BEVs is closing in on these benefits. There is, of course, also the solution to use hydrogen as a range extender in passenger cars; look at what Renault is doing with its Scénic Vision concept.

But Colruyt isn’t betting on one horse. With Karel Cardoen, the businessman who previously owned the car supermarket still carrying his name, the company is investing 4 million euros of new capital in charging station company Pluginvest from Antwerp.

Pluginvest primarily offers charging as a service (CaaS) in the business sector, though it also provides solutions for privateers. With working places becoming one of the primary places to charge plug-in hybrids and EVs, many companies are in dire need of infrastructure, including maintenance and administrative handling of bills. Pluginvest takes that care out of their hands.

This year, Colruyt opened the largest charging park in Belgium at its headquarters in Halle, where 109 electrified cars can refill simultaneously.