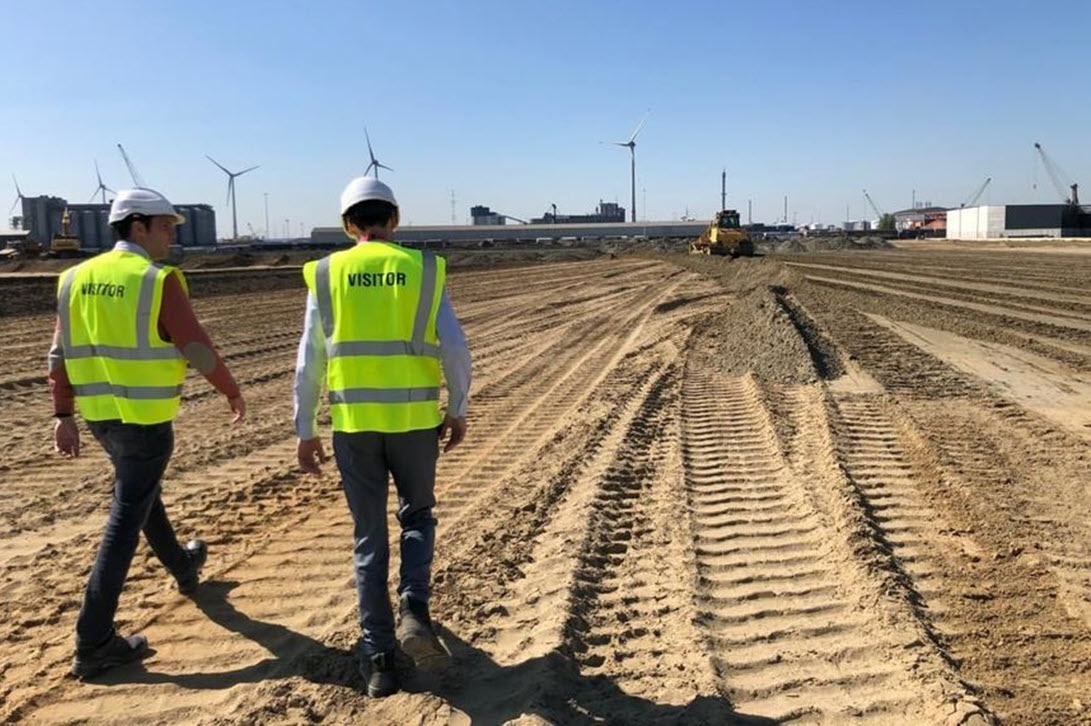 The American company Plug Power is building its first project in Europe at the Port of Antwerp-Bruges. The company plans to invest around €300 million in the facility, which it expects to come fully online in 2025 /site Plug Power

The Albany, New York-based company Plug Power will build a factory in the port of Antwerp on the former Opel site, NextGen District, to produce green hydrogen, zero-carbon fuel created using renewable energy and electrolysis. The investment will amount to almost 300 million euros.

The Port of Antwerp wants to convert the gigantic 11-hectare site into a hub for green and renewable activities. The American group’s new plant will build will be one of 100 megawatts. According to CEO Andy Marsh, this will put the factory in the top three of the largest green hydrogen plants in Europe.

The company, which has signed a 30-year concession agreement, will produce 12 000 tons of green hydrogen yearly. It will supply the many chemical companies in the port with a green alternative for the ‘grey hydrogen’ that today is mainly used, generated from natural gas.

But the green fuel will also be available for ships and road transport. Plug Power counts on a mix of self-produced and purchased green energy to produce hydrogen.

The green hub of Europe

The plant should produce its first green hydrogen through electrolysis with sustainable energy as early as the end of 2024. For comparison, a company like Ineos alone needs 100 000 tons of hydrogen a year for its cracker in Antwerp.

But according to Jacques Vandermeiren, CEO of the Port of Antwerp-Bruges, the American investment is the first “building block” to transform the port into the green hub of Europe. Plug Power itself has plans to triple the capacity of the planned green hydrogen plant within ten years.

According to the newspaper De Tijd, in addition to a deal with Amazon, Plug Power today also has contracts with Walmart, Nike, and others to run their logistics vehicles on hydrogen. Last year, the company also entered a joint venture with car manufacturer Renault to develop fuel cell systems. The idea is that these will run on green hydrogen produced in Antwerp.

Until now, Plug Power, which initially started as a producer of fuel cells,  has struggled to turn a profit. It is betting that the growing appetite for hydrogen made using wind and solar power will change that.

In March of this year, it started serial production of fuel cells in its factory in Flins, Yvelines in France, as part of the Hyvia joint venture with Renault. The Flins factory near Paris will produce some 1 000 fuel cell systems annually.

With the 50/50 joint venture, Renault and Plug Power want to capture a 30% share of the EU market of hydrogen-driven light commercial vehicles (LCVs). In addition, Renault intends to offer a line of hydrogen-fueled utility vehicles from the Summer of 2022.

Four companies have signed a concession agreement for the Nextgen District in Antwerp, where Plug Power will build its plant.

Belgian TripleHelix will build there within the SurePure-project, the first factory in the world to reduce polyurethane back to a pure raw material for chemistry. Polyurethane is a chemical that makes, for example, mattresses and car seats.

American Bolder Industries will extract chemicals from discarded car tires. These substances will be used to make an oil product that can be used in rubber, plastic, and petrochemical products.

The water recycling company Ekopak from Tielt will build a factory there that will recycle wastewater for industrial reuse, an investment of 108 million euros.

And there are more recycling companies on the way, writes Gazet van Antwerpen. The Port of Antwerp is in very advanced negotiations with Lappet Industries, a Flemish company that extracts steel and oil from worn car tires. This can be recycled into steel wire and plastics.

The port is also negotiating with Biondoil, a company that wants to convert wood chips into ethanol for chemical companies, and with Novali, which wants to make the next generation of lithium batteries.

Flemish minister-president Jan Jambon (N-VA) calls the investment of Plug Power a “game-changer” to “develop Flanders into the hydrogen hub of Europe.” Minister Jambon is on an economic mission in New York and the US as part of a Belgian trade mission with Princess Astrid, where also the concession agreement between Plug Power and the new fusion port was signed.

Because hydrogen is an essential element in the energy transition, Belgium’s Energy Minister Tinne Van der Straeten (Groen) wants Europe to step up the certification of green hydrogen.

Green hydrogen is physically identical to other forms of hydrogen. Full certification is needed to ensure that the hydrogen supplied is green and thus wholly climate-neutral. This means full traceability from the origin of renewable electricity to the delivery of hydrogen.

“The faster Europe can certify green hydrogen, the faster we can kick-start the breakthrough of the molecule, and the more Belgium can play its trump cars as a European energy hub,” the minister said to the Belga news agency.

According to the minister, Belgium has many strengths to lead the way in the large-scale breakthrough of renewable green hydrogen production and use thanks to its central location within Europe and the highly developed transport infrastructure.

According to estimates, hydrogen will represent one-third of the fuel used for land transport and 60% for maritime transport by 2050. Each kilogram of green hydrogen that replaces a fossil fuel will prevent 9 kg of CO2 from being emitted into the atmosphere.