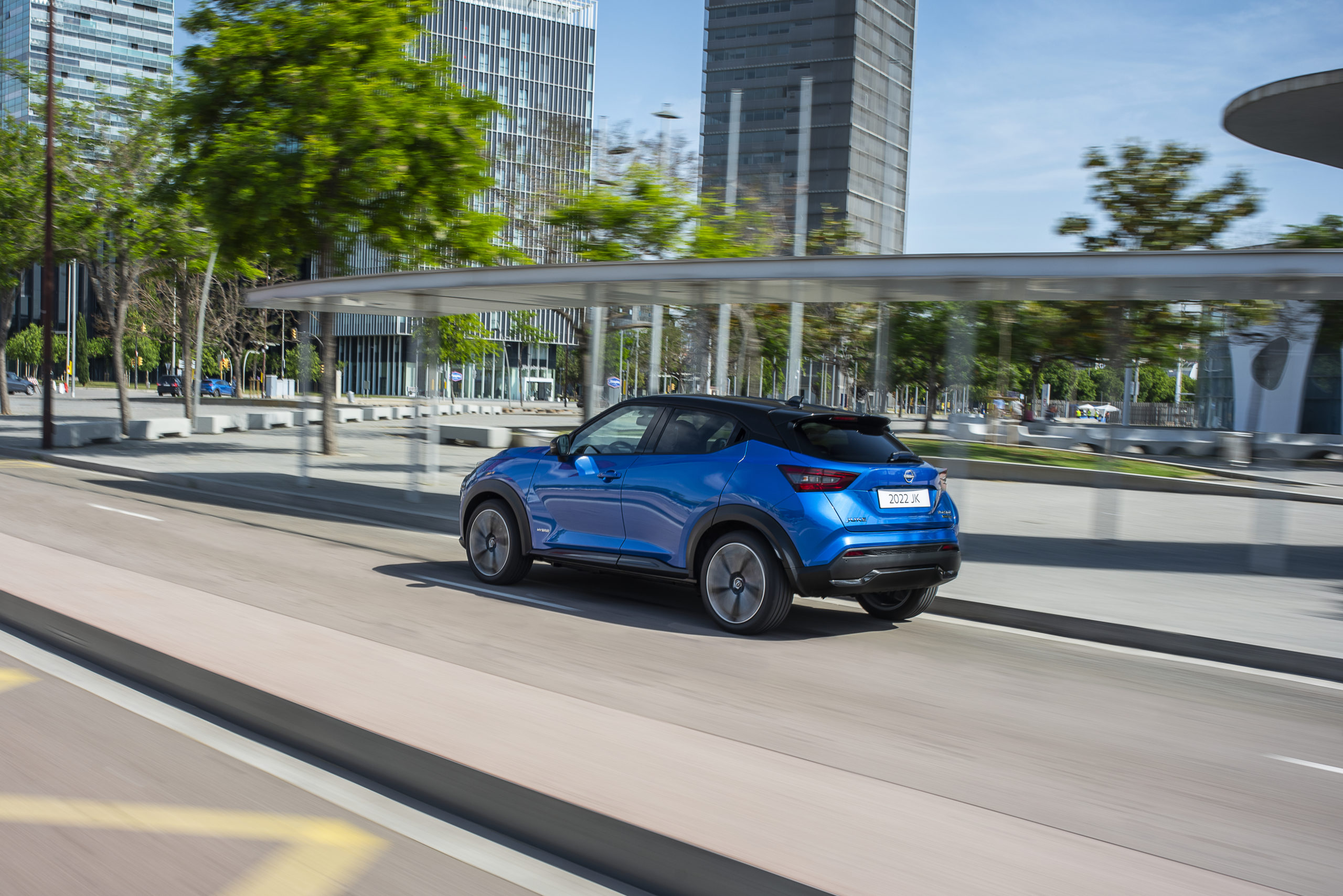 Nissan decided to skip the plug-in phase for its electrified models. Hybrids, like this Juke, are poised to bridge the transition to full electric models for those customers who need more time to adjust.

Thanks to the collaboration with alliance partner Renault, the hybrid system is a technological maverick. Now, originals aren’t always the easiest to deal with, so how about this one?

The Juke Hybrid in the accompanying photos is identical to the Renault Captur E-Tech Hybrid, only set up accordingly. The marriage of a 1,6-liter gasoline engine (92 hp) and a 1.2 kWh battery pack with a 48 hp electric motor must quench the thirst by 20% and improve power by a quarter. This translates into a total output of 140 hp and an official consumption of 5,2 liters per 100 kilometers (CO2 emissions: 118 g/km).

Nissan and Renault have developed a propriety hybrid system, with the Japanese supplying the e-motor and the combustion engine (using the Atkinson cycle). At the same time, the French took care of the starter-generator and the gearbox.

Especially the latter is a peculiar device since the first and reverse gear is electric, and the combustion engine commands the four other ones. According to Nissan, this makes up for losses caused by e-CVTs. A combustion engine running efficiently at higher and cruising speeds returns better consumption mated to a conventional gearbox.

Consequently, the start-up is always fully electric, and the operating mode is mostly a parallel hybrid. But in extreme situations, the hybrid combo can even act serially.

Regional Product Manager Jerome Grigny explains: “Say you drive two, three kilometers uphill and arrive at your stop with a depleted battery. With the first gear being electric, the ICE engine will charge the battery pack first for the car to start moving. Like a serial hybrid. Though these situations occur very rarely, it is unique that serial and parallel are both supported.”

Bear in mind that the battery will never be fully emptied but retains a safety margin of 32% for longevity and warranty reasons (8 years).

E-pedal instead of B-mode

For the Hybrid version, Nissan has optimized the aerodynamics of the bodywork of the Juke and added the smooth 19-inch wheels from the all-electric Ariya to minimize the impact on consumption. You can recognize the electrified version in front by its black strip between the headlights, sitting above a grille that deceptively looks closed but isn’t because the holes face downward.

To monitor the reduction of consumption and keep an eye on what’s going on between the different powertrains, the driver can read out a dedicated menu on the screen between the gauges. There’s also an additional battery reserve meter, a button for pure EV driving, and one for e-pedal driving.

Mind that alliance partner Renault chose a braking function instead of the e-pedal. Still, both do the same thing to the same extent: recuperate kinetic energy from braking to recharge the battery.

On the road, the electric assistance and the benefits on consumption should show the biggest difference with the non-hybrid Juke. As with the Renault Captur, the system succeeds in switching seamlessly between the electric and the gasoline driveline.

The Juke accelerates relaxed and comfortably to the desired speed, only disturbing the peace on board if you push the accelerator too deep and the crankshaft starts working over hours. An urge that does pop up from time to time because an acceleration from 0-100 km/h in 10,2 seconds is okay. But nothing fancy.

Because of the all-electric first gear, the compact SUV can drive fully electric up to 55 km/h. Though such driving behavior drains the little battery rapidly, recharging happens swiftly. The set-up of the e-pedal mode is spot-on, providing the right dose of deceleration before negotiating a turn. And during pleasantly long driving phases at higher speeds, the electric driveline doesn’t hesitate to take over. Downshifts also set an example because of the rev-matching.

Of course, a hybrid like this won’t excel on highways. But some rural passages combined with slower zones through community centers and swoopy linking roads resulted in an average of 5,3 liters/100 km, which is all we could have hoped for.

The ride itself is sturdy, mainly because the 19-inch wheels on our test cars didn’t fail to leave their presence unnoticed. But those favoring electric assistance because of the extra oomph in the driving experience will appreciate how that sums up with the consistent steering and the tight body reactions in corners. Despite its extra weight, the battery hasn’t affected the dynamics. But it did leave a trace in the boot (minus 68 liters).

However, with compromised cargo space and a higher price of around 3 700 euros as the few drawbacks, there’s no denying that the Hybrid version is a ripened and frugal addition to the line-up.

The Achilles heel must be its French counterpart, the Renault Captur wooing customers with a taste for a less daring design. But one brand without the other wouldn’t have been able to meet the high standards set by this elaborated combo driveline.