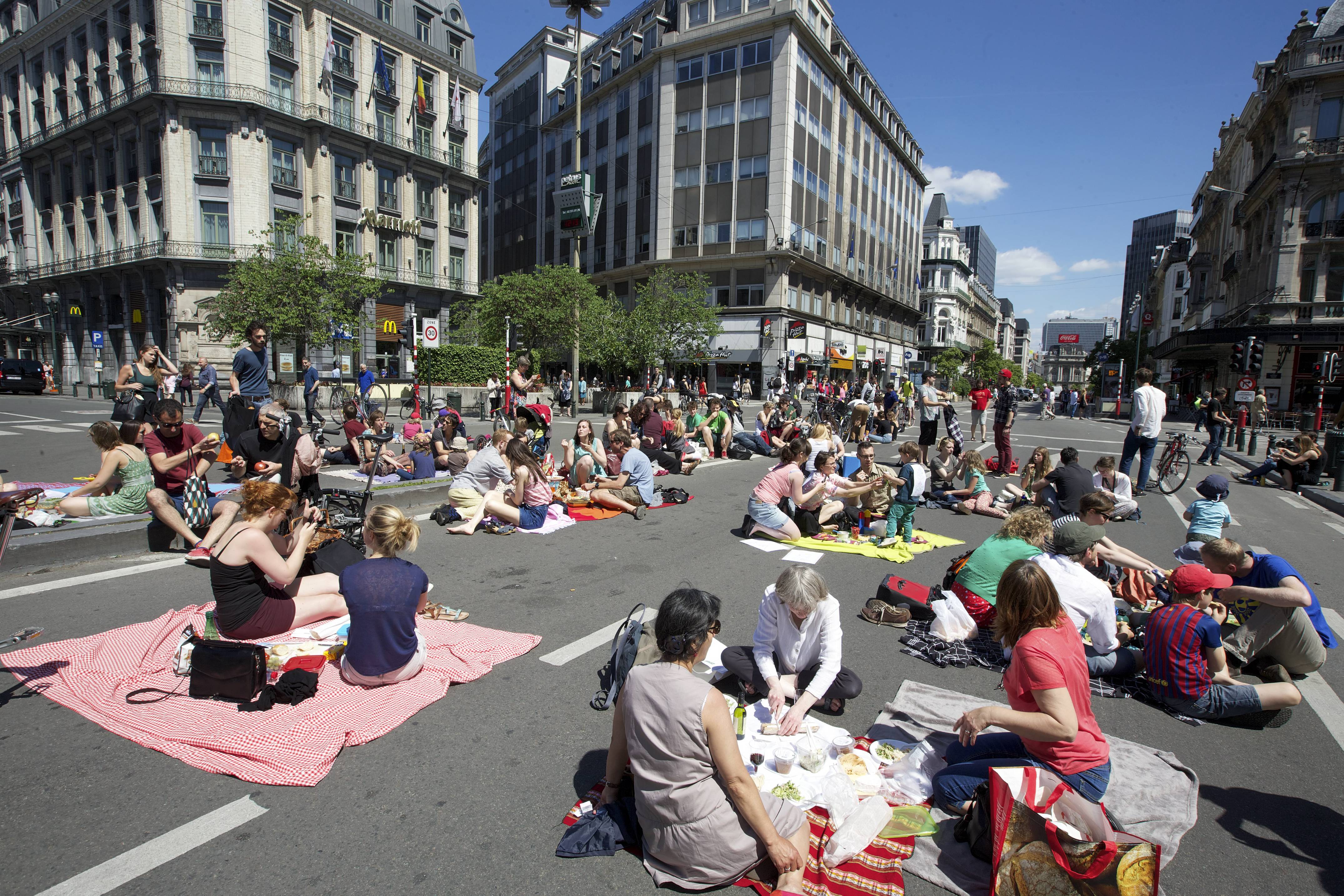 In June 2015, Brussels’ residents organized the fourth edition of ‘Picnic the Streets in front of the Bourse stock exchange to ask for a better mobility plan for the city center /Belga

Ten years ago, during Picnic The Streets, up to 3000 citizens claimed the public space on the Boulevard Anspach in the heart of Brussels for the first time to banish the car from the city center. On Sunday, in Cinema Palace, the organization looked back, but they looked ahead to the future.

Afterward, another symbolic picnic was held on Place de la Bourse, and action was held on the bridge at the Vlaamse Poort under the name Picnic The Bridge. At the busy traffic junction of Brussels’ inner ring road, campaigners were calling for a city on a human scale, with fewer cars, less noise pollution, and less air pollution.

The action of civil disobedience on the then busy roadways of the Anspach Boulevard in 2012 resulted from a call from philosopher and economist Philippe Van Parijs (UC Louvain, KU Leuven), which led to a thorough reflection and ultimately to a significant turnaround in the city center. The fact that there is now a car-free zone from De Brouckère to Anneessens is a victory for civil society.

“It was a new kind of action where parents with children came out onto the street, which was fairly unseen. It came from under because, at the time, no politician thought we would make this Place de la Bourse here car-free. It is purely because of the action that it was included in every party program,” says activist Gerben Van den Abbeele.

Making the city together

Making the central avenues of Brussels car-free may have seemed unthinkable ten years ago, but according to Van den Abbeele, it was inevitable. However, despite the outstanding achievement, he still has some reservations. “At some point, politics then takes over completely, as it did with the pedestrian zone, and that has to change in the future.”

“The politicians must now say: how are we going to do it together? It is important that in the future, it happens as a kind of cooperation between the residents, traders, politicians, civil society, and so on. That is a very nice way of preparing the city together for the future.”

The challenges are still there, according to the initiators of Picnic The Streets. That’s why there was also action at the bridge at the Vlaamse Poort for Picnic the Bridge. There they complained about the busy traffic junction and the presence of the city highway on the Brussels inner ring road.

CurieuzenAir, the recent citizen survey on air pollution, revealed that the intersection at the Vlaamse Poort is one of the most polluting in the Brussels Capital Region.  According to the campaigners, the accident-prone intersection where trams, cars, cyclists, and pedestrians meet each other deserves a better layout.

There should be more room for vulnerable road users, and the zone along the canal could become a pleasant meeting place, such as a picnic area. They also want the entire function of the Brussels inner ring road to be questioned. According to the demonstrators, the urban highway in its current form has no future in a capital city, where there should be more room for soft mobility.

Discussions with the Region

The Inner Ring Road, built in anticipation of the 1958 World’s Fair, sucks some 100 000 cars into the center of Brussels every working day. The Ring Road goes around the four points of the Brussels pentagon primarily through tunnels and separate four-lane roads. Still, in the somewhat poorer canal zone, car traffic mixes with cyclists and pedestrians for whom there is hardly any room.

“We are inheriting the city from our predecessors,” says Bart Dhondt, Alderman for Mobility (Groen), in the newspaper De Morgen. “The new Brussels circulation plan comes into force on 16 August, and with Good Move, we are going to take a step toward a more car-free Brussels, and that creates opportunities,” Dhondt says. “We will examine with the region what future we will give to this bridge. We want to see a reduction in car traffic.”

‘Give the streets to the children’

“It is a pity that for ten years, only the central avenues have been considered and far too little about what happens around them. But, unfortunately, in the rest of the center and the neighboring municipalities, very little has changed in terms of mobility,” Van den Abbeele says.

When the newspaper De Standaard asked what he thinks the shipyards of the future will be, Philippe Van Parijs replied: “Give the streets to the children. I was once asked what my utopia would be. My answer was Louvain-la-Neuve in Brussels.”

“That city was built with the underlying idea that children should be able to play first and foremost in all streets. Only in the second place do streets serve to park cars, and only then are they a place where cars are allowed to drive. So it goes far beyond mobility and the environment. That’s how you make a community.”