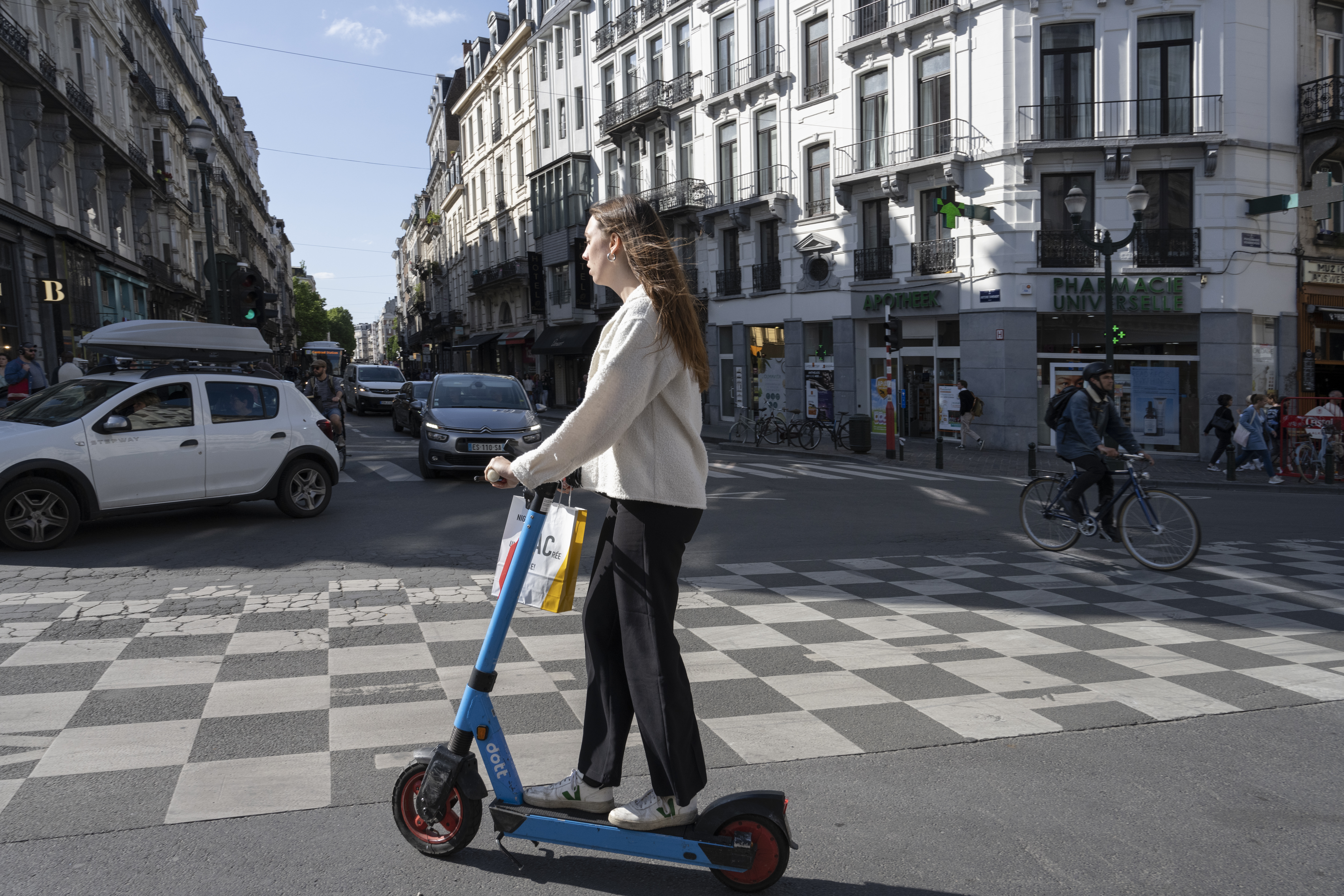 Brussels introduces stricter traffic rules for users of shared e-scooters. In the pedestrian zone, for example, the speed limit is now 8 km/hour /ANP

The Brussels Region is taking additional measures for e-scooters, such as reducing the maximum speed to 8 km/hour in certain pedestrian zones. Brussels Mobility announced this in a press release on Friday.

There will also be adapted parking or drop-off zones and prohibited zones with specific road signs. Parking on the pavement is allowed if there are no signs, provided it does not impede pedestrians and other road users.

Since July 1, new, stricter traffic rules for e-scooters apply throughout Belgium. Users, for example, are banned from the pavement and must be at least 16 years old. It is also no longer permitted to ride an e-scooter with a passenger, and there is a general speed limit of 25 km/hour.

In Brussels, the speed of the e-scooters is limited to 20 km/hour in the Region, except for the pedestrian zone. Brussels Mobility has asked the providers of shared e-scooters to automatically limit the maximum speed of e-steps to 8 km/hour in the pedestrian zone in the city center and the semi-pedestrian area on the Chaussée d’Ixelles between the Chaussée de Wavre and the Fernand Cocq square.

Brussels Mobility explains that other (semi-)pedestrian zones could follow, depending on discussions with the municipalities. Fines for violation amount to 174 euros.

“E-scooters are a handy way to get around, as long as they do not hinder pedestrians and people with reduced mobility,” says Brussels Minister of Mobility, Elke Van den Brandt (Groen). “This is now too often the case. In a few years, thousands of shared e-scooters have appeared on our street.”

According to the most recent figures, there are now 18 060 shared e-scooters in Brussels. Since introducing the shared e-scooter in Brussels in 2018, the Region has long tolerated a laissez-faire policy. The Region still sees the e-scooter as a convenient means of transport that can reduce congestion and improve the quality of life. Still, because of the nuisance and accidents, it is tightening restrictions now.

The poor condition of the road surface, the cobbles, and the tram rails undoubtedly play a role in the high number of accidents, although work is being done to improve the infrastructure, such as building cycle paths that e-steps can also use. And Bolt recently introduced a compulsory alcohol test for users of their devices.

According to the French-language newspaper L’Echo, the regional administration is discussing with operators to gradually limit the total fleet of e-scooters in the Region to a maximum of 15 000, i.e., 25% fewer than at present.

In doing so, Brussels would follow the example of Scandinavian cities such as Stockholm, Oslo, and Copenhagen, where the number of share e-scooters has been significantly reduced because of the inconvenience.

On Friday, the Brussels Parliament also adopted the parking reform of Minister of Mobility Elke Van den Brandt. The plan should lead to a harmonization of regulations between the communes in the Brussels region. But it will also lead to an overall increase in on-street parking rates, fines for non-payment of fees, and the price of residents’ cards.

The last parking plan of the Brussels Region dates from 2009. It is also the basis of the parking component of the Good Move Regional Mobility Plan, which aims to free up road space for other modes of transport and encourage alternatives to the private car.