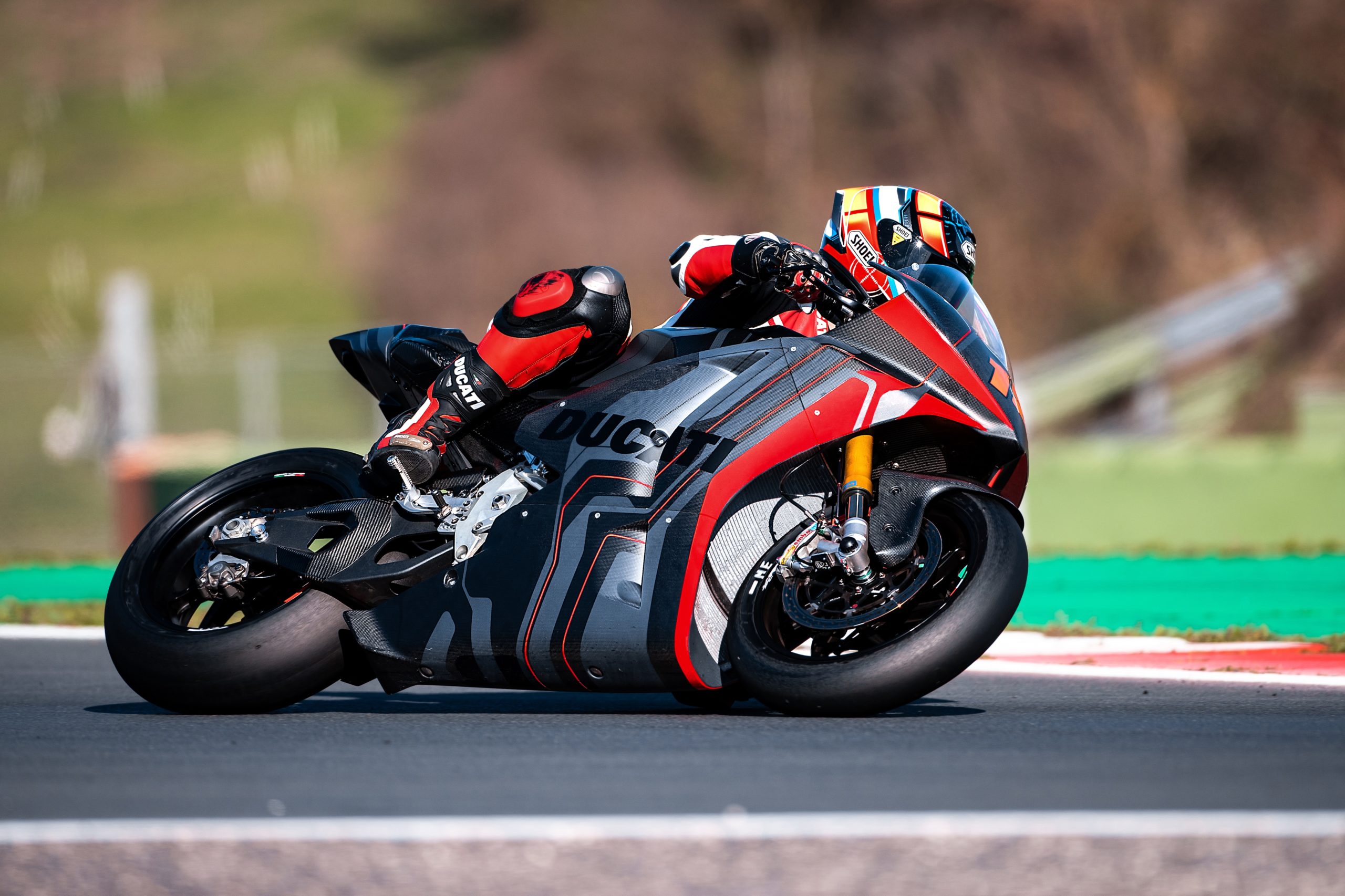 With its first all-electric racing bike, Ducati aims at lap times comparable to the GP versions with a combustion engine /Ducati

Italian manufacturer of performance motorbikes Ducati took the cover of its first all-electric prototype. The V21L will be competing in the Moto E as of 2023, the racing series of which Ducati is the single supplier. While all eyes are on a street version, Ducati’s lips remain sealed for now.

With no e-motorbike in its range and years of excuses, the news came as a surprise when Ducati announced in October last year that it would step in for Energica and build the prototypes for the next season of the all-electric Moto E championship. Promise kept. This is the V21L, a racing bike that reaches a zero-emission top speed of 275 km/hour from a battery pack of 18 kWh.

The project has been in the cooperative hands of Ducati and its racing department, Ducati Corse. The first took care of the design, the livery, and the project management; the latter was responsible for the electronics, simulations of the bike’s dynamics and aero, and finally, the assembly. Ducati Corse will have to ensure that eighteen bikes can participate in the races each weekend.

Interestingly, the carbon loaden V21L undercuts the weight of its predecessor from Energetica by putting 225 kg on the scales instead of 260 kg. Significant progress because the heavy battery was often cited as a burden by the drivers. With 150 hp output remains status quo, but acceleration and performance are better, with Ducati Corse having succeeded in shaving some of the kilos from the concept.

Ducati aims for lap times comparable to combustion bikes, raising the bar to a level that Energetica previously failed to jump over. So, the proclaimed top speed has risen to 15 km/hour (from 160 km/h previously), which should enhance battling at the GP circuits. The torque of the electric motor is 140 Nm.

Ducati points at some unique technical solutions for its all-electric racer. The battery pack has a specific shape, designed to follow the natural looks of the bike’s central area while at the same time functioning as a supportive part (like a combustion engine).

The pack throws in 110 kg, chargeable by a 20 kW socket integrated into the tail. The electric motor weighs 21 kilograms and can cope with rotation speeds of 18 000 rpm. A partner developed it. The onboard network is based on 800 volts to maximize the efficiency of the electric powertrain.

No pausing in the pit

A dual liquid circuit makes sure that the high-performance stress doesn’t result in overheating the pack, cooling it fast and efficiently. Unlike the motorbike from Energetica, charging is possible almost as soon as the Ducati enters the pit.

It must charge for around 45 minutes to get the battery up to 80% (from 10%). Though Ducati withholds to comment, it is quite certain that this prototype will result in a street version sooner or later.