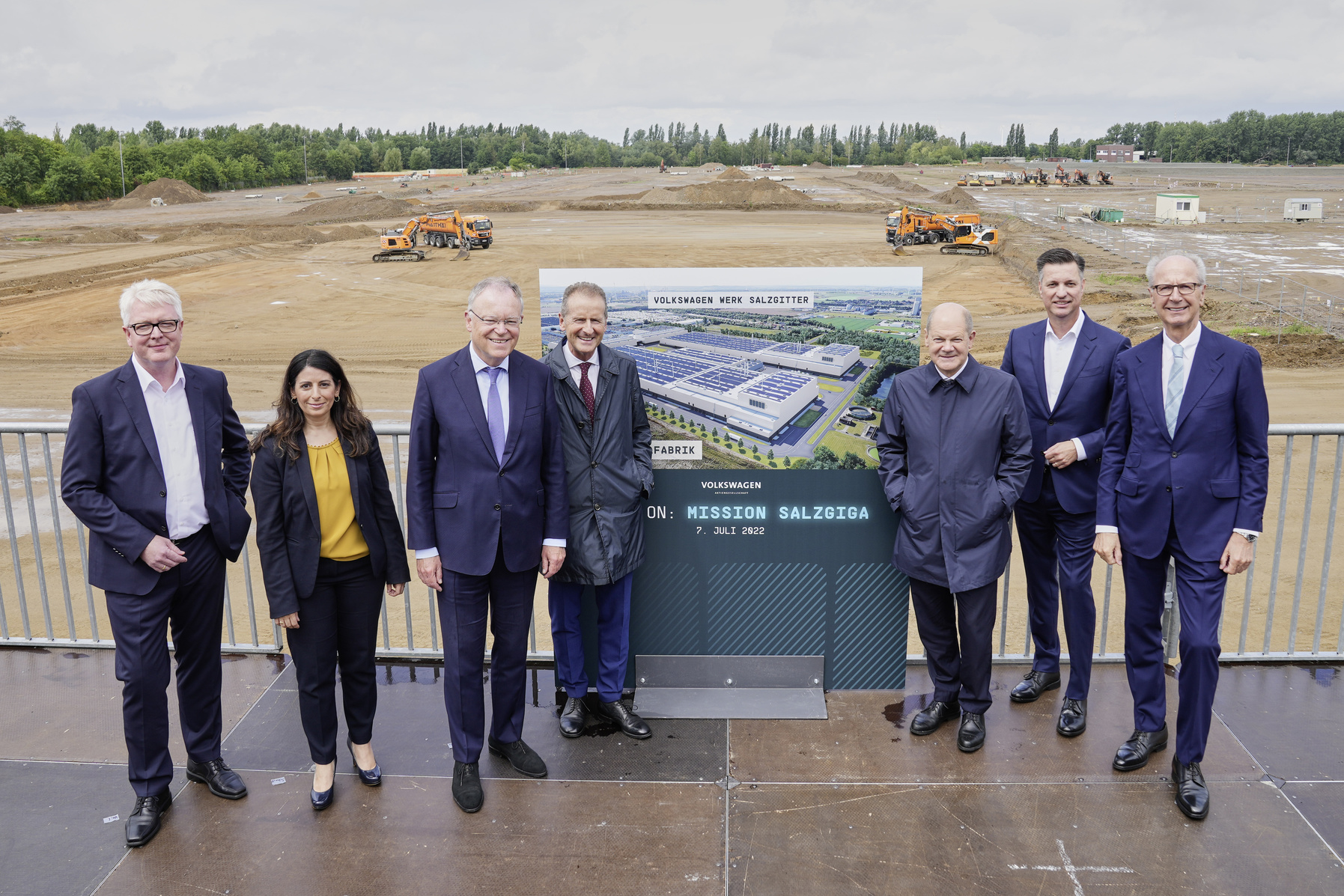 Volkswagen’s cell factory in Salzgitter will become a global battery hub. Next to manufacturing 40 GWh annually, it will feature a Battery Academy and a recycling center. /Volkswagen

Six years after Tesla completed its first Gigafactory, Volkswagen has begun building its own in Salzgitter, Lower Saxony. The construction start marks the roll-out of no less than six battery cell factories for Europe under Volkswagen’s PowerCo umbrella.

“Today is a good day for the automotive industry and Europe.” Those were the words of German Chancellor Olaf Scholz to give the green light for the cranes and bulldozers to officially commence building a battery cell factory in Salzgitter yesterday and lay the first symbolical foundation stone. And symbolical, it is because Salzgitter is also home to a combustion engine factory of Volkswagen. New versus old technology.

The new plant is built by PowerCo, a battery company created by Volkswagen last year. It will be capable of producing batteries for half a million cars, with a capacity of 40 GWh, made by 2 500 employees. Manufacturing is scheduled to start in 2025. By the end of the decade, the Volkswagen Group wants to build cells for 200 GWh annually.

PowerCo, which is globally responsible for Volkswagen’s Gigafactories and is the company’s leverage for entering the battery business, will invest €20 billion in battery cell plants with Salzgitter functioning as a blueprint.

It will also be Volkswagen’s global hub for batteries, supporting the development and testing of new technologies, featuring a Battery Academy and a recycling center. PowerCo says it is committed to the production of sustainable cells, made from green electricity and with a recycling rate of 90%.

Those cells are called unit cells, with a prismatic housing, that will feature in eight of the ten BEVs within the company’s product plans. It reminds of Volkswagen’s scalable technologies in the past, like the MQB platform. The cells can be combined with both NMC and LFP chemistries and will feature in a broad range of very different vehicles with very different demands.

Volkswagen says that, unlike other cell manufacturers, these cells are very flexible, allowing for a variation on specific requirements, like higher or lower material contents, while still maintaining a highly standardized production process. Volkswagen’s streamlining of the factory lines, to increase output per hour, has been inspired by Tesla’s manufacturing strategy.

Except for Martorell, Spain, exact locations still need to be flagged off for the three remaining Gigafactories, with Eastern Europe as a likely candidate. The sixth one is a collaboration with Swedish battery startup Northvolt, in which Volkswagen holds a stake of 20%, and will be erected in Skellefteå, in the upper north of Sweden. Apart from that, Volkswagen is also scouting for locations in North America.

Herbert Diess, CEO of Volkswagen AG, concluded: “Today we are not only laying a foundation stone but also marking a strategic milestone. The battery business is one of the cornerstones of our NEW AUTO strategy, which will make Volkswagen a leading provider of the sustainable, software-driven mobility of tomorrow. Establishing our own cell factory is a megaproject in technical and economic terms. It shows that we are bringing the leading-edge technology of the future to Germany!”