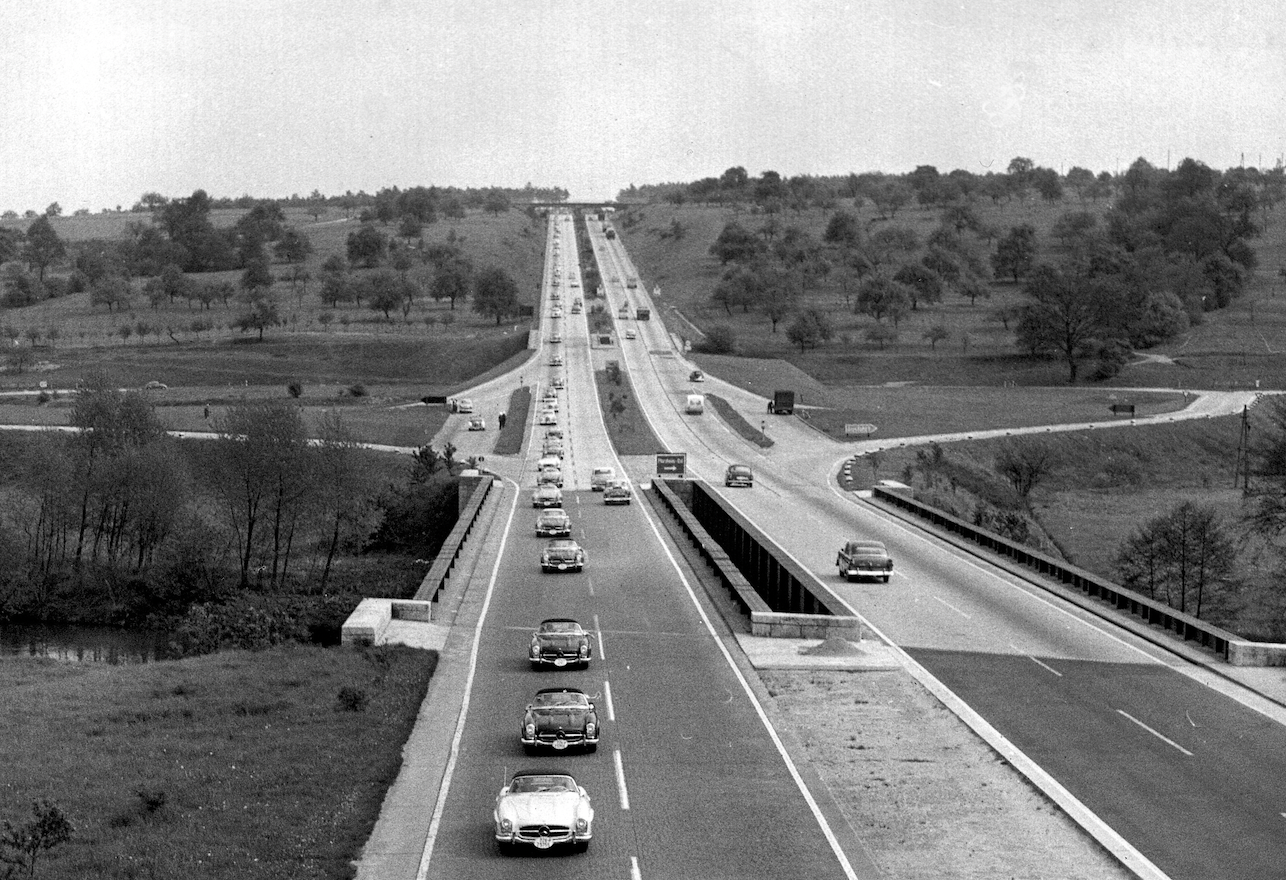 In 1932, Konrad Adenauer, regarded the founding father of the idea, inaugurated the first stretch of Autobahn, which has helped shape the nation as an automotive trailblazer /Mercedes

In contrast to popular belief, the famous Autobahn wasn’t an idea from Adolf Hitler. Instead, the spiritual father of these freedom highways, where cars aren’t subjected to speed limits, was Konrad Adenauer.

He opened the first stretch 90 years ago. While the Autobahn has always been a pillar for the German automotive industry, its ungoverned speed rule is at risk because of environmental pressure and the energy crisis.

‘This is what the German roads of the future will look like.” With those words inaugurated Konrad Adenauer, as the mayor of Cologne, on the 6th of August, a stretch of highway between his city and the then-capital, Bonn.

It was 25 kilometers long and designated as the A555. Immediately after, motorized vehicles started exploring travel at their maximum speeds on this dual carriageway without intersections.

Those weren’t many, which made it difficult to justify the expense of the highway. But it was believed that a network of these fast roads would gradually boost the challenging economy, while they were also regarded as symbols of freedom. Slogans like ‘Freie Fahrt für Freie Bürger’ (free speed for free people) promoted the Autobahn.

The A555 took three years to construct and was the first official ‘Fernverkehrsstrasse’ (long-distance road). Ten years earlier, in 1921, a test stretch was opened near Berlin, called AVUS, but that wasn’t open to the public. Only in 1958 was it incorporated into the highway system following an extensive work-over.

When Adolf Hitler came into power in 1933, he eagerly adopted the vision behind a national network for fast traveling transport but adapted the spirit – not to mention the military advantages. As he regarded Adenauer’s A555 as the playground for the rich, happy few – and Jews, he wanted to bring the concept to the people.

Together with his plan of building a car for the people (Volkswagen), which would ultimately lead to the conception of the Beetle, he unfolded his plans for a ‘ReichsAutobahn’ (state highway) covering entire Germany. Since this was the first time the name Autobahn appeared, it was widely adopted in Germany that the dictator was the brain behind it.

The first section completed under the reign of the German National Socialists was opened in 1935 and connected Darmstadt with Frankfurt. By the time the second world war broke out and further construction was paused, Hitler had established a network of 3 600 kilometers across the country. However, these roads weren’t as successful as nazi propaganda wanted them. Lots of them were empty or served as bicycle roads.

Though the Autobahn gathered much of its fame because of the non-existent speed limits, this wasn’t unusual at the time. Not until the sixties, with traffic and incidents increasing, European countries widely began to impose them on highways.

But Germany has always stubbornly stuck with nothing more than a recommended speed of 130 km/hour on its freeways. The argument is often that it has helped their nation become the automotive leader worldwide.

But opposition is rising. The German Green Party had vowed to impose a ‘Tempolimit’ once elected but had to step down from that demand during the formation of the government.

Germany’s biggest automobile club, ADAC, has been a longtime defender of the absence of a speed limit but has softened its stance and called for a study to investigate the effects.

However, the Autobahn remains a stronghold for many Germans. Even a temporary limit in the wake of the current energy crisis spawned by the Ukrainian invasion was ditched. “Germany doesn’t have that many speed limit signs in stock,” responded Transport Minister Volker Wissing (Free Democrats).