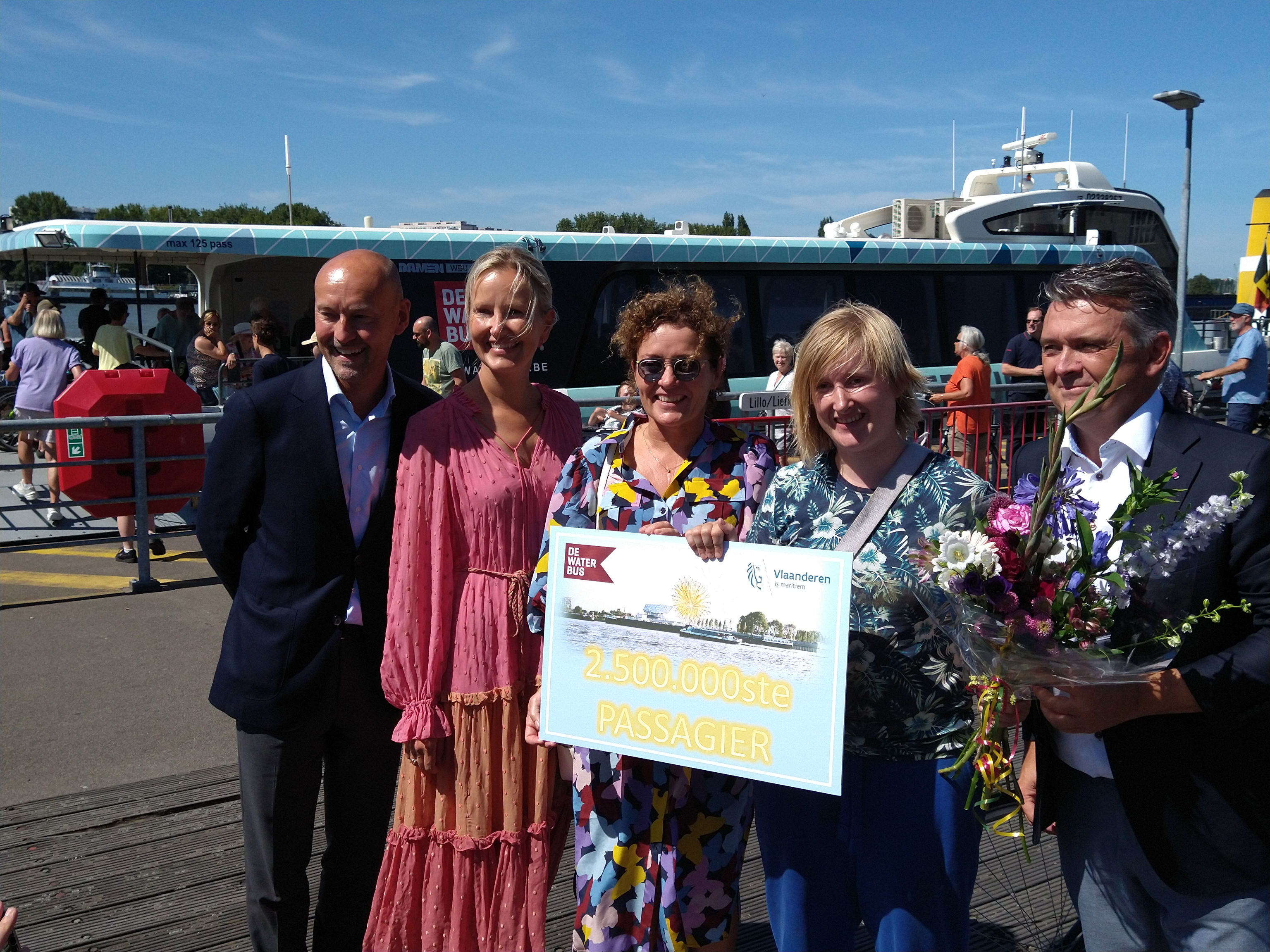 The 2,5 millionth visitor to the Waterbus in Antwerp, 29-year-old Anna Roza Holvoet, is being honored by Flemish Minister for Mobility Lydia Peeters. She received a one-year subscription as a gift /Belga

In Antwerp, the 2,5 millionth passenger on the Waterbus that travels down the Scheldt was honored on Tuesday. According to the Flemish government, which is funding the project, the Waterbus is very popular and has left behind the logical dip of the corona period.

One in three passengers also takes a bicycle on board, which means that many Antwerp citizens are engaging with mobility in a new way. The 2,5 millionth visitor was given a one-year subscription worth 658 euros.

The Waterbus was launched in 2017 on the initiative of – and with funds from – the Port of Antwerp. At the time, it involved two barges. Since thenn it has been scaled up to six that sail up and down the Scheldt in the Antwerp region, with eight stops from Hemiksen south of the city to Lilo in the port area.

There are daily trips, and the bus is also available on Saturdays, Sundays, and holidays. Every thirty minutes, there is a bus in both directions.

Flanders has since taken over the financing from the port. “The demand for a water bus was already high at the time among a lot of workers in the port, and we have seen in recent years that it has only increased,” says Flemish Minister of Mobility, Lydia Peeters (Open Vld).

“The offer has been followed. It is not a self-supporting project, but it is an important story in the context of modal shift and sustainable travel. That is why it gives a huge added value.”

Originally intended as a kind of ‘lesser discomfort measure’ during the period of the Oosterweel works, Peeters says it is now unthinkable that the Waterbus would disappear again.

Since the contract with the current operator, the Dutch company Aquiline, expires, a new market consultation will be held to find an operator – the same one or a new one – for the next five years.

According to the Gazet van Antwerpen, Aquiline, which employs 70 crew members and office workers in Antwerp, has already indicated that it would like to expand the service further with a new government contract.

Aqualine has two new ships under construction that will eventually replace two smaller Waterbuses. And there is also a lot of interest from municipalities along the Scheldt to build a stop.

Last month was a record month for the Waterbus, transporting over 104 000 passengers. the previous record dated from August 2021, with 90 000 passengers.