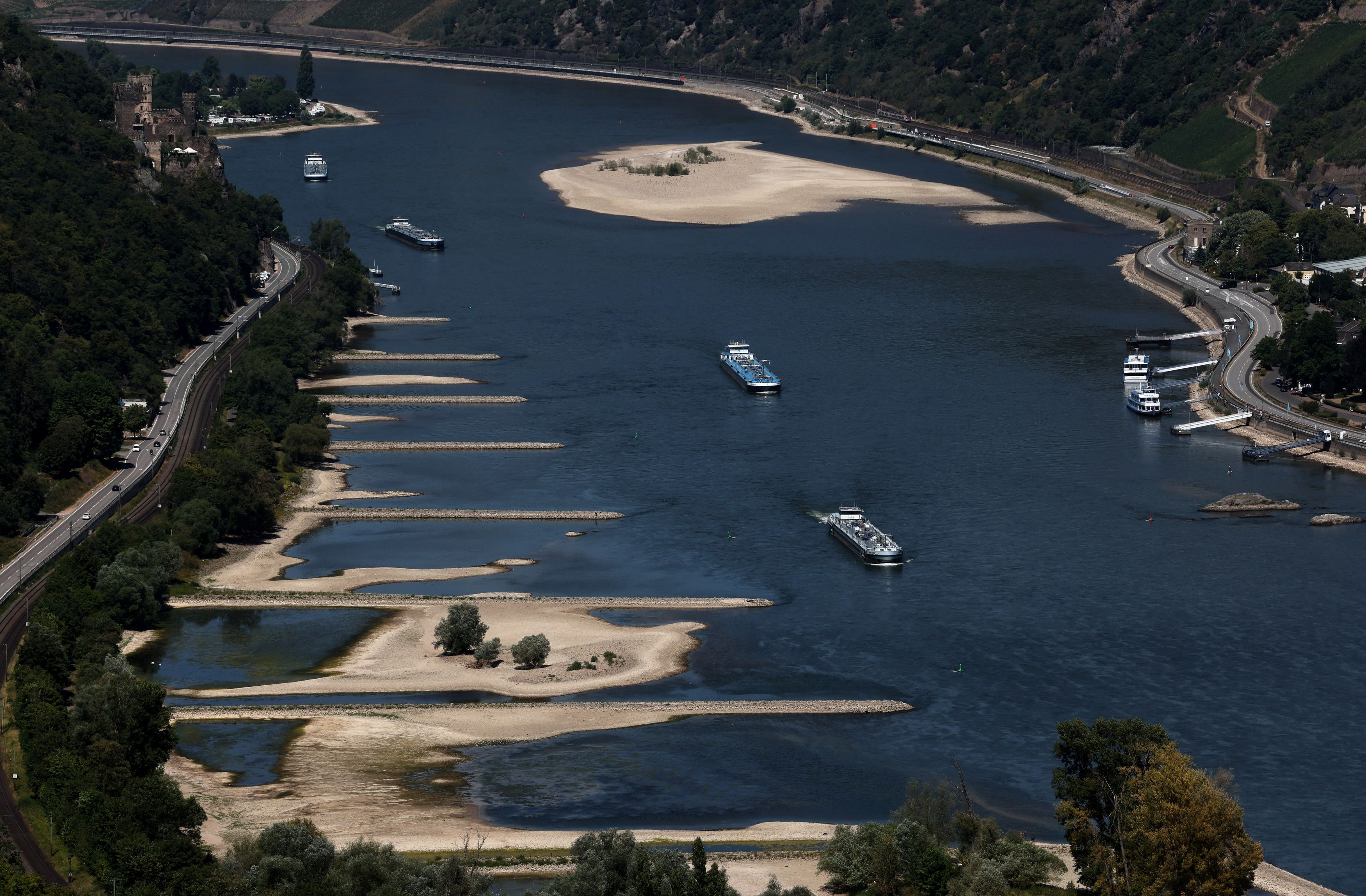 Transport vessels cruise past the partially dried riverbed of the Rhine river in Bingen, Germany. The low level of the Rhine makes large parts of the river unnavigable, a threat to the German economy /Reuters

Due to the persistent drought and record temperatures, the water level in the Rhine near Kaub, between Koblenz and Mainz in Germany, is dropping so low that many cargo ships will no longer be able to sail there as of Friday.

That is a problem for the industry. The Rhine, one of the busiest waterways in the world, is one of the main canals linking Germany’s industrial centers with the North Sea ports from which products are exported to world markets. The Bundesanstalt für Gewässerkunde (BfG), an official research agency for Germany’s waterways, does not rule out further restrictions on shipping.

Usually, the Rhine, with 1 233 kilometers, one of Europe’s longest rivers, is at its lowest after the summer. At the end of October 2018, 25 centimeters were measured in Kaub, not far from Loreley Rock, a historically low river level. Currently, the water there is dropping toward 30 centimeters – barges theoretically need at least 1,5 meters. Some barges are already turning back to avoid getting completely stuck.

It is only the second time in 100 years that the water level in Germany is so low that it makes the Rhine challenging to navigate for cargo ships. Transport by road or rail is considerably more expensive, but some ships can only be partially loaded at low tide, to a third or even a quarter. At a certain point, it then becomes unprofitable to sail.

The price of transporting by ship has exploded: from 20 euros in June to 94 euros per ton in August. Another example: transporting fuel to Basel in Switzerland now costs over 270 euros per ton compared to 25 euros at the beginning of June.

Moreover, the German railway network suffers from chronic congestion. According to the newspaper De Tijd, to transport the cargo of an average cargo ship by road would require more than 100 trucks. And Germany is already suffering from a severe shortage of truck drivers.

Artery for the economy

Ships transport crucial goods and raw materials along the Rhine, which flows past some of Europe’s most important industrial areas. Chemical company BASF and steel group ThyssenKrupp, among others, rely on the river to supply their factories with fuel and raw materials. The many car factories in southern Germany also use the river for transporting goods.

Last week, the German energy company Uniper warned that a major coal-fired power station near Frankfurt could hardly be supplied via the Rhine. This could lead to energy shortages.

Gas prices also increased again on Wednesday. Supplies for the winter are currently being brought into Europe. Due to the war in Ukraine, supplies from Russia are reduced, and the Rhine is used much more than in recent years to transport coal.

80% of goods travel over the Rhine

Last year, 300 million tons of goods and raw materials were transported via the Rhine. About 80% of all goods transported by water in Germany go over the Rhine. The water level should continue to drop until the beginning of next week, says BfG expert Bastian Klein. However, the low water level would not be resolved quickly.

In France, Switzerland, and Italy, the level of some typically very large rivers, such as the Loire, the Seine, the Danube, and the Po, is at an all-time or unusually low. The lowering of the river levels has, of course, also had repercussions on the environment. The rise in water temperature, which reduces the amount of oxygen, is a threat to aquatic fauna and flora, which are already under threat from economic activity.