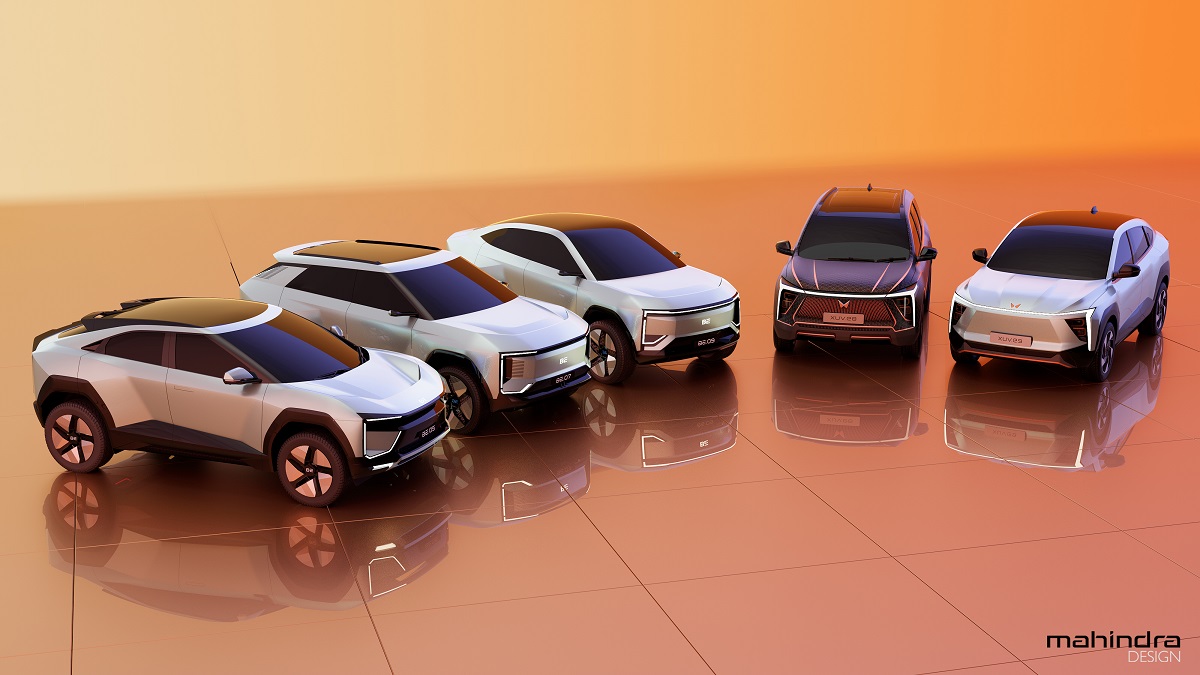 With BE and XUV, Indian carmaker Mahindra launches two new sub-brands to drive an electrification strategy that must boost its presence on worldwide markets /Mahindra

Following a teasing campaign, Indian carmaker Mahindra has finally unveiled the models, under concept guise, that must drive its global electrification strategy. The carmaker showed five fully electric SUVs that will be sold under two new sub-brands: BE and XUV.

It doesn’t pass by unnoticed, the all-new electric family from Mahindra. Under the brand BE come three sturdy and futuristic-looking SUVs, which are variations on the same theme. The proof is their wheelbase, which is interchangeable for all models with a length of 2,77 meters.

The O5 is the most compact and sportiest high-rider in the BE range, combining a low roofline with a coupé-like trunk and very angular wheel arches. The BE09 follows a similar design strategy, with a different hood, but Mahindra doesn’t reveal any clues about its dimensions.

The third model, dubbed BE07, is the most conventional. Sharing much of its looks with its brethren, the cockpit sits more up straight. Its size of 4,5 meters pitches it against a Volkswagen ID.4. We don’t mention it randomly. Mahindra struck a deal with the German carmaker to supply MEB components for these SUVs’ platforms. So it’s basically derived from it.

German roots or not, this is very much a dedicated platform – in contrast to its existing range of small EVs (see below). Called INGLO, fully transcribed as IN(dian in heart) and GLO(bal), this skateboard architecture is scalable and adapted to house vehicles of all sorts and sizes. According to Mahindra, it excels because of its lightness.

The second line in Mahindra’s electrification strategy is called XUV. With 4,7 meters, both SUVs in this portfolio sit above the BE range. The XUV e8 will hit the market in December 2024 and is the most conventional model of all these concepts, reminding of a Mitsubishi Outlander with more ground clearance. The e9 can be regarded as the coupé version and follows half a year later.

As for batteries, Mahindra mentions blade and prismatic types. Though no exact details, like origin and brand, are announced, the first is most likely BYD’s technology, the only pack resisting the test with penetrating nails. The size of the packs is 60 and 80 kWh, with peak charging at 175 kW.

Further details on charging and autonomy remain undisclosed. However, the rear-wheel-driven variants will have an output of 231 hp and 286 hp, rising to 341 and 395 hp with four-wheel drive. Depending on the model, the latter can tick a standstill to 100 km/hour between five and six seconds.

Not a first step

The electric SUVs aren’t Mahindra’s first steps in the EV world. On the local Indian market, the carmaker has commercialized two cars (eVerito and e2oPlus) with a pair of zero-emission three-wheelers and a small van. These models are positioned entry-level, serving a broader and less wealthy customer base, and are badged Mahindra Electric.

The new electric range shows how diverse car brands can become through the ease of economy of scale electrification evokes. It must also help Mahindra to become a global player. No exact date or plans have been made official about whether or not these SUVs, or some of them, will come to Europe.