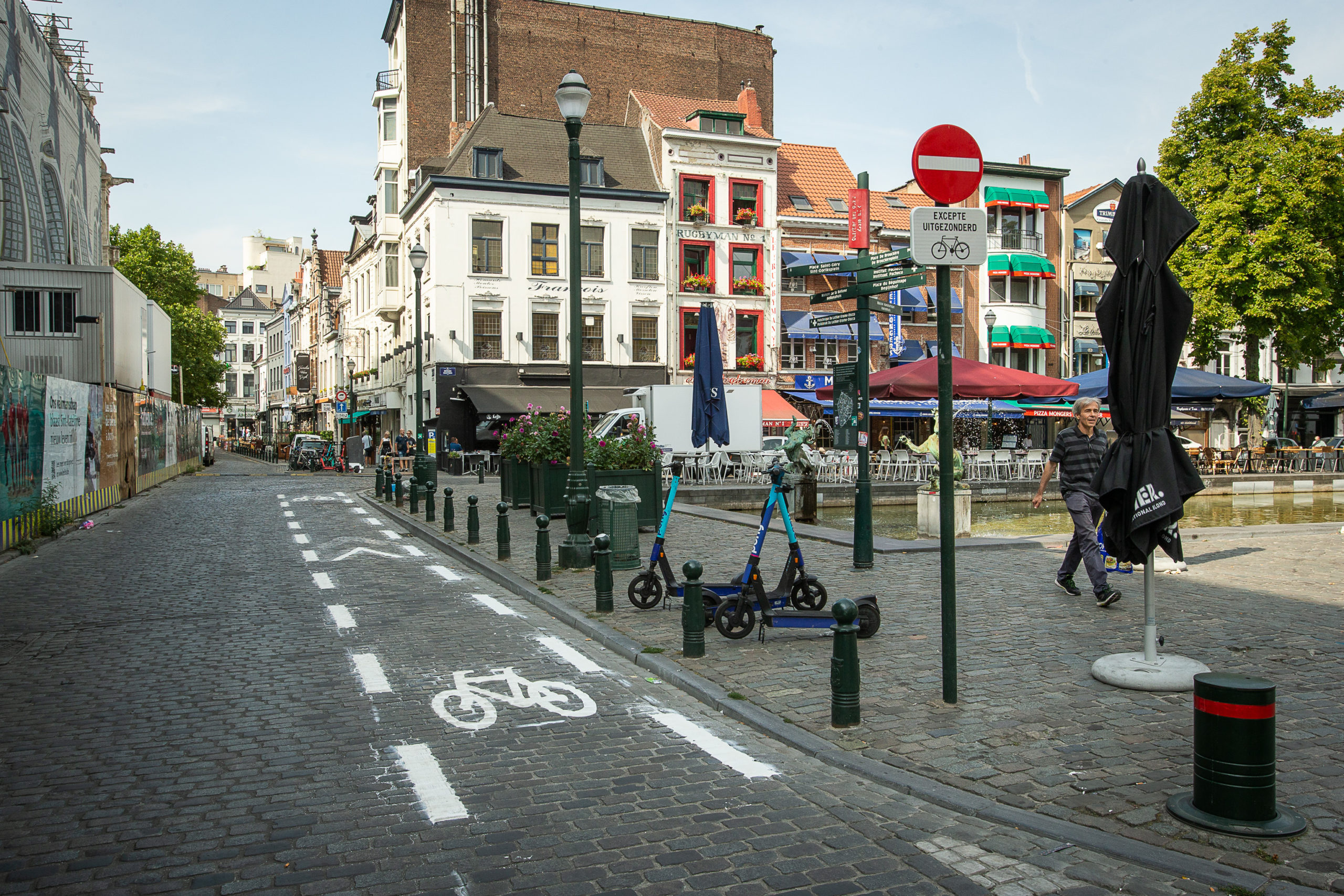 The first day of a new circulation plan for the city center in Brussels. The latest changes were made on Tuesday morning and stewards will be in many places to guide motorists and other road users in the right direction /Belga

The new ‘Good Move’ circulation plan in the Brussels Pentagon was launched on Tuesday. Stewards were posted in many places to guide motorists and other road users in the right direction. A welcome solution, because on the first day of the new plan, some places had an extra 30 minutes of traffic jams.

Brussels Alderman for Mobility, Bart Dhondt (Groen), sees that it still requires some adjustment on the ground and only expects a stabilization within a few months. However, the new circulation plan ‘Good Move’ should make the Brussels city center more car-free.

The new circulation plan aims to reduce transit traffic in the busy and inhabited districts of the inner city and give more space to pedestrians, cyclists, and public transport.

Less through traffic – a third of the traffic in the Pentagon would be transit traffic that has no destination – and more space for vulnerable road users and public transport are the guiding principles. Traveling by car in the inner city will remain possible, but it will become more difficult to cross the city.

Car traffic is directed to the Brussels inner ring road as much as possible using new zones with limited access and adjustments to driving directions and one-way traffic. On the other hand, visitors to the Pentagon are guided to the nearest car park through destination loops.

On Tuesday evening, traffic in the lower town and at the predictable trouble spots was well jammed; in some places, it was busier than usual on the road. Up to more than 30 minutes of traffic-jam time in places connected to the small ring road where you would otherwise easily drive through were no exceptions.

New one-way streets (about sixty streets and squares have changed their status) or circulation loops that make you end up in a traffic jam: most Brussels residents or visitors with a car had to find their way around the new system on Tuesday.

Especially on the inner city’s inner Ring Road, roughly between the Vlaamse Poort in the Canal Zone and Wetstraat in the upper town, everything turned red. In some neighborhoods, such as Cureghem, the circulation plans had already been implemented earlier, but they met with opposition from residents who painted over traffic signs, among other things.

In any case, the stewards will have their hands full. Sometimes the interventions are also incomprehensible. For example, if you live on the Hooikaai and want to leave the city toward Antwerp or the coast, you can no longer turn left at the IJzerplein or cross that square.

“We have deliberately chosen to start in the summer. There is less traffic in the city, and some of the population can already adapt. We expect some more problems in September, and there will be people on the ground again. In the meantime, we will continue to pull out the communication card to inform people,” Alderman for Mobility Bart Dhondt says.

“People still need to adjust; that was to be expected. That is why police and stewards are present today to guide people. However, it can still happen that people drive in the wrong direction,” says Dhondt.

“To evaluate whether the plan is working or not, you have to count on five to six months. Then we can say that the new traffic schedule has stabilized. We will then be able to see whether our goals have been achieved. During the evaluation, we will see whether there are any negative side effects, with quiet streets suddenly swallowing more traffic. That is not the intention. Then we can adjust the plan if necessary,” adds Bart Dhondt.

As accessible as possible

The circulation schedule not only requires an adjustment from car drivers but also has consequences for traders and suppliers. Exceptions can be requested. Above all, the city remains easily accessible, Dhondt assures.

“We have everything here regarding public transport, there is an ever-improving bicycle infrastructure, and there are finally a lot of parking spaces in public car parks. From September onward, the transfer car parks will be free. We want to make the city as accessible as possible. All we are asking is: find the best way to get to Brussels; maybe it is not necessary to drive your car into the city center,” says Dhondt.

Brussels Mobility Minister Elke Van den Brandt (Groen) hopes the effects of the new circulation plan will soon become apparent. “We hope people will notice that there is more space, less noise, and more clean air so that the quality of life improves, and people feel like visiting the city,” she says. “Of course, we will evaluate after a few months. Adjustments must be made if there are nuisances or real problems in certain streets.”

Anyhow, the new measures leave no one indifferent. So let’s wait and see what this will mean in September when the schools start up again, and political life in Brussels gets back to normal.

All information and the circulation plan can be found on www.brussel.be/goodmove.