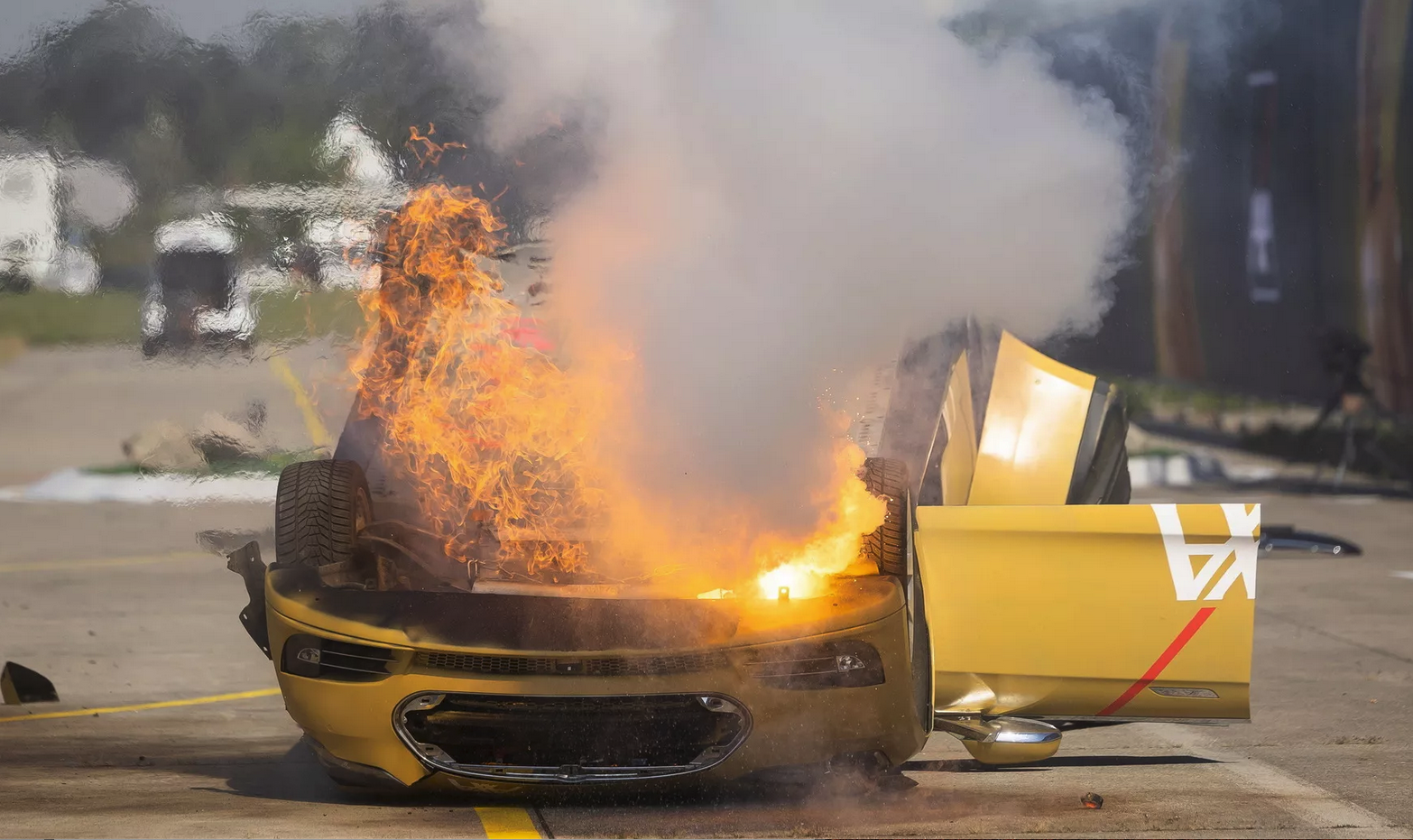 AXA is joining the list of insurance companies pointing at the higher accident rate with electric cars. A probe from their Swiss department unveiled that EV drivers are 50% more involved in accidents due to inappropriate driving behavior.  But ‘fake’ images of a burning Tesla, which turned out not to have a battery and the fire being ignited remotely, caused a real social media storm.

In an official statement, AXA has now apologized for the fake fire in the crash test with the Tesla Model S. “We regret if we have given a wrong impression or caused misunderstandings about electric mobility,” the insurer said.

The press release continues: “During the simulation of an accident, in which an electric car catches fire, we had to take measures to ensure the safety of the public. For example, the test car had no battery, and the fire was started remotely. In addition, the crash test with a Tesla model did not cause any damage to the car’s underbody that would trigger a battery fire, contrary to what the recorded images might suggest. Therefore, this test did not confirm this accident scenario. We should have explicitly mentioned this fact in the communication following the test, especially in the press release and in the images provided.”

Auto24.de uncovered the misleading nature of the crash test shortly after the study results were unveiled. After AXA confirmed the removal of the battery pack the German site concluded: “The alleged crash test by AXA insurance is increasingly turning out to be a show event without any real gain in knowledge.”

Interestingly, another insurance company, AutoinsuranceEZ, did a survey on car fire accidents based on recalls and concluded that hybrids have the highest risk, followed by ICE cars while electric cars ranked at the bottom.

However, it wasn’t AXA’s intent to show that BEVs are more prone to catching fire, but to demonstrate that the accidents they cause result in more material damage than average.

The insurance company interrogated more than 1 200 EV drivers and matched the results with its case data. Though many buyers of an electric are very optimistic about the experience (98% don’t want to return to a combustion engine), the risk of them causing an accident lies significantly higher: 50%.

The explication is to be found in the different acceleration nature of EVs, instantaneously providing their maximum torque resulting in a catapult effect when putting the right foot down. The phenomenon is called ‘overtapping’.

“Our analyses show that the main risks appear not at the time of speed reduction but at the time of acceleration,” says Michael Pfäffli, Head of Accident Research and Prevention at AXA. Furthermore, switching to electric driving demands familiarisation, and half of the interviewed drivers admitted they had to go through a learning curve.

The effect worsens with more powerful EVs. Without defining what a powerful EV exactly is, AXA claims that these cars cause 30% more damage in an accident. This is attributed to their extra weight and drivers coping with even more difficulties when controlling acceleration.

“This can result in a voluntary, jerky, uncontrollable acceleration,” explains Pfäffli. Without providing exact numbers, AXA also states that the share of powerful EVs in accident statistics is noticeably larger.

The overtapping effect of misjudging the accelerator pedal shows in the rate of maneuvering accidents while parking. These grow by 56% in the case of an EV. The risk of crashing without a third party involved rises by 46%.

And then there’s some physics. Heavy batteries lead to more mass and more damage in the case of an accident. According to AXA, a car of 2 000 kg, not unusual for an EV, causes 10% more destruction. And if it hits a combustion car older than ten years, the risk of physical harm for the occupants in the latter rises by 20%.

AXA illustrated its results with crash tests in Zürich. One of them featured a Tesla hypothetically missed a braking point shooting itself over a roundabout catching fire. “It is to show that the Achilles heel of an electric car is the underside. With no extra protection for the battery pack,” says Pfäffli. It must be stressed that the insurance company deliberately put the car in flames using pyrotechnics. The Model S didn’t catch fire on itself.

It did so because the insurer wants to appeal to drivers to be aware of that worst-case scenario and for car makers to take notice and strengthen this – induced – weakness. Quenching the fire of an EV is a complex rescue mission involving water tanks to submerge the car to end battery cell thermal runaway.

It is not the first time an insurer has highlighted the increased accident risk with EVs. For example, the Dutch company Voogd&Voogd claimed a higher accident involvement of 40%. Flemish news broadcaster VTM Nieuws also investigated and came to the same conclusions as AXA: EVs are twice as often involved in road accidents.