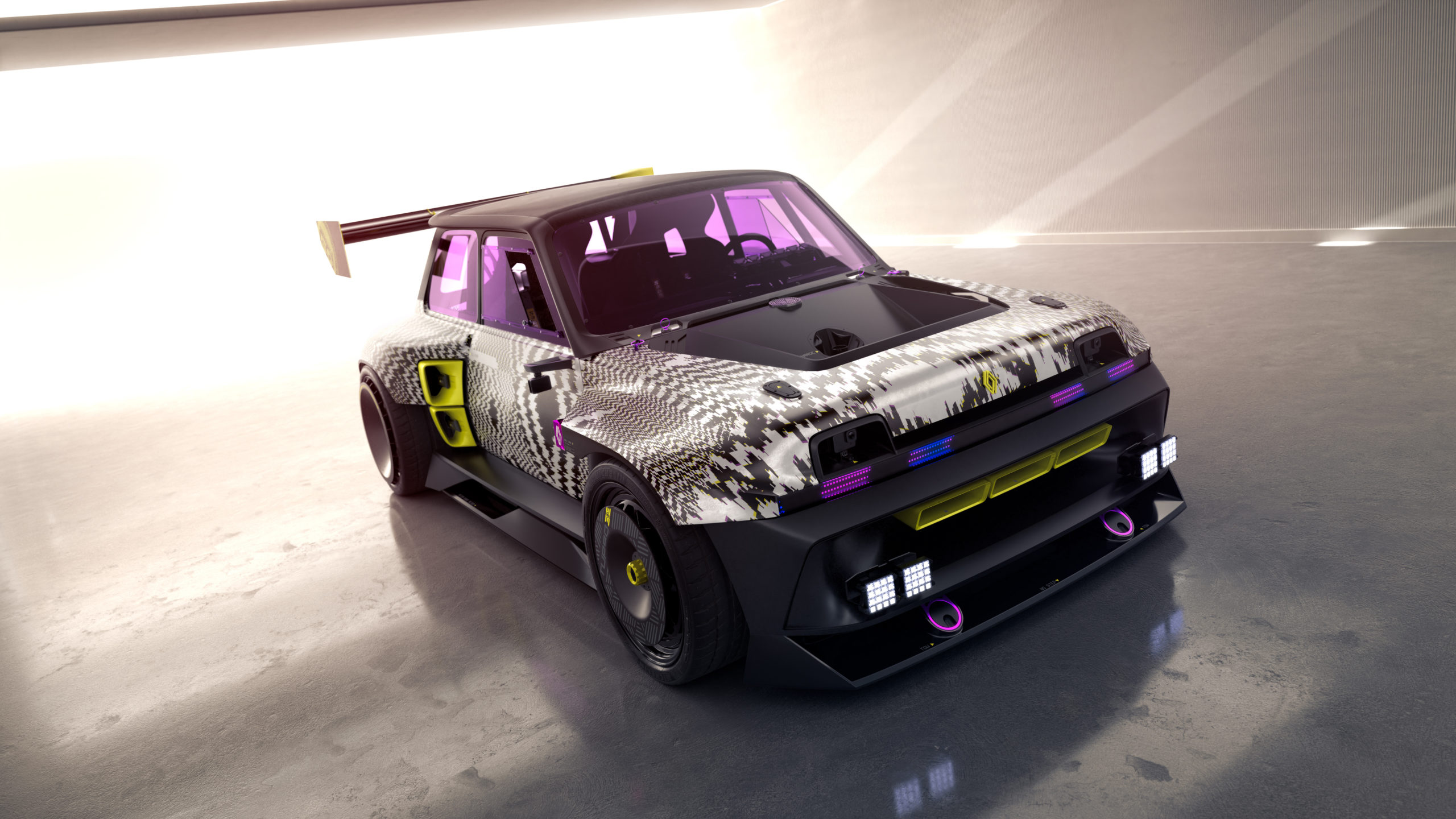 The R5 Turbo 3E bridges past and future and will be a show-stopper at the Renault stand in the upcoming Paris Motorshow. /Renault

Who says a birthday cake can’t be spicy? Celebrating 50 years of its R5 icon, Renault pulls the veils of the R5 Turbo 3E, a commemorative concept car following in the footsteps of the iconic Turbo series. This all-electric sports version, limping between the real and virtual world, will be showcased to the public at the upcoming Paris Motor Show.

With its mean wing at the back, exuberant wheels, and monstrous diffusor, it will be difficult not to notice the R5 Turbo 3E in Paris. But first, the concept car stops at the Chantilly Arts&Elegance, opening doors on the 25th of September. It’s a Concours d’Elegance, though elegance isn’t exactly a guideline here.

Renault Design Director Gilles Vidal explains: “(There are) numerous references to the world of car racing and video games.(…) it is at the frontier between real and virtual realms.” For example, flashing LEDs on the sides must evoke eighties video games and highlight when the car is drifting. In the racing corners of Web3, a digital double of the Turbo 3E will appear, while non-fungible tokens (NFT) will also be available.

The name of the car bridges past and future. The number 3 follows in succession to the Turbo 2, the muscular version of the cult R5 that Renault produced in Belgium from 1980 to 1986, alongside its factory in Dieppe, France.

The concept swaps the mid-engined layout for a purely electric driveline mimicking the original. Two electric motors each turn one of the back wheels, and the battery pack of 42 kWh, weighing 520 kilograms, is situated in the trunk removing the back-seat, just like in the glory days.

With an acceleration from standstill to 100 km/hour in 3,5 seconds and a top speed of 200 km/hour, Renault is even specific about the performance and the power. Total output is 380 hp, and torque peaks at 700 Nm.

The latter will help write those rubber stripes in the claimed Drift Mode. As a child of its time, Renault notes that such driving prowess can be recorded on camera since it has foreseen attaching arms in the interior, which is filled with a retro ambiance.

Though this concept is a birthday present and more or less concludes a year of celebrations, it is also a prelude for the upcoming all-electric new-generation R5. It’s not unthinkable that Renault is preparing a sporty derivative, although the Alpine name would be better suited to fit that bill within the framework of the French car maker’s Renaulution plans.

Whether that sports car ultimately would take the shape of the Turbo 3E seems much less likely. Contrary to the all-electric R5, hitting the market in 2024, which will copy last year’s unveiled concept version to a great extent.