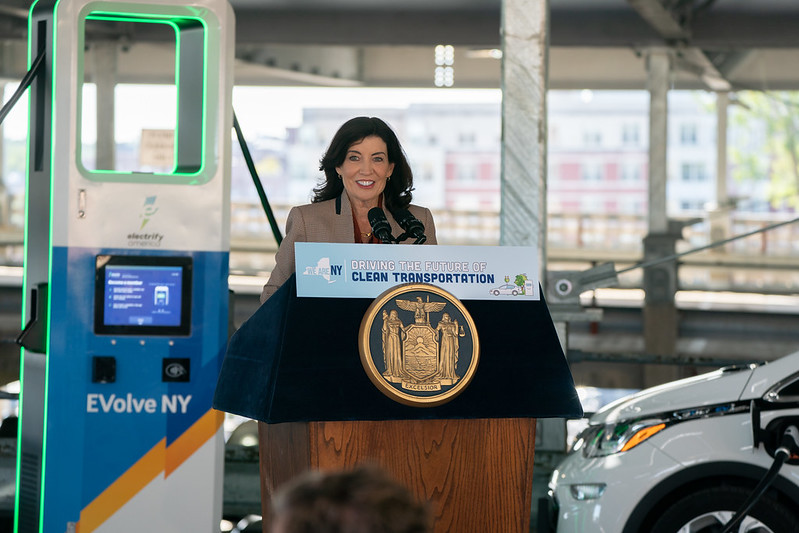 New York State has officially banned the sale of new, emission-intensive passenger vehicles by 2035. Governor Kathy Hochul announced this on Thursday. It thus follows the example of California, which in August made the historic decision to ban sales of new gasoline-powered cars by 2035.

In addition, several local transit agencies will also commit to greening their fleets with the second wave of deployments of electric buses. Over the next five years, New York will invest more than 1 billion dollars in zero-emission vehicles of all weight classes.

Governor Kathy Hochul had already set the goal last year but had to wait for legal reasons for California to pass its own law. So she can now move on to the next stage and has asked her departments to prepare the appropriate texts, including intermediate targets for 2026 (35% of sales) and 2030 (68% of sales) before reaching 100% of sales in 2035.

By this date, all city cars, sedans or saloons, SUVs, and pickups carrying passengers will have to be zero-emission, i.e., electric, plug-in hybrid, or hydrogen vehicles. In addition, the text would effectively ban gasoline and diesel vehicles.

At the same time, the regulation is to tighten emission standards for internal combustion engine vehicles gradually.

In the summer of 2021, US President Joe Biden signed an executive order setting a goal that by 2030, half of all cars sold in the US should be zero-emission.

Electric cars today are the fastest-growing segment of the auto industry, and sales of pure electric vehicles in the US, which has long lagged behind Europe in this segment, have surged in recent months. According to Cox Automotive, it accounted for 5,6% of vehicle sales in the second quarter.

Last year in January, General Motors already announced that it would sell only zero-emission vehicles by 2035. The move, one of the most ambitious in the US auto industry, is part of a broader plan by the company to become carbon neutral by 2040.

According to Governor Kathy Hochul, New York State’s climate plan is “the most aggressive climate and clean energy initiative in the nation”, and it is on the path to achieving its goal of a zero-emission electricity sector by 2040, including 70% renewable energy generation by 2030, and to reach economy-wide carbon neutrality.  To achieve this goal and to reduce greenhouse gases by 85% by 2050, it will invest more than 45 million dollars in large-scale renewable and transmission projects across the state.