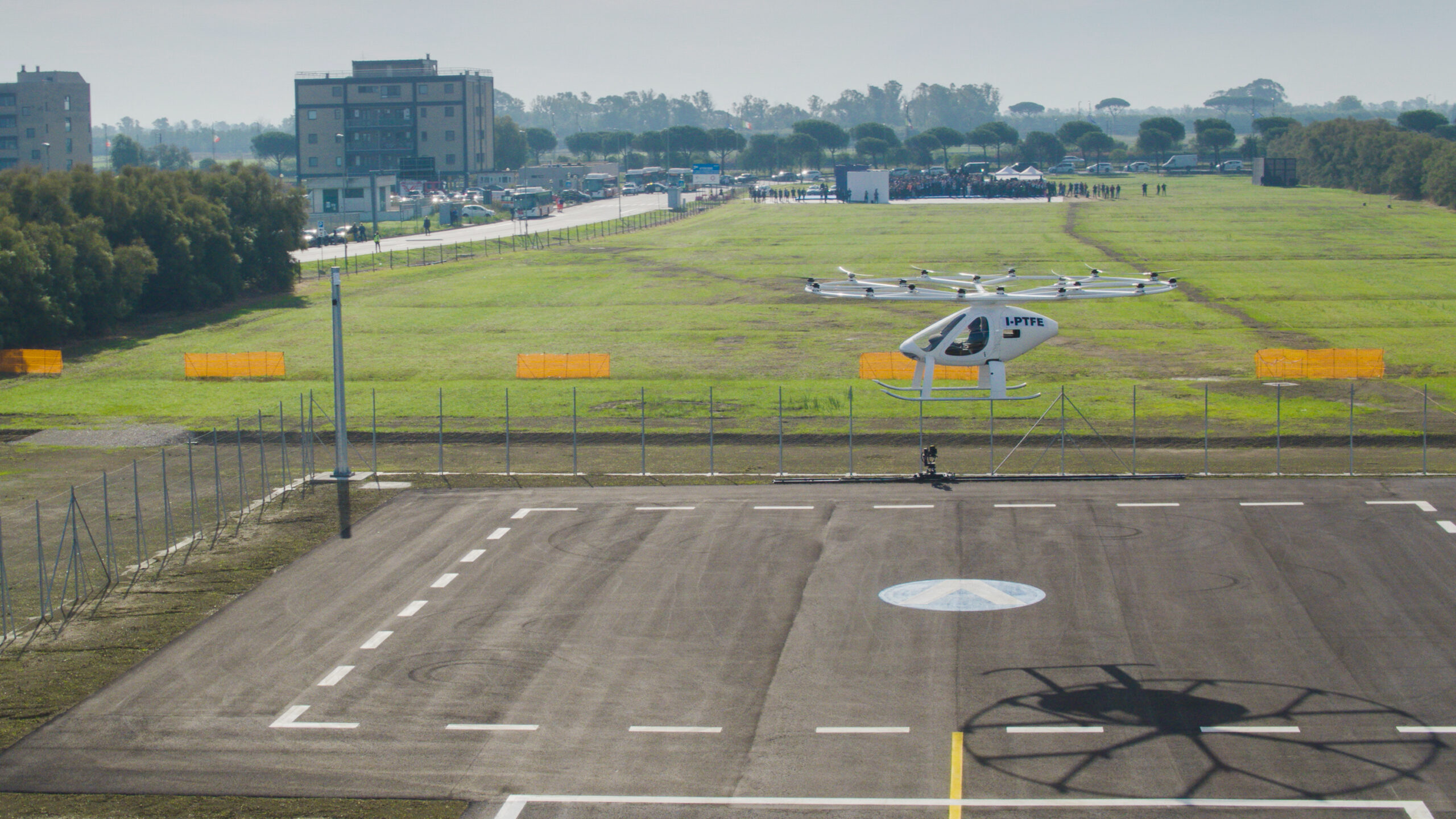 With its first demonstration flight at Fiumicino airport, Volocopter is one step closer to emission-free air taxi rides /Volocopter

German air mobility company Volocopter has taken the next step on its roadmap toward offering flying taxi services. At Fiumicino Airport in Rome, their 2X electric air taxi took off in front of onlookers from the media and airport officials. The test flight is a prelude to offering real taxi rides in 2024.

While the test flight itself wasn’t all that spectacular – the pilot flew for five minutes at 40 meters height following an eight-figure – the lift-off at the Italian airport marks a milestone for the company and the sector.

After the unveiling of a prototype last year, Volocopter has proven that its taxi works in actual conditions at the right place, and that air rides can become a valuable mobility alternative.

Volocopter plans to launch an air bridge between Fiumicino airport and the heart of Rome as of 2024. Air transport shouldn’t take longer than 20 minutes, which is twice as fast as by car in undisturbed traffic.

eVTOLs like Volocopter’s 2X are basically manned drones. They can take off and land vertically, which isn’t much different than a helicopter. The main benefit lies in their zero-emission operation.

Part of the puzzle

Helicopters burn fuel, emit noise, and are less safe because they usually rely on a single main rotor. When they come into service, a professional pilot will fly the passengers of the eVTOLs to and from their destinations.

Developing and manufacturing drones is only one part of the bigger puzzle that the future must put in place if air taxi’s really want to take off. Vertiports’ construction and expansion (vertical airports’ abbreviation) are likewise essential. It’s about building a new mobility ecosystem.

At Leanardo da Vinci Airport, a vertiport has already been designed – and inaugurated. The task is now for partner UrbanV to roll out a network across the city of Rome.

Marco Tronconi, CEO of the airport in Rome, commented: “The opening of the first vertiport in Italy and the first crewed eVTOL flight represent a remarkable step toward the activation of the first AAM routes between Fiumicino airport and Rome city center by the end of 2024.”

As for passenger profiles, Tronconi also acknowledged that they are not aiming for business people as such and added that the air route will be implemented to “welcome the international tourist flows with a ground-breaking, innovative service.”

The choice of Rome as Volocopter’s first base is no coincidence either. According to a survey from EASA (European Union Aviation Safety), the capital of Italy is one of the most suitable cities in the world for implementing urban air mobility.