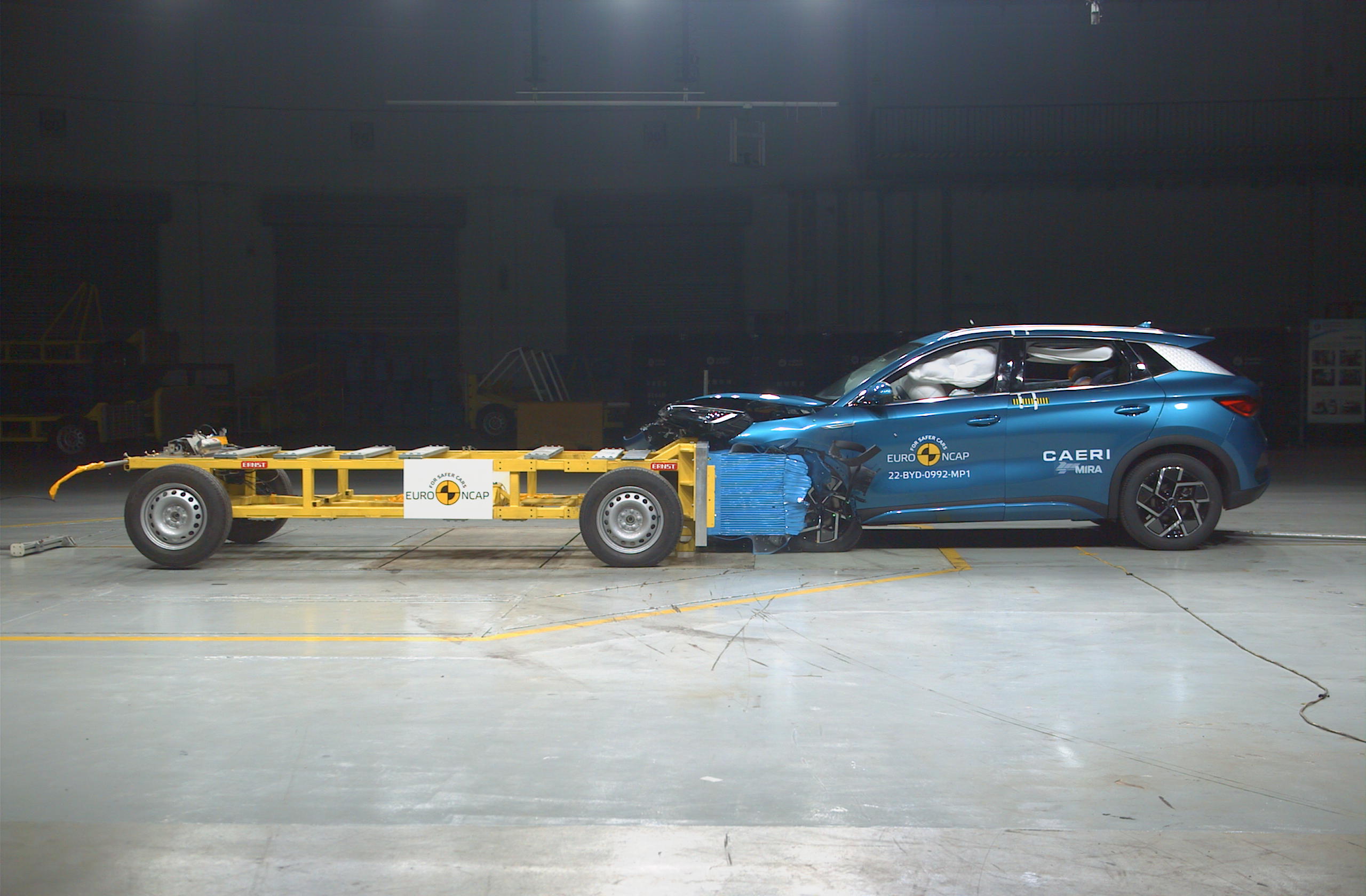 Chinese-built cars confirm once more in the latest scorecard of Euro NCAP. With the low-priced Atto 3, BYD is joining the five-star ranking achieved by the Ora Funky Cat and the Wey Coffee 01 in the previous fifth round. These results pile up to the top scores, already begotten by compatriots Nio, Lynk & Co, and MG.

As a more affordable offer in the EV market, the Chinese-built Atto 3, launched in the Benelux last month and expected to retail for €38 000, doesn’t neglect its safety groundwork.

Not only does it reap five stars overall, but the compact SUV was awarded a score of 89% for child protection, 69% for vulnerable road users, and 74% for its safety systems. That’s a tailwind for a brand moving from buses to the private market with a passenger vehicle.

Eight out of ten

With improved crash compatibility due to the lack of a combustion engine in front, another battery-powered participant also showed excellent resistance against Euro NCAP’s wall. Finally, the Mercedes EQE got awarded five stars and received a ‘very good’ label for its ADAS assistance systems, a sacrosanct technology for Mercedes.

All the other cars in the five-star league came equipped with a combustion engine: BMW X1 and 2 Series Active Tourer, the Seat Ibiza and Arona, the updated VW Golf, and Mazda CX-60. Of the ten cars tested, eight were awarded the maximum.

An interesting candidate is the Mobilize Limo, dubbed the ‘The only car that’s not for sale’. It’s the all-electric sedan from Renault’s mobility branch, aiming at professionals (taxi, car-sharing, et cetera). It is co-developed with Chinese builder Jiangling – though it can be privately bought in Turkey.

Unfortunately, the Limo didn’t get beyond four stars due to an intrusion in the passenger cell and body protection, leaving room for improvement. The same rating applied to the Citroën CX-5.

A few days ago, Euro NCAP also acknowledged that it didn’t find any irregularities after investigating the possibility of a cheat device used by Tesla. In the previous round, the Model Y attained a record-high score. Still, simultaneously a well-known hacker spotted the presence of an NCAP crash testing mode in Tesla’s software (you can read it here), presumably based on geofencing.

In a dialogue with the American news channel CNN, Euro NCAP program director Aled Williams stated: “So far, Euro NCAP’s investigations have not revealed any evidence of an attempt to ‘cheat’ the tests by Tesla.” On confronting the carmaker with the possible use of geofencing, he replied: “GPS location (…) is one of the possibilities we put to Tesla, and they absolutely deny that this is done.”