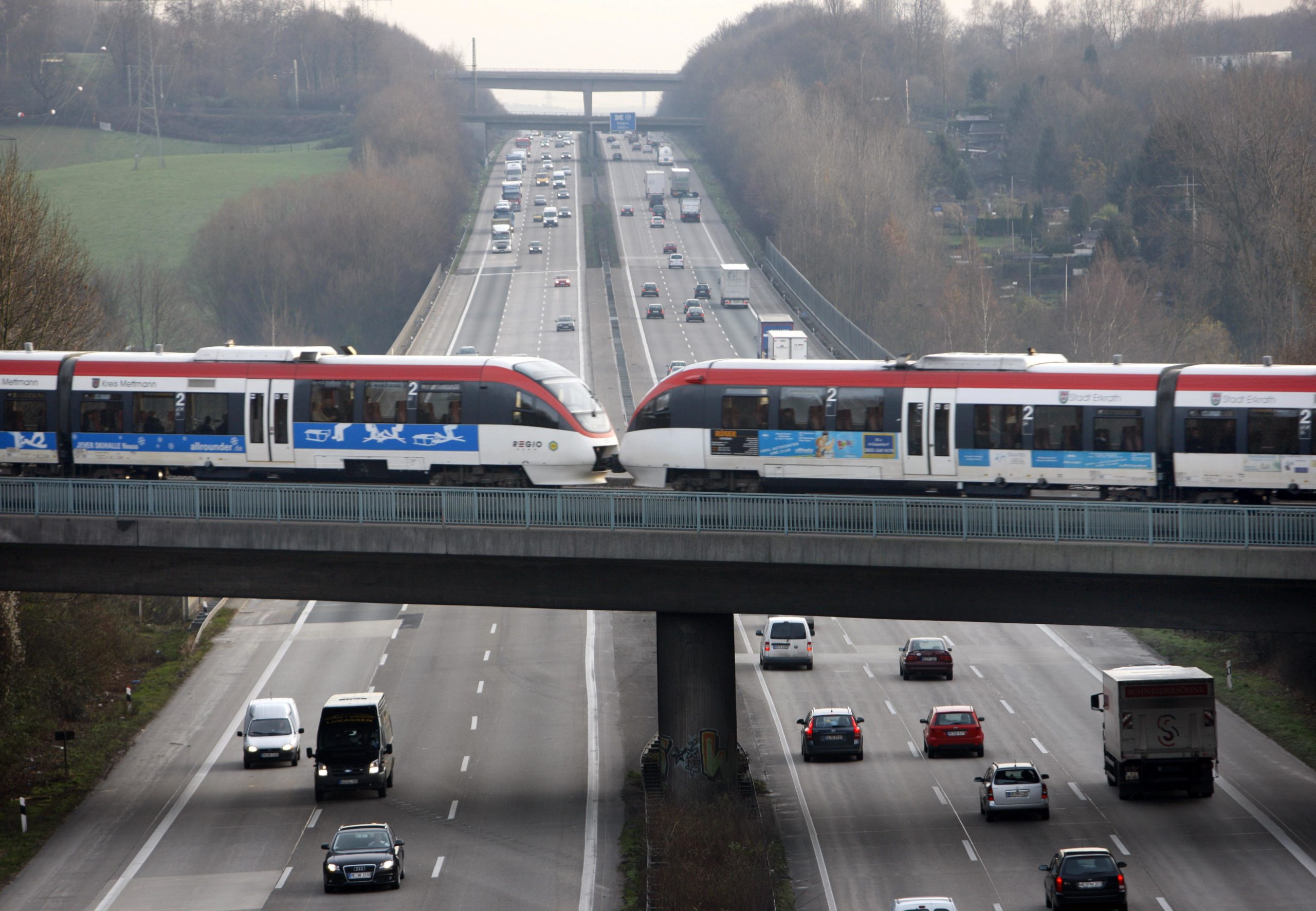 Local train, commuter train, crossing the A3 highway near Mettman, Erkrath, North Rhine-Westphalia, Germany. The gap between those who can still afford an expensive electric car or who have to opt for public transport is widening /Imagebroker

At least seven out of ten motorists believe that driving a car requires financial sacrifices, but 72% say they cannot do without one. So says the annual barometer conducted in 18 countries worldwide by the Cetelem Observatory, the economic research and intelligence unit of BNP Paribas.

Nearly two-thirds of those surveyed fear they will no longer be able to own a car in the future, particularly in Turkey, Mexico, South Africa, Portugal, and Brazil. The Netherlands is the only country where this opinion does not find a majority (49%). Italy and China have similar scores.

According to the survey, motorists initially see this loss negatively, with the fear of no longer being able to travel as they wish as the first thing on their minds. However, only 20% see it as a positive gesture for the environment.

When asked if they would like to give up their car, in Europe, 8% answered yes, definitely, 20% yes, probably, 37% no, probably not, and 35% no, definitely not. But most motorists find that traveling without a car is difficult because they can’t then get around the way they want to, and it is harder to travel in that case, with longer journeys and less comfort. It is worth noting that these two criteria occupy either first or second place in all countries surveyed.

Nearly six out of ten people say they have already given up traveling because of the cost involved, particularly in countries with the weakest economies, such as Turkey or South Africa.

A third of motorists also say they are walking, cycling, or using an e-scooter more often, but for 65% of respondents, the first thing to do is to reduce the budget. Again, the items that come first are fuels (67% on average in the EU) and cost prohibited to parking (26%), followed by maintenance (23%).

The car industry will not welcome it with cheers, but from Germany to Brazil to France, more than one in two people have either sold one of their household vehicles or are planning to do so in the near future.

The under -35s are more inclined to do without a car altogether, at 34%, compared with 26% for the older generations.

In general, sales of new cars peaked in 2017, with around 70 million units sold. Still, the rebound in 2021 cannot mask a downward trend, as a return to normal supply, especially of semiconductors and shipments, is not expected in the immediate future. The average price paid for a car was 16 181 euros.

That manufacturers are investing massively in electric cars is also not new, but it is still interesting to present these figures from Global Data. According to Global Data, manufacturers’ investments in the development of electric cars are likely to be substantial. Six hundred billion dollars should be spent over the next decade. At the forefront are the Volkswagen group ($100 billion), Stellantis and General Motors ($80 billion), Toyota ($70 billion), Mercedes, and the Renault-Nissan-Mitsubishi alliance ($40 billion).

Side point: only 1% worldwide currently drive electric, compared to 10% with a hybrid.

It should also be noted that the feeling that cars are only for the wealthy is generally accentuated among non-owners of cars since three out of ten share this view. The richer the country, the lower it scores on the so-called effort rate. Noteworthy: in the European zone alone, car prices have risen twice as fast as European household incomes before the 2020-2022 price shock following the pandemic and its effects on limiting supplies.

Second-hand is good in the market

Motorists estimate their annual car budget (fuel, insurance, repairs) at 2 753 euros globally and 2 817 euros in the EU, with gasoline being by far the most expensive item (1 692 euros per year in the EU). At the same time, the cost of insurance and maintenance, respectively 572 and 553 euros on average in the EU, are considered reasonable by most households, even if they are rising sharply.

Due to the health crisis, the associated travel restrictions and the massive deployment of teleworking have contributed to a significant reduction in traffic and, in turn, in claims and reimbursements made by insurers.

Similarly, the purchase price of cars is considered reasonable by many motorists, especially the vast majority who buy on the second-hand market. For example, 77% of second-hand vehicle buyers are satisfied with the price of their vehicle, compared with only 57% of the buyers of new vehicles.

In Europe, 39% of respondents also think the fuel price is too high. The time when you could fill up cheaply in the US is also over because even there, 42% of participants think the fuel price is too high. Therefore, prices at the pump have risen dramatically worldwide, even by more than 50% for diesel fuel in the US and Mexico, making consumers forget that they remain low compared to those in other countries.

Just over one in five people would like to see the development of public transport and aid for purchasing electric vehicles, solutions favored by city-dwellers.

Anyhow, in all life situations, the car remains without question the preferred means of travel. This is particularly true regarding shopping or sports activities (nine out of ten people). However, the rate drops slightly for daily travel, including work-related travel. In that case, 75% take their car, although this is down by five points compared to last year – no doubt due to the impact of the health crisis and teleworking.

In general, you can say that car use and public transport use are roughly equal in Europe. 45% of correspondents systematically use the car for daily trips, such as commuting, and 47% use soft mobility, public transport, or train. Car-sharing or car-pooling remains very low, with 8% in Europe, and 11% globally.

Have versus have nots

Cetelem Observatorium also notes that motorists are not ready for whatever the cost of the car. An electric car can be a way, but not at any price. “Today, as things stand, there is a risk that an economic and social divide will be created concerning the car, pushing to the margins those who need it most in their daily lives,” concludes the organization.

At the same time, Cetelem Observatorium also remarks that the potential advent of an electric low-cost electric car seems likely, offering the possibility for the greatest number of people to access this technology at a lower cost. However, this comes with the risk of lasting loss of influence by Western manufacturers due to cheaper Asian brands.