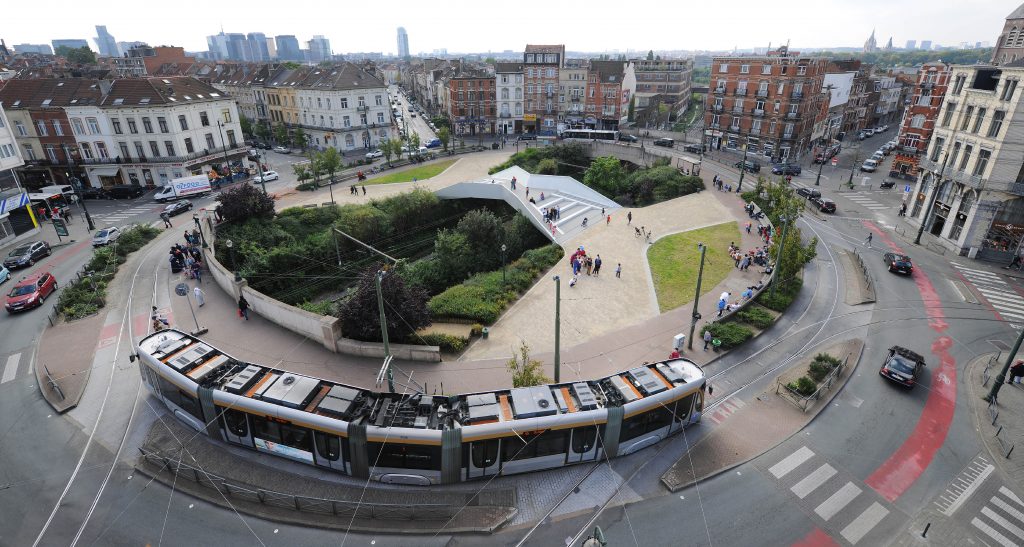 With its Good Move plan, Brussels wants to improve mobility in 50 neighborhoods by 2030. In addition, the plan should improve safety, air quality, and living comfort for residents.

In Schaerbeek, the circulation plan was already deployed in several neighborhoods. Therefore, the plan will be retained in those neighborhoods, but DéFI-mayor Cécile Jodogne’s office does report that there will already be a slight modification in the Bear pit neighborhood. The changed traffic situation has been causing protests for two days since Monday’s introduction.

The municipality also reported that it continues to carry out daily evaluations and is open to further changes. However, the protesting residents accuse the executive council of lacking consultation following the roll-out of the new traffic situation, something contradicted by both the cabinet and the Brussels Mobility Minister, Elke Van den Brandt (Ecolo).

At the protests of several dozen dissatisfied people, fixed traffic signs were daubed with paint, and detached traffic signs were taken away. Bollards blocking the square in question were loosened with the permission of the police. The demonstration even ended up injuring two policemen and a firefighter.

Meanwhile, the SDZ, an interprofessional federation of self-employed entrepreneurs, demands the withdrawal of the Good Move circulation plan and the restoration of the original situation in the Brussels Region. According to the SDZ, the mobility plan has “very negative effects on the region’s economy.”

They say some of the clientele avoids the shops, and journeys, both in time and distance, are lengthened. Deliveries and parking are a big problem, the SDZ observed after two months, though it does not come up with exact figures based on facts.

“We are in the midst of an unprecedented economic crisis. In this context, the Good Move plan is the last straw that breaks the camel’s back for our Brussels entrepreneurs, who are simply in danger of having to leave or even close their doors”, says SDZ president Daniel Cauwel.

‘More needs to be done’

In a reaction, Brussels Minister of Road Safety and Mobility Elke Van den Brandt (Groen), who strongly condemned the vandalism and the use of violence, said that firm efforts were made to inform the population about the circulation plans.

“That plan was worked on for more than two years; there were meetings, people on the ground handing out information leaflets, letters were put in the mailboxes (…). We can only conclude that more needs to be done. We must see how we can learn from this”, Minister Van den Brandt concluded.

Meanwhile, several online petitions from supporters and opponents against the circulation plan are circulating. These are currently flirting with several thousand signatures each. However, the fact remains that the opposition to the project does not leave some local majorities insensitive, while others continue to roll out the plan.

On Monday, Ixelles/Elsene setter up the first phase of its Flagey-Etangs plans, and the City of Brussels is continuing the process in the Pentagon. In contrast, Woluwe-Saint-Lambert had rejected the proposals of its design office, and Anderlecht will start from scratch with its Cureghem Good Move plan. And the process is taking longer in Molenbeek, Jette, and Saint-Gilles, which are choosing to prolong the discussions.

In turn, several municipalities where the plan has yet to be implemented, such as Uccle or Auderghem, are currently taking a wait-and-see attitude. Each day brings the 2024 electoral deadline closer.

As the newspaper Le Soir writes, the municipalities will become more reluctant to embark on the adventure as time goes by. Brussels Minister Elke Van den Brandt is aware of the danger.

As far as current projects are concerned, she reminds us that each entity can move forward at its own pace. However, for the upcoming call for projects, she will make the terms of participation more flexible so that the municipalities have more time to prepare their applications.

In any way, the Minister, who only last week saw her proposal to organize two car-free Sundays in the Brussels region rejected by the 19 mayors, wants to avoid the status quo.

“No one can say that the current situation is good regarding mobility. We have a lot of air pollution, road safety concerns, and noise. So, we have to do something else.”