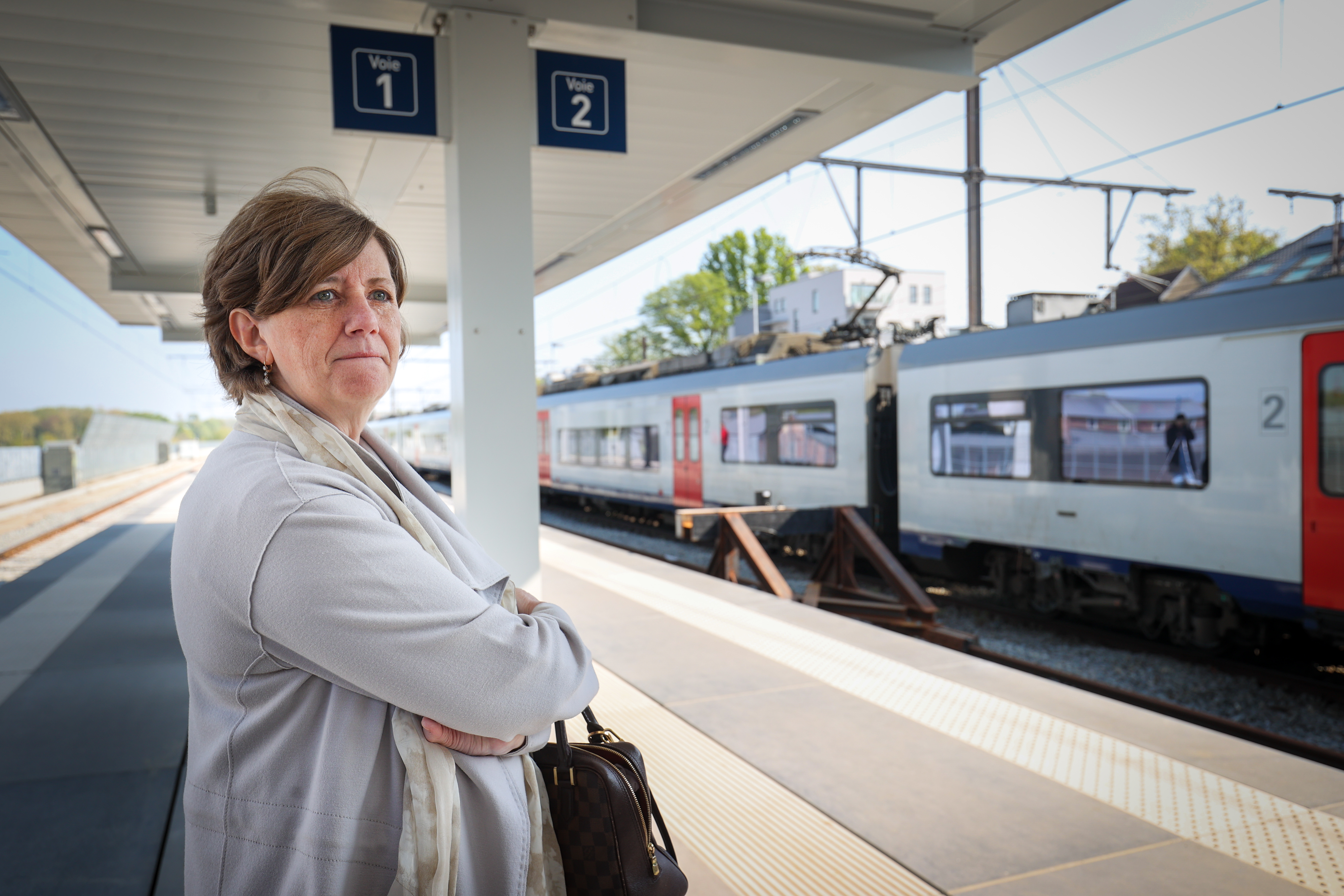 NMBS/SNCB CEO Sophie Dutordoir pictured during the inauguration of the new railway station in Nivelles, April 2022. The CEO has to look for savings now that it is getting less money from the government than previously promised /Belga

Belgian railway NMBS/SNCB must postpone a number of investments planned for 2023-2024 until the following years. This is the result of a decision by the federal government after the budget conclave that means NMBS/SNCB will receive less money than first promised.

In 2024, NMBS/SNCB’s debt threatens to exceed 3 billion euros, well above the imposed debt ceiling that now has been raised to 2,56 billion euros. Cuts consequently seem insurmountable. “It will be a particularly complex exercise, which we intend to make together with rail manager Infrabel over the next two years,” said NMBS/SNCB top woman Sophie Dutordoir in the Mobility Parliamentary Committee on Wednesday.

NMBS/SNCB had requested more than a billion euros extra for the following years, given the expected doubling of the power bill in 2023, to 432 million euros – the company is Belgium’s biggest electricity consumer – and numerous wage indexations. But in the federal budget, the railway company got ‘only’ an extra 234 million euros, in the form of partial energy compensation and lower employer contributions.

For the period after 2025 to 2032 – a 10-year budgetary framework coinciding with the management contract has been established for the first time – there would then be more additional money flowing into the NMBS/SNCB, even though the needs will be less.

“So, we will have to align our ambitions not only in size but also in time. The acute period is situated for 2023-2024,” Dutordoir said, referring to the debt ceiling (2,7 billion euros), which, without additional savings, threatens to fall already next year and even exceed 3 billion euros in 2024.

Recruitments will go on

In addition to the planned efficiency improvements, NMBS/SNCB will have to postpone projects it would have liked to have done from 1 January. At the operating level, costs are going to be reduced where possible.

However, Dutordoir already formulated a red line: the pressure must be reduced by deploying new equipment, and planned recruitments will not be touched. The natural outflow of staff at NMBS/SNCB is below the market average at 2%, but at the same time, the company wants to continue to make a full commitment to recruitment in the coming years. Dutordoir pointed out that this is the only way to break the vicious circle where travelers and staff drop out.

On the staffing front, NMBS/SNCB is still 300 people short: 16 700 instead of the 17 000 needed to keep the service running smoothly, Dutordoir acknowledged. She noted that all 1 300 planned recruitments this year had been filled, but some 300 are not yet at work.

The CEO hinted that she also wants to have the current service on point before expanding.

NMBS/SNCB, meanwhile, is once again at 93% of its pre-corona passenger number. The Belgian railway company is thus doing better than, say, the Netherlands (82%) or the UK (76%). “Many customers are returning, but not enough,” Dutordoir said.

Positively, though, single ticket sales have increased (+7%) versus before corona. “Especially when the weather is nice on weekends, trains are in the running for leisure travel,” Dutordoir explained.

NMBS/SNCB’s punctuality is currently at 90,5%, which is lower than the previous two years. The CEO referred to the many material incidents because of delays with the delivery of new rolling stock. “We got 220 of the 445 railcars ordered from Alstom, but the rest that would normally be delivered by the end of 2021 were pushed back to the end of 2023.”

Infrastructure problems and the resurgence of copper thefts also weigh on punctuality, but also and especially people crossing the tracks. “Those account for half of the canceled trains.”

Less punctual trains also lead to more passenger dissatisfaction: the percentage of satisfied customers dropped from a record 77% in 2021 to provisionally 71,1% this year.

Dutordoir also did say she does not want to know anything about tempering ambitions in the new management agreement, which she is currently negotiating with Mobility Minister Georges Gilkinet (Ecolo). For passenger traffic, the target is 30% more passengers by 2032. This is by running more trains (at least 4 220 on weekdays versus 3 800 today), better frequency, and more early and late trains. The train should also become more attractive and accessible.