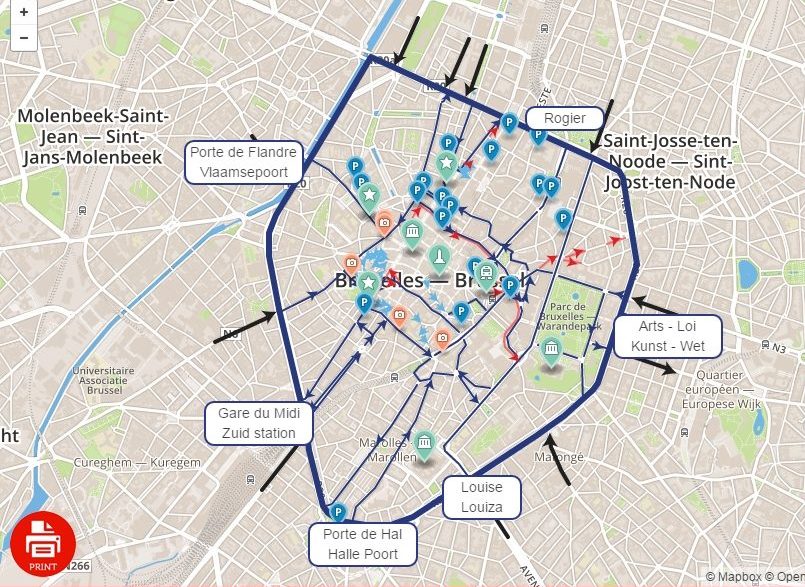 From the end of November, traffic filters go into operation in the Pentagon. The filters with number plate recognition system are part of the 2nd phase of Good Move /Map Box

At the end of November, the city of Brussels will inaugurate the second phase of Good Move, the circulation plan to make the Brussels Region a more car-free zone, reports the newspaper Le Soir.

Specifically, a dozen traffic filters with ANPR cameras with number plate recognition capabilities will become operational. This means that drivers will no longer be able to drive through certain streets unless they are exempted, like taxis or emergency vehicles. Others will get a warning first and will be fined automatically afterward.

In Brussels, Good Move was introduced in mid-summer, on 16 August. In that first phase, eight traffic loops were introduced in the so-called Pentagon, Brussels’ city center; the second phase takes effect from the end of November.

Ambulances, police, fire brigades, taxis, and maintenance vehicles will be allowed to drive through. Provided conditions are met; shopkeepers, couriers, or professionals such as home nurses will also be able to pass.

Some systems have a system of retractable bollards, such as in the Rue Haute, Rue des Six Jetons, and Rue du Marais. For certain bollards, residents and garage owners also will be able to apply for an exemption.

The ANPR camera system was planned to be operational by the beginning of October. Its implementation has, therefore, been slightly delayed, writes Le Soir. “This is the first time that this system has been implemented in the City of Brussels,” explains the Brussels Alderman for Mobility’s office, Bart Dhondt. “We want to be sure that everything works before we activate it. Furthermore, we want to avoid people being fined even though they had a permit.”

Those without an exemption will first receive a warning letter. And then, if it happens again, a municipal administrative sanction. The amount of the administrative penalties will be 58 euros.

In the meantime, the local authorities are making significant efforts to communicate with traders because the number of derogations requested is still low. The timing, for example, has been pushed back a little to give businesses time to apply. But unfortunately, several businesses were not aware of these possibilities.