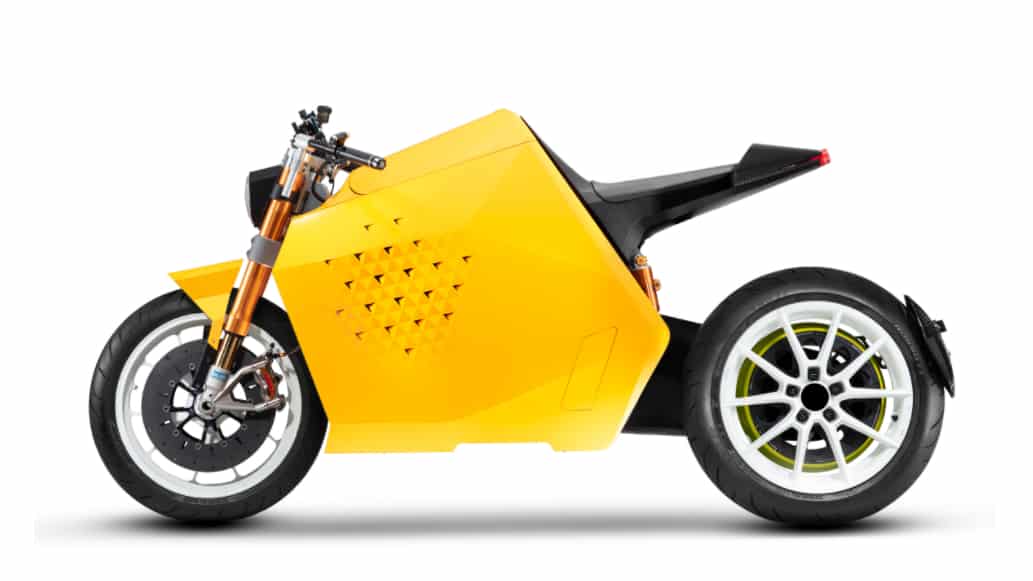 More than a street bike, the Chinese-made DC 100 can be summoned and is capable of a self-leveling act. /Davinci

The DC 100 looks the part and certainly isn’t an electric motorbike like the ones we’ve seen so far. This ultra-fast and ultra-luxury street bike has more than speed and looks but also robotic abilities that make it self-leveling and self-riding.

Davinci unveiled the DC 100 at EICMA, the global motorbike show in Milan. It represents the official introduction of the Chinese startup brand in Europe. An introduction that won’t go unnoticed, thanks to its futuristic and sturdy design approach. The company says that the genesis of the bike took seven years.

The specifications of this striking café racer don’t fail to wow, either. Equipped with an AC motor, sitting directly at the rear wheel, this zero-emission bike churns out 135 hp, accelerating in roughly three seconds from 0-100 km/h. The top speed sits at 200 km/h. In addition, the DC 100 provides an impressive range of 357 kilometers (WLTP), which can be recharged in half an hour at an appropriate DC station.

Relying on 1 000 chips and 200 sensors, the DC 100 also has sensing capabilities, making it capable of leveling itself. Apart from the balancing act, the bike can interact with important information such as outside temperature and road conditions.

The company also claims that several ride-assistance systems are standard to make it easier to cope with a two-wheeler that is obviously competing in the performance class of 1 000 cc bikes. Therefore, it will come with a reverse assist, hill start assist, and hill descent control. On top of that, it has self-riding capabilities, following a leading vehicle.

As for technology, the DC 100 is as modern as you want. There’s no dashboard, only a slot for smartphones, and over-the-air updates facilitate upgradeability. Deemed half robot, it won’t be a surprise that the bike can be called upon remotely and features self-parking capability.

“We are extremely excited to be officially launching in the EU market, which is strategically important for Davinci,” said Rosanna Libia, Davinci Motor international business manager and continued: “We are proud to introduce the brand and the DC100, the symbol of our craftmanship and innovation in R&D.”

All DC 100 models will be built in Zibo, China. Potential customers can start pre-ordering their bikes which will cost around 26 000 euros. Deliveries are scheduled for beginning in mid-2023.
Davinci can benefit from a headstart since all-electric bikes are still very much an exception.

Harley-Davidson has presented two models through its subsidiary Livewire; Ducati is working on a street version of its racing bike in MotoE, and Honda has announced that it will launch ten e-bikes by 2025.