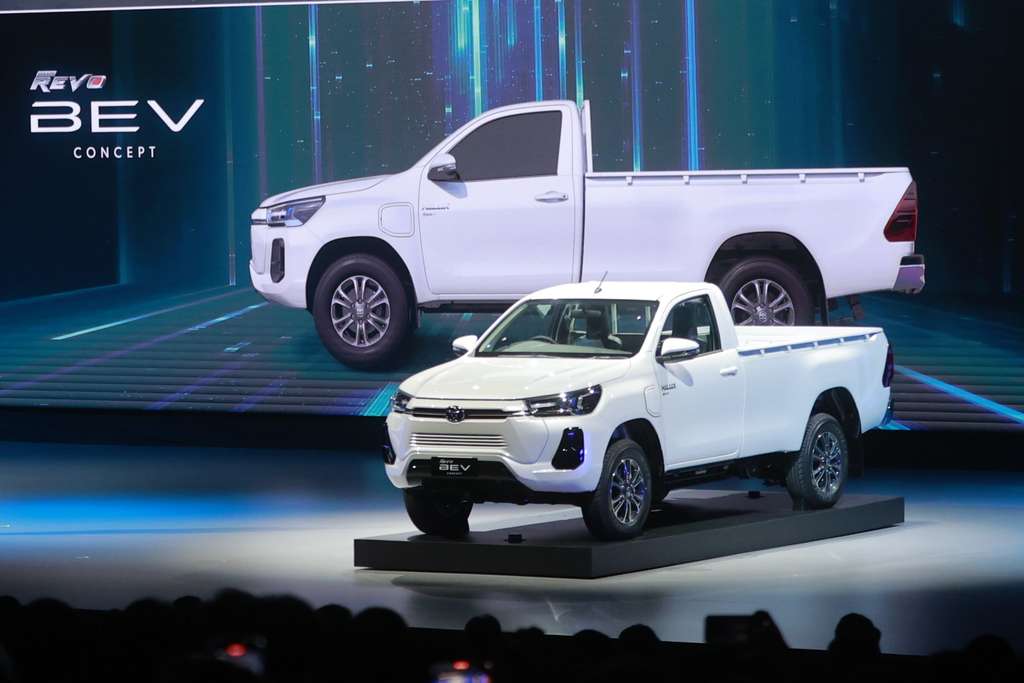 For the popular Hilux Toyota isn’t betting exclusively on hydrogen, but also on battery power. /Toyota

The Japanese carmaker is adding up zero-emission versions of its pick-up Hilux. Joining the hydrogen prototype is a concept built around battery power.

The Hilux Revo BEV Concept was unveiled at an anniversary event in Thailand, celebrating Toyota’s 60-year presence in the country. It’s a clear nod that the company is working on a battery version of the famous pick-up.

Toyota’s scope of global decarbonization pivots on a multi-tech approach, focusing on developing and marketing a diverse range of clean powertrains as the best fit for different regions.

And though pick-ups are rough workers suited for extreme environments where charging infrastructure isn’t exactly available in abundance, all-electric versions are a hot trend, especially in the States, since Ford released the F-150 Lightning, Chevrolet it’s Silverado EV, and Tesla the Cybertruck.

No wonder a Tacoma-like vehicle could be spotted during its road show last year, in which Akio Toyoda unveiled 30 EVs for the future. But now it seems that the carmaker has a change of heart and opted for electrifying its most popular pick-up in the world: the Hilux.

The concept version was previewed in Thailand during a birthday party. It was joined by a second utility vehicle, the IMV 0 (Innovative International Multi-Purpose Vehicle), a more affordable workhorse built to enhance mobility in developing regions.

The South-Asian country is Toyota’s hub for Hilux production. Commenting on the pair of vehicles, the CEO of Toyota, Akio Toyoda, said: “Between them, they represent two different ends of the automotive spectrum, for different needs and different customers. One was to support economic growth, and one was to support carbon neutrality.”

Based on the ICE model

Not difficult guessing which is which, then. Unfortunately, Toyota didn’t provide any details on the driveline, the battery capacity, the launch of the EV version, or the regional marketing strategy.

Clearly, a battery-powered pick-up stands a better chance in European showrooms, with a ban on diesel and gasoline engines as of 2035, and the United States than in the exotic parts of the world. Not to mention the carbon-intensive electricity production plaguing the Asia-Pacific region.

But the proportions of the clean-looking, tooth-paste white vehicle unveil that the technology is based on the ICE version of the car. It’s a conversion, not a dedicated developed architecture for the BEV class.

During the event, Toyoda also commented on criticism regarding his company’s electrification strategy: “I believe we should be realistic about when society will be ready to embrace BEVs in full. (…) I think their adoption will take longer than the media want us to believe.”