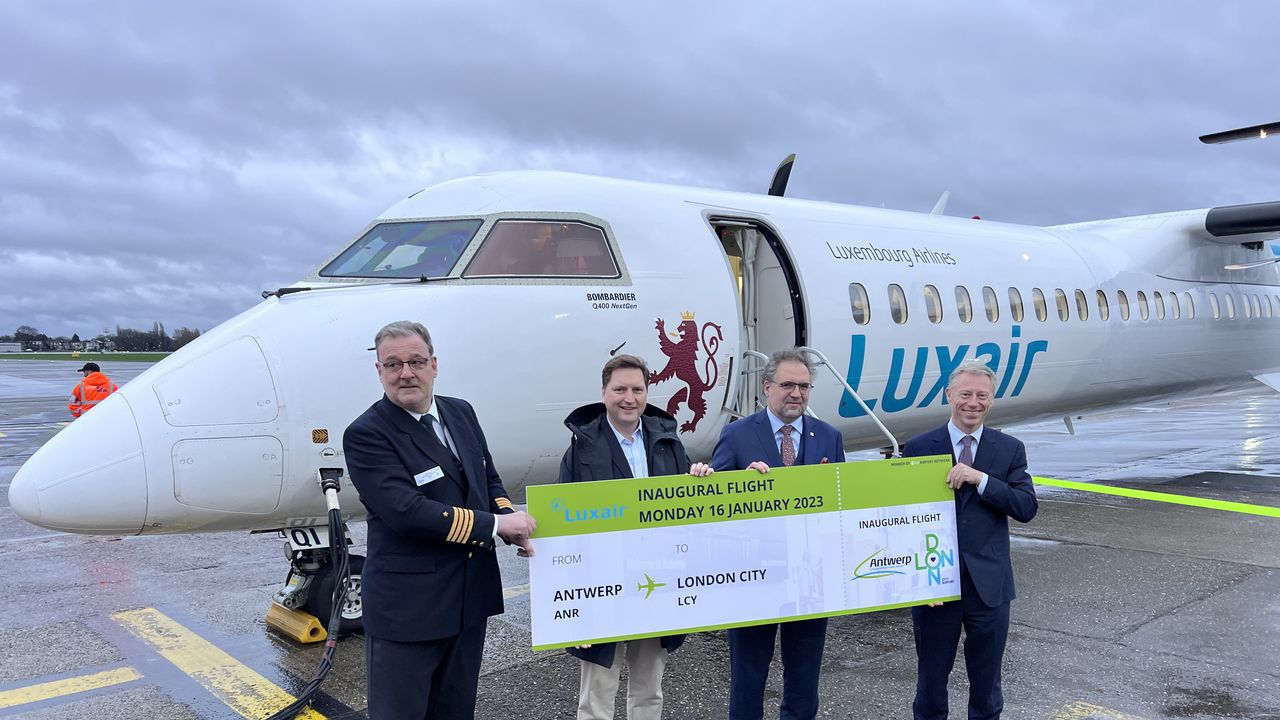 There are once again direct flights between Antwerp and London. Luxembourg-based Luxair will now fly from Antwerp to London City Airport four times a week /Antwerp Airport

Antwerp Airport reopened its connection with London on Monday. Luxembourg-based airline Luxair is responsible for the link to London City Airport. In the first phase, they will fly to the British capital four times a week.

Although flying is climate-friendly compared to before, traveling by Eurostar remains a good deal less polluting, even if the journey is slightly longer. Last year, the airport welcomed nearly 240 000 passengers.

No return flight on the same day

The various stakeholders at and around the airport call the relaunch “a milestone” for tourism and business. “For those who want to get from England to Europe, this is the fastest and most pleasant way to travel,” they put themselves in the market.

From Deurne, there will be flights to London City Airport, about 15 km from Piccadilly Circus. The flight, with aircraft such as, for example, the Q400 (good for 76 seats), takes about an hour, saving you two to three hours compared to traveling by train.

Luxair will thus fly to London four times a week, from March even five times. Remarkable: booking a return flight on the same day as the outward flight is impossible, making this kind of flight unattractive for rushed business people.

With the support of the Flemish government

In four years, Luxair is already the fourth airline to fly on that route. But unfortunately, the corona crisis did not improve things for Air Antwerp, the previous operator of the connection, while Antwerp Airport has been loss-making for years.

Yet, after a lot of lobbying and months of studies, the Flemish government approved the expansion of the regional airport in Deurne, Ostend-Bruges, and Kortrijk-Wevelgem.

It did so for both tourist and business flights. The relaunch of the line with London fits right into that picture. Ari Epstein of Antwerp Diamond Center, for example, helped introduce Luxair at Deurne Airport at the request of the airport’s CEO, Eric Dumas.

“The signal from the Flemish government was very positive,” says Antwerp Alderman for Mobility and Tourism Koen Kennis (N-VA). “It was recognized that regional airports contribute to the local economy.”

Still, there remain a lot of opponents of the extensions in Antwerp and Ostend in particular. They point to the millions in taxpayers’ money going to the airports and the proximity of Brussels Airport, at half an hour by train. And according to calculations by a transport economist, CO2 emissions per Antwerp passenger are still ten times higher than those of a Eurostar passenger.

None of the three Flemish regional airports are profitable without the Flemish government’s support. Nevertheless, the government has decided to approve the future vision of the airports until 2040 and thus keep them open. Annually, the government pays over 200 million subsidies for the three airports combined.

The mandatory renewal of environmental permits next year and possible construction violations from the past also worry opponents.

Proponents point to Antwerp’s role as a metropolis with its port and diamond industry. Of course, tourism in Flanders can also reap the benefits. And finally, the airport is important in the context of military purposes and flight training, even though Defence has its own air base in Melsbroek near Brussels.

The regional airports of Antwerp and Ostend, which receive cargo, are operated by the French multinational Egis, a group active in the consulting, construction engineering, and mobility service sectors. They pay an annual concession of 254 000 euros to the Flemish region.

In the future, the airports want to work more efficiently, among other things, by significantly increasing landing fees. But, according to experts, these are far too low. Furthermore, ‘sustainable fuels’, better cooperation with Zaventem, and a single remote tower should create a broader support vase for the regional airports. Final master plans for the regional airports should be ready by the end of 2023.